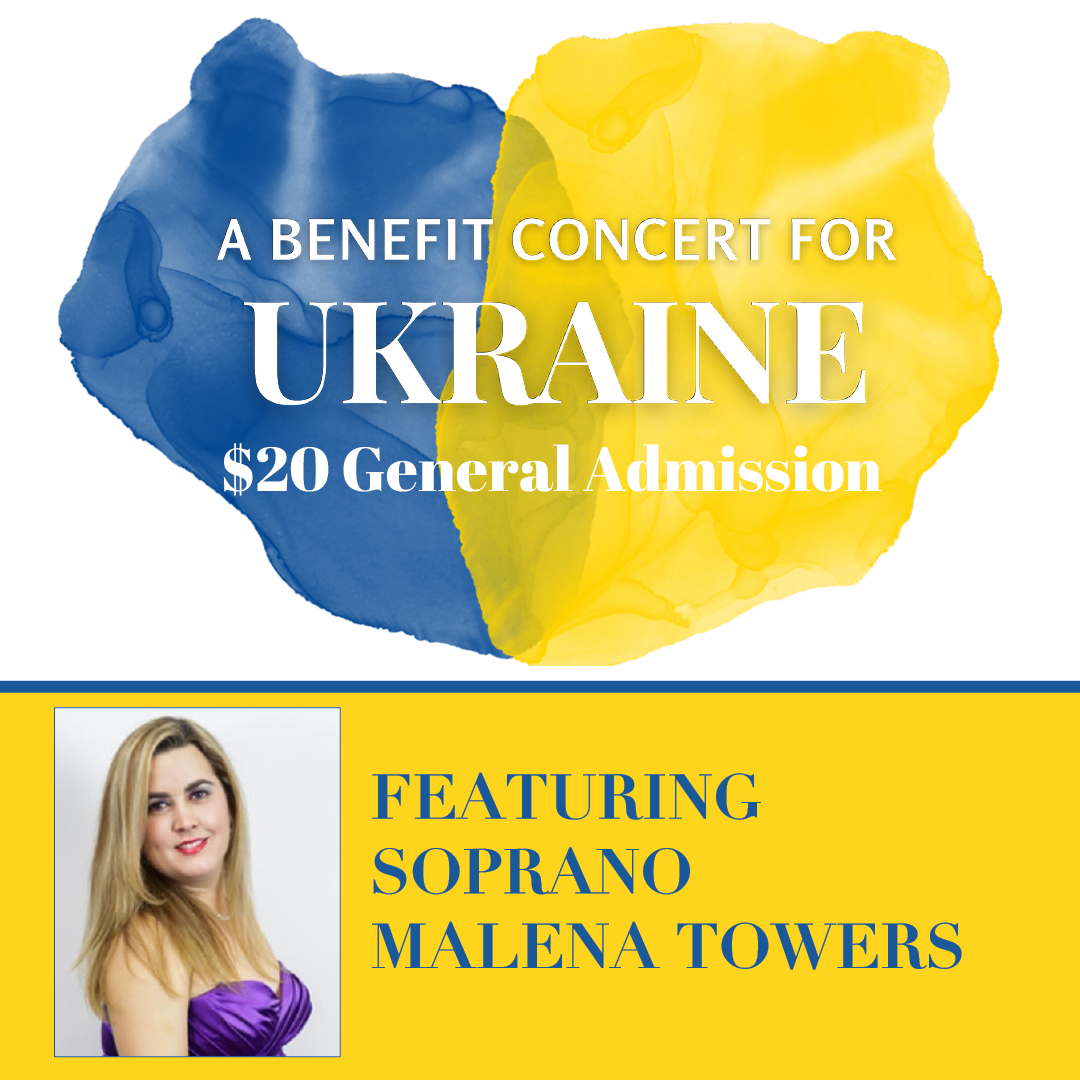 A BENEFIT CONCERT FOR UKRAINE

The Middletown Arts Center is delighted to host a benefit concert for Ukraine featuring award-winning soprano Malena Towers who will perform to music by Vivaldi, Mozart, Puccini and Lloyd Webber. Experience an afternoon that is sure to awaken the love and power of music in your heart on Sunday, June 12 at 4 p.m. Proceeds from the concert will go to Ukrainian children and refugees in America and Europe. There will be a reception to follow with a silent art auction.

Tickets are $20 for general admission and can be purchased online at https://middletownarts.org/a-benefit-concert-for-ukraine or by calling the box office at 732.706.4100. The Middletown Arts Center is located at 36 Church Street in Middletown, NJ (next to the Middletown train station). Free parking is available on site with additional free parking available in the station’s metered car park on weekday evenings after 6:00 p.m. and on weekends.

Malena has given opera, zarzuelas, and classical music concerts, as well as taught in the United States and abroad in Austria, Israel, Spain, Ecuador, Cuba, and Venezuela. She became a finalist in the Jerusalem Opera Program International Voice Competition in 2018. In 2016, she won the award for Outstanding Performer of the Year in Texas. In March 2015, she won first place and the McKinney Award in the National Association of Teachers and Singers (NATS) competition in the Dallas/Fort Worth, Texas Chapter.

She also became a semi-finalist in the Orpheus Vocal competition in Murfreesboro, Tennessee. During this last competition, the jury recognized her with the following words: “You illustrate the artistic characteristics essential to the success of a professional singer. For her performance at this event, she received a summer scholarship to attend the American Institute of Musical Studies (AIMS), Graz, Austria, 2016. Additionally, Malena sang at the Atlantic Music Festival in Waterville, Maine .

In Guayana, Venezuela, she founded the first Bolivar State Opera Company. This company promoted opera stages, workshops, and classical concert opportunities for youth and young adults. Malena had the opportunity to sing in front of an audience of 24,000 teachers and students during the Educational Convention at the San Felix stadium, Venezuela, 2012. Guayana’s press review from the Nueva Prensa and Primicia newspapers was “The melodious voice and the angelic face that captivated the hearts of the people of Guayana. The Cuban soprano Malena Towers has performed successfully in her country and in ours, singing in several venues in the states of Bolivar and Valencia, as well as on television and radio broadcasts”.

She performs and teaches voice in her studio “It’s Music”. She is fluent in English, Spanish and Italian. She also plays the piano and conducts choirs brilliantly.

Our Community: Bikes for Africa, $10,000 for Habitat for Humanity