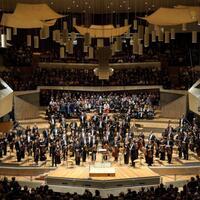 AKM will welcome an Austrian soprano

As part of the 50th Istanbul Music Festival, Austrian soprano Anna Prohaska will take the stage at the Atatürk Cultural Center (AKM) on June 9. During the concert, she will share the stage with the Deutsches Symphonie-Orchester Berlin, which celebrates its 75th anniversary this year.

Attracting attention with her delicate and passionate interpretations, Prohaska has always worked with respected conductors since her debut at the Berlin State Opera. She gives many concerts with Daniel Barenboim, Philippe Jordan and Simon Rattle.
In an exclusive interview, Prohaska answered questions ahead of her concert in Istanbul.

You have shared the stage with some of the most successful conductors and prestigious orchestras in the world. Is there a milestone in your career that holds a special place in your heart?

In the concert repertoire, perhaps my first appearances in Lucerne with the Berlin Philharmonic and Claudio Abbado performing Lulu’s Suite and arias by Mozart. And at the opera my first Sophie in Der Rosenkavalier with Sir Simon Rattle at the Staatsoper Berlin.

Do you remember your first performance on stage? Can you tell us a bit more?

My first opera role was Yniold in Pelléas et Mélisande at 17 at a university performance in Berlin while I was still at school. I was extremely excited to be a part of this amazing piece. The director was Jörn Weisbrodt, Robert Wilson’s assistant at the time. The production was full of symbolism and we had a spiral of real blocks of ice on stage that melted throughout the show – incredibly inventive and beautiful. It became my favorite opera and I was obsessed with it, playing the score on the piano all the time, listening to recordings a hundred times. And my big dream was to sing Mélisande at some point, which I managed to do in Hamburg with Kent Nagano in 2019 – my Pelléas was Rolando Villazòn and my Golaud was Simon Keenlyside. An absolute dream come true. I cried for three days at the end of the project.

You’ve had an amazing career path so far. Do you have any particular milestones you would like to achieve in the future?

To be honest, I will always be obsessed with Handel’s great operas and oratorios. I have done a few, Merab to Saul, Angelica to Orlando, Morgana to Alcine, Poppea to Agrippina, Iphis to Jephthah… Cleopatra is already arriving soon. But Theodora, Rodelinda, Ginevra… there are so many other great heroines that I would like to embody. Now that I’ve sung my first Vitellia with Cecilia Bartoli at La Clemenza, I can imagine singing Donna Elvira and Fiordiligi soon.

You have won many prestigious awards during your career, ranging from Hanns-Eisler-Preis für Komposition und Interpretation zeitgenössischer Musik, Daphne-Preis, Schneider-Schott Music Prize to Echo Deutscher Musikpreis Klassik, Kunstpreis Berlin and International Classical Music Award in Baroque Vocal category. What do the rewards mean to you?

Of course, it’s always nice to be recognized and I’m very grateful for these awards. Especially receiving the Daphne Prize which was an audience award from all theaters in Berlin for the best debuting artist that year meant a lot to me. The commission came to one of our performances of Mozart’s “Abduction from the Seraglio” and gave me the award on stage during the greetings and I had to give a speech – it was like being at the Oscars, unbelievable. But I know a lot of artists who are brilliant and create very interesting projects that don’t win awards. I don’t mean to complain, but the company is of course very nepotistic – if you’re not “in” with the right crowd, you won’t get listed. So, I try not to take pricing too seriously.

You will take the stage with conductor Giovanni Antonini in Ankara. Can you tell us a bit about your process of working with him?

A: Giovanni and I have known each other for a few years now and have recorded a CD – Serpent and Fire – with tunes by Händel, Purcell, Hasse and Cavalli built around the North African queens Dido and Cleopatra with her ensemble Il Giardino Armonico who J ‘ve had the pleasure of working with it a few times now – also with tunes by Mozart and Haydn. Giovanni and I have also built a program around the sacred works of Vivaldi and Bach with the Bavarian Radio Orchestra. We know each other well and have a certain type of shorthand in communication – he’s the perfect accompanist for a singer since he’s a flautist who also survives oxygen and understands the phrasing and breath control of a singer much better than maybe a pianist or a string. player. I find his interpretations of Beethoven and Haydn absolutely revolutionary. There is nothing better.

Have you ever been to Türkiye? If so, can you tell us about your experiences and impressions of the country?

It’s my first time – I’m almost ashamed to say it. I have a lot of Turkish friends in Berlin, and they keep telling me I have to go. So now it’s finally happening! I’m obsessed with archeology and art history so I’m sure to find plenty to do around rehearsals and will be inspired for many more trips to come.