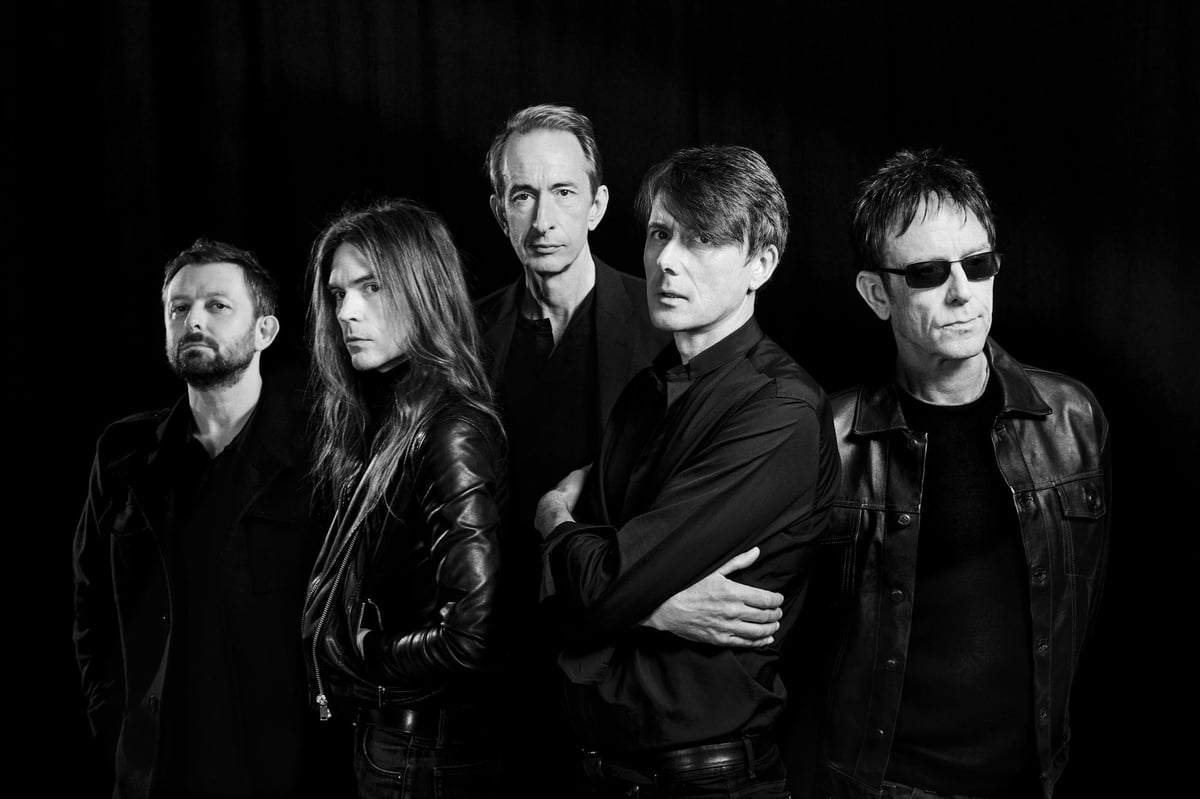 Thirty years ago, Sweden swagger in the spotlight, grabbed the zeitgeist by the throat and held their music press title as Britain’s best new band. Today, their muscular frontman Brett Anderson admits feeling his age.

Following a post-reform trilogy of what could rightly be described as mature comeback albums, Suede’s ninth missive is in part his response to feuds with his 50-somethings – a self-proclaimed “punk” album with their old fool Ed Buller back behind the production desk.

The autofiction is more polished than their back-to-basics description suggests, but the songs are certainly melodically direct and vigorous in delivery with Anderson going to hell for leather in this goodnight, drummer Simon Gilbert flexing his muscles as efficiently as ever and guitarist Richard Oakes unleashes a succession of gothic post-punk riffs in the Bauhaus/Banshees stadium.

Debut single She Still Leads Me On is a catchy indie pop song with a decent dramatic chorus hook. The lyrics are inspired by Anderson’s late mother but this requiem is delivered with an aggressive spirit. Personality Disorder arrives over pounding drums and declamatory lyrics, before Anderson whispers “will you be my personality disorder?” It’s his midlife catharsis, still living dangerously to some extent pushing his voice in volume and pitch on the rockabilly route of The Boy on the Stage.

He gives himself a break on the smoother, expansive ballad Drive Myself Home and the roving It’s Always the Quiet Ones, but ramps up the melodrama on What Am I Without You. The zeitgeist has long moved on, but Suede continues to justify its revival with such powerful fare.

Ozzy Osbourne feels its age for about 50 years but the rock does not stop on its umpteenth album. Patient Number 9 rock’n’roll madness-themed riffs undermined theatrically by Alice Cooper but tackled more plaintively by Osbourne, whose expression of disorientation and choking on Nothing Feels Right has a more confessional tone and whose Darkside Blues has a haunted tone.

Osbourne teams up with a different metal guitarist for each song – Pearl Jam’s Mike McCready rips eagerly on Immortal, Zakk Wylde brings the fuzz and earth-shaking on Parasite, in which Ozzy imagines his mother’s ghost taunting , his Black Sabbath brother Tony Iommi serves up his usual near-classic inflections and meaty riffola and Eric Clapton ruminates on One of These Days.

Central peasant LeAnn Rimes is also in a collaborative mood on his latest album, drawing his guests from the soul, blues, jazz and pop worlds. Ziggy Marley and Ben Harper are guests on The Only’s lame reggae pop while Sheila E rocks a controlled racket on The Wild, with a polyphonic, tribal incantation backing a strong, soaring vocal. Something Better’s Coming features more choral elevation, with bluegrass seasoning, while the title track God’s Work sits at the intersection of country, gospel and pop. Rimes is at its strongest, however, on the sumptuous piano ballad Spaceship.

Harry Christophers’ relationship with the Handel and Haydn Society of Boston produced a series of refreshing recordings, particularly of Haydn’s music. As a group of period instruments and a sizable choir, pairings like this most recent – ​​Symphony No. 103 “Drum Roll” and the Theresienmesse – are intriguing possibilities. Christophers opens with the symphony, the scepter-like presence of the solo timpani inspiring a reading that progresses with soulful purity and precision. There’s a tiny flatness to the opening intonation, but in light of the sparkle that fills the final Minuet and Finale, it may be conscious, anticipated deliberation. The main course is the mass, a spectacle that fully captures its nobility and spiritual fervor. The chorus offers suitably restrained splendor, complemented by the well-matched solo quartet of Mary Bevan (soprano), Catherine Wyn-Rogers (mezzo soprano), Jeremy Budd (tenor) and Sumner Thompson (baritone). A well run outing. Ken Walton

Sam Reider, accordionist with jazz-bluegrass fusioners Human Hands, makes his solo piano debut with a very different genre of jazz, celebrating the return to his native San Francisco and the happy rediscovery of his grandfather’s 1918 Steinway. Influenced by both classical and contemporary influences and with something of an old-fashioned piano recital, Reider’s playing is richly expressive, whether pensive or bursting with spontaneous life. Petrichor denotes “the fresh smell of earth after the first rain” and the title track is merrily mercurial, dancing around a busy left hand. In contrast, Mirror Lake is a limpid impressionist shimmer (and yes, Debussy comes to mind), a single note continually echoing under reserve chords. Emahoy takes on a majestic touch of Gershwin-esque blues; the blues, too, pervades Panoramic Highway, while the unapologetic Kansas sentimentality and Land’s End’s magnificent conclusion indeed seem to evoke a homecoming. Jim Gilchrist