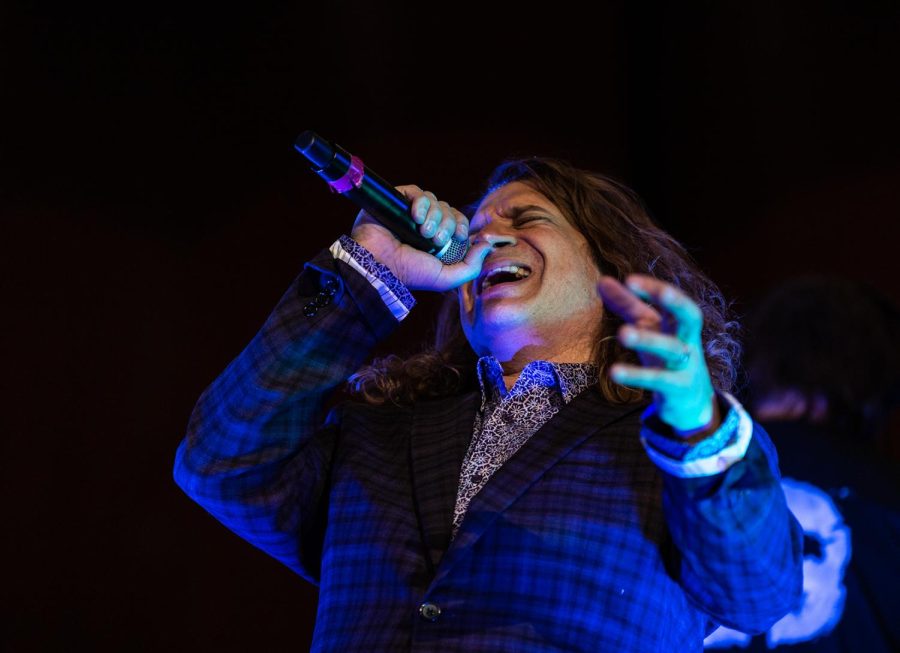 Kariotis is a crossover artist who has performed internationally with appearances at Avery Fisher Hall in New York, the Berlin Philharmonic Orchestra in Germany, and regional opera houses.

The evening featured 13 pieces which were mostly combinations of opera and rock music styles. The performance began with “Rondine Al Nido”, written by Kariotis and Vincenzo de Cresenco and was followed by “Lucky in Love”, written by Kariotis and his late brother Anthony Kariotis. Before performing, Kariotis introduced backing vocalists Ale, Zoe, and Kariotis’ wife Aimee on stage. “Lucky in Love” is a romantic feel-good song written in English and Italian.

The opera piece “Che Gelida Manina”, which translates to “your cold little hand”, followed and is based on Giacomo Puccini’s four-act opera “La Bohème”. It was specifically Rodolfo’s Act 1 aria that he sings to his lover Mimì after falling in love.

“Come Home Tonight” written by Kariotis and his brother was performed afterwards. Kariotis switched to the piano for this piece and before performing, said “it’s a song about a man who didn’t do it with his wife”. The piece begins softly, emphasizing mainly piano and drums.

Before going into hiatus, the symphony and Kariotis, along with backing vocalists Jaya, Abeni and Aimee, performed “Because of You” which was written by him and orchestrated by Christopher Reyman, Ph.D. They also performed ” Solo Amore” or “I’ll Stay”, which starts with pizzicato then changes to arco after a few minutes. “I’ll Stay” is a light piece that really emphasizes the symphony as well as Kariotis’ vast vocal range.

After a 15-minute intermission, the show resumed with “Pieta Signore,” which translates to “save this soul,” and is written by Kariotis and Alessandro Stradella. This heavy-hearted piece began by emphasizing the cello section, serving as a powerful accompaniment to Kariotis’ vocals. The middle of the piece shifts to a more jazzy sound and ends with strong operatic vocals.

After that was “Tell the World (I’m Comin’)” which Kariotis said he wrote when he was a little angry. The saxophones were the main accompaniment to this piece, adding an upbeat and lively sound.

“Vesti La Guibba”, which translates to “Hide the Tears”, came next, in which Kariotis took the guitar. It begins with a strong drumming intro and was overall a cheerful and jovial piece, alternating between Italian and English.

The last four tracks of the evening included “That’s enough for me”, for which Kariotis returned to the piano, and was more of a heartfelt track where even some audience members pulled out their phone flashlights and swung their arms out to accompany the song. They then closed with “Lennon in Heaven”, “Nessun Dorma” or “nobody sleeps” and “Without Love (You’re Nothin’)”.

Although the evening was largely composed, played and even included T-shirts being thrown at the audience, the highlight was “Lennon in Heaven” due to the message behind the song.

“About 27 years ago my best friend, my father figure, my brother and someone who meant the world to me who was also my first singing teacher passed away from Lou Gehrig’s disease,” Kariotis said. “One of the last conversations we had together was very important to me because I asked him, ‘Tony are you afraid to die?’ and he couldn’t speak. It took him a long time to tell me, but he told me he wasn’t afraid because when he got to heaven, not only would he be able to sing again and tell me watch, but he could also sing with John Lennon, and that’s what this song is about.

In an interview posted on his YouTube channel, Kariotis said of his late brother: “The day he died was the beginning or the birth of my transformation into a crossover artist. A lot of the songs on this album are songs that I imagine we would have written together.

For more information about the UTEP Music Department and its events, visit utep.edu/liberalarts/music/events/

Annabella Mireles is the photo editor and can be reached at [email protected] or @photographybyannabella on Instagram.