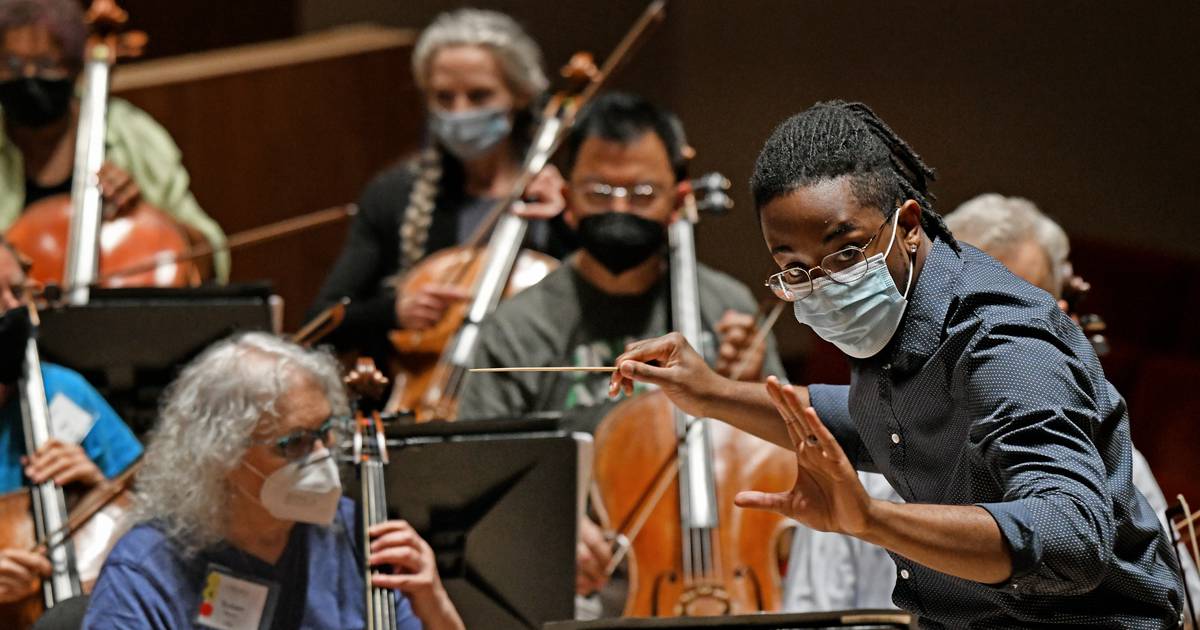 The performance will begin something like this: the “A” note of an oboe will ring out on the stage of the Joseph Meyerhoff Symphony Hall, signaling the combined energies of a 100-piece orchestra to come to life like a great jungle cat.

The violins, violas and cellos will be tuned to the A of the oboe, as will the English horns, trumpets and flutes. Then, suddenly, they will fall silent, gathering in a silent crouching position waiting for bandleader Jonathan Taylor Rush to raise his baton and let them go.

This year marks the first time since 2018 that the BSO Academy – essentially an adult fantasy camp for classical music nerds – organized its week-long series of workshops, classes, lectures and rehearsals, in which 76 amateur musicians perform alongside music professionals the Baltimore Symphony Orchestra. The program concludes this weekend with a pair of free public concerts, one Friday and one Saturday. On a recent visit to the Meyerhoff, every nook and cranny of the cavernous building (including the men’s locker room) seemed to contain a string quartet or violin trio working on a different piece of music.

For Christine Scott, 72, the academy was an opportunity to immerse herself, however briefly, in a craft that left little room for women or black musicians when she was growing up.

His dreams of a career as an oboist with a major symphony orchestra were nurtured at Fiorello H. LaGuardia High School of Music & Art and Performing Arts, the prestigious New York institution that inspired the 1980 film, “Fame.” She graduated in 1967 and was beginning to prepare for auditions when she was forced to face grim statistics.

“My teacher pointed out to me that I should look at all the professional orchestras and ask myself how many women played there,” Scott said. “He said I should also ask myself how many African Americans were playing there. He said if I wanted to try he would support me until the end, but that was the reality at the time.

Scott put down his oboe and didn’t pick it up for 45 years.

“Playing here is a moving experience for me,” said Scott, now a retired educator from Dobbs Ferry, New York. “Some people meditate. I play the oboe. When I started making my own reeds and playing again, I found a place I had lost long ago.

The BSO was not the first American orchestra to host such a “pro-am” event. Orchestras from Minnesota to New York to Virginia have had similar gigs and rehearsals on their rosters in recent years. But since its inception over ten years ago, the BSO Academy has offered what was arguably the most intensive and comprehensive experience, taking place over eight full days instead of the more typical one to five. (In addition to the academy, the BSO holds a one-night “Rusty Musicians” concert during the winter break which also includes a mix of amateurs and pros.)

Nor is the BSO Academy’s repertoire simplified for lay musicians, who tackle some of the most difficult works in the classical canon: parts of Dmitri Shostakovich’s “Symphony No. 9”; “Jupiter” from “The Planets” by Gustav Holst and “Scherzo Capriccioso” by Antonin Dvorak.

“We open up our sacred space and share what we do with airline pilots, computer programmers, immigration lawyers and rocket scientists who have such a passion for orchestral music that all these years over later they’re still playing their instruments,” said Jane Marvine, the BSO musician who conceived the academy in 2009 with the orchestra’s former musical director, Marin Alsop.

“Over the years, participants have told us that the academy has been a transformational experience for them,” Marvine said. “It validates something in their soul.”

Some pro-am orchestra programs in other cities limit their applicant pools to specific groups, such as college students. The BSO Academy accepts any adult who can read music and, as Marvine said, “can play well enough to stay away.” There are no auditions; musical parts (including solos) are assigned to participants in advance.

She is relieved that the academy is back after a three-year hiatus. The 2019 camp was canceled after a financial crisis caused musicians to be locked out of Meyerhoff Symphony Hall for three months. And the pandemic has halted all in-person events in the summers of 2020 and 2021.

The organizers did not know how many musicians would return this year. But the decline, if any, has been minimal. Residents from 19 states participated in the 2022 academy, although one musician from Hawaii had to cancel at the last minute due to health concerns.

“People come back to the academy year after year,” said Christine Murphy, assistant principal flautist at the BSO. “I’m really touched to see how much this means to them.”

Murphy, 28, is at the start of his career, and the academy allows him to get to know other members of his tribe.

She read the news articles documenting the shrinking size of symphony audiences, the grim prognoses that classical music is a life-supported art form.

But many academy participants subscribe to concert series in their hometown. They have a deep understanding of the difficulties of performing particular musical passages. They pick up on and respond to changes in a musician’s interpretation. By their very existence, academy attendees reassure Murphy that the art form she loves still has a future.

“Listening to stories about people’s love affairs with their instruments was an eye opener for me,” she said. “It’s really encouraging to know that there’s still so much passion for classical music here in Baltimore.”

The academy is not cheap. The chamber music program costs $650, while the orchestral program costs $1,700, and this does not include meals or hotel room. Some participants enroll in both programs. Marvine said reduced rates are available for music lovers who cannot afford full tuition.

For the 41 BSO musicians participating this year, the academy can be curiously liberating by allowing them to temporarily relinquish the perfectionism that has dominated their careers. They can afford to enjoy even an imperfect performance full of skipped notes and late entries, but which contains moments of beauty.

“During this week,” Marvine said, “we put our judgments aside.”

During a recent Shostakovich rehearsal, the orchestra was at full throttle. Bandleader Rush reached out an arm and raised his index finger. Gradually, the music began to fade. The dying sound was so haunting it sent shivers down a viewer’s spine.

Plan your weekend with our picks for the best events, restaurant and movie reviews, TV shows and more. Delivered every Thursday.

Christine Vermeulen, 58, arrived at the academy worried about not meeting the expectations of her teachers. Instead, she learned to disarm her inner tormentor. Vermeulen played the flute seriously in high school, but quit when she realized she wasn’t talented enough to play professionally.

It would be nearly four decades before the suburban Chicago woman picked up the instrument because she wanted to duet with her 22-year-old daughter, who is performing at the National Repertory Orchestra in Colorado this summer and is considering a career. professional.

Vermuelen thinks her daughter could get that extra bit of talent she lacks herself. This makes her a little jealous, she says, but above all, extremely proud. She said her week at the academy reminded her that the arts exist to serve people, not the other way around.

“I realized that I didn’t have to be perfect to play the flute,” she said. “I don’t have to be awesome. It’s just for me to learn, to experience being around wonderful people, like-minded and passionate about the same things as me.

“Being able to sit on stage with this orchestra was a life-changing moment.”

A play about Down syndrome hits the Opera