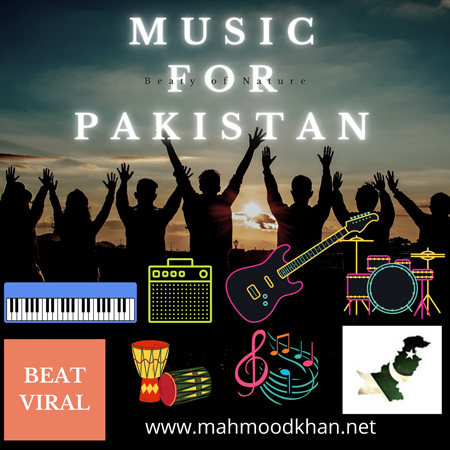 The recent economic struggles in Pakistan have dealt a devastating blow to the country.

A new fundraising and awareness initiative, Music for Pakistan, has been created to shine a light on Pakistan. The initiative is a call to arms for artists around the world to come together to shine a light on the country’s ongoing crisis, with the aim of raising much-needed funds to help address food shortages. Artists of all genres and from around the world are encouraged to register. Once registered, the initiative will provide information on how to submit live music videos, with accepted videos to be edited into a television program and broadcast on Livestream. All proceeds will go to a designated charity in Pakistan. The spearhead of this initiative is the famous Australian musical artist Mahmood Khan, born in Pakistan. The pioneering singer-songwriter, musician and filmmaker has been called one of the most notable world music artists of recent times. He is a musical companion whose work and creative achievements are celebrated in Australia, his hometown and around the world. From his formative years in Los Angeles as a production assistant, eventually taking on the role of head composer, producer and engineer within the agency, collaborating and writing for producers and artists such as Chucki Booker, Mary J Blige, Eazy E, NWA, Vanessa Williams, to catch the eye of internationally acclaimed Pakistani singer Nusrat Fateh Ali Khan, the famed Pakistani singer, musician, songwriter, and music executive, whom The New York Times has dubbed one of one of the greatest qawwali singers in history, Mahmood was a tireless supporter of social causes in Pakistan and Australia. Along with his many international chart successes, Mahmood has always been a strong advocate for maintaining cultural integrity, whether in Pakistan or Australia. Music for Pakistan is an extension of her ongoing dedication to the power of music and its ability to heal and bring about real change. Music for Pakistan is an initiative of Mahmood Khan with the support of Beat Viral music.

You can register for Music For Pakistan by going to https://mahmoodkhan.net/music-for-pakistan

Meanwhile, acclaimed Australian music artist Mahmood Khan has once again defied all odds and expectations and achieved sustained success in the world’s most lucrative music market, the United States.

The multi-talented Ballina-based musician cracked the top ten with his latest single Blue Snow, storming the US iTunes charts to #7, an incredible achievement for anyone, but quite an extraordinary feat for this creator. versatile that continues to rack up accolades and attract success on multiple fronts.

Of course, Khan is no stranger to major chart action, as his CV reveals, paving the way for a music career that includes his enduring recordings with Nusrat Fateh Ali Khan, reaching the top five of the USA iTunes charts. Jazz, and having no fewer than six songs in the iTunes USA top 100 as of April 2021, with his #1 Billboard Classical Crossover hit Mahmood Khan with Willoughby Symphony Orchestra. But the past two years have been even busier for Khan. In May 2021, his jazz-inspired album Imaginary Friend topped the US iTunes charts and the track Jahan Tu Nahin soared to No. 18 on the Billboard World Music charts.

Not only does his story reveal an astonishing breadth and depth of experience and accomplishment, but his entrepreneurial savvy also positions him as a highly inventive and resourceful singular artist with an observant and intuitive eye for the future of music production and accessibility. Khan has shown this with his spearheading work with Beat Viral’s Great Music Licensing Platform (GMLP), whose access to thousands of songs across many genres enables curated, brand-focused playlists. In a sense, the stunning success of Blue Snow can be attributed to Khan’s incredible ability to tap into an audience’s basic entertainment needs.

Blue Snow’s stripped-down contemporary folk-pop allure might reveal a well-crafted song performed with an approachable and highly palatable assortment of sounds and textures, a wonderfully competent set of performances in its own right, but ultimately it’s the driving force. emotional track, its powerful subversion of universal appeal that hits home. It’s no wonder, then, that Blue Snow has already made its mark so soon after its release. Aside from the musical set-up of the track, the prominent addition of the bass guitar, the subtle rhythmic impulses, and the tasteful nature inherent in the guitar parts, the most important takeaway from the song is its spiritual sensibility, this quality is evident and also finely intertwined with the fabric of performance, feeling and lyrics.

With lines such as “It’s going to happen, it’s only a matter of time / It’s our want and our need / Nothing can change our minds”, placed in a frame so gently evocative that it’s easy to see how his transference can escalate, yet inherently alluring, Khan can refer to a number of life-changing events here, but the listener nonetheless receives a generalized sense of acceptance, resolution, or even kindness.

Ultimately, Blue Snow is a manifestation of hope, and hope, especially when nestled within a three-minute slice of folk-pop sweetness, is irresistibly infectious. So the success of Blue Snow, like Khan’s GMLP venture, reveals an artist whose varied abilities intersect, but with their original impulse drawn from the desire to express the inexpressible, with the result: another hit song and music business model with heart.

Pakistani-born Australian singer-songwriter, musician and filmmaker Mahmood Khan has been called one of the most notable world music artists of recent times. He is a musical companion whose work and creative achievements are celebrated in Australia, his hometown and around the world.

Australia granted her citizenship in recognition of her contribution to the music industry when her song ‘Like the river’, recorded live at the Sydney Opera House, reached number one on the Aria pop charts.

Mahmood Khan started out in the music industry working as a sound engineer/producer at Jam Power, a black music production company in Los Angeles for over 15 years before embarking on the development of his career as a singer-songwriter.

In 2007 he came to Australia to study at Sydney Film School and ended up recording a live album at the Sydney Opera House.

The “Like the River Live at Sydney Opera House” video represented a milestone in Mahmood Khan’s incredible musical journey.

He became the first artist from the subcontinent to record a live album in the Sydney Opera House concert hall.

This song went on to make Australian music history when Mahmood became the first Asian artist to reach number one on the Aria Pop charts.

A behind-the-scenes documentary “Journey of a new sound” is available on YouTube.

In 2004, Mahmood launched this oriental group which took many years to develop.

Pakistani-born Australian singer-songwriter, musician and filmmaker Mahmood Khan has been called today’s most important world music artist. Mahmood’s avant-garde and genre-blending musical career, which includes his enduring recordings with Nusrat Fateh Ali Khan and his first solo album selling more than 6 million records, includes creating music history in Australia when he became the first Asian artist to score a number one on the ARIA pop charts with his international hit Like the River. Mahmood’s background as a seasoned producer is also evident on his latest release, Imaginary Friend, an EP of jazz-inspired songs with immense depth and melodic strength. Once again, Mahmood’s latest work is Mahmood at his best. The atmosphere is natural. The tone is calm; an effortless march uses lush production to connect with the vast multitude of its listeners. Highlighting Mahmood’s production sensibilities and magical storytelling, Imaginary Friend is sure to repeat the unprecedented accomplishments of his record-breaking career history. Imaginary Friend has already peaked at #5 on the iTunes Jazz charts in the US and is currently #1, a feat no other Australian or Pakistani artist has ever accomplished. The new release follows Mahmood’s recent staggering worldwide impact, which includes: 6 songs in the iTunes USA top 100 in April 2021.

After moving to Los Angeles, USA in the late 1980s, Khan was employed as a second engineer at Jam Power, a music production house. He was employed there for 12 years, before being promoted to chief sound engineer and music producer. During this period, Khan undertook the Seth Riggz Voice Training Program to develop his voice.