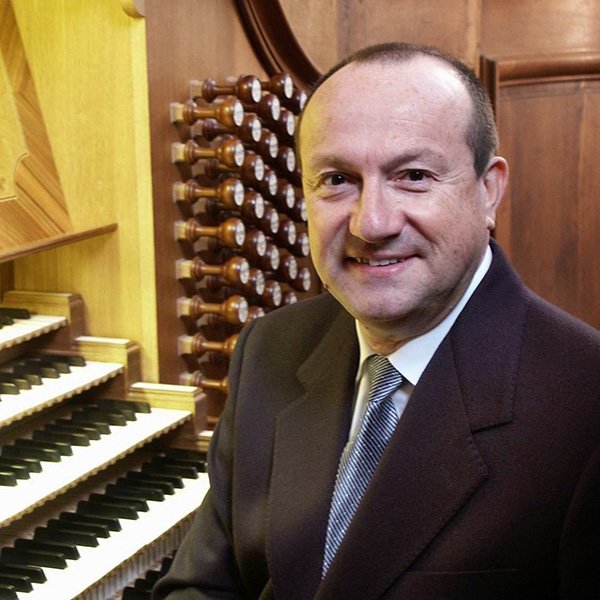 During the splendid organ recital last Sunday, one could imagine the Cathedral of the Holy Cross in Boston transformed into a French cathedral. Maurice Clerc, emeritus titular organist of Saint-Bénigne Cathedral in Dijon, France, and Knight of the Legion of Honor, has served works from previous generations of fellow French cathedral organists. His countrymen have a very distinguished tradition of brilliant improvisation, and naturally I had hoped that he would also provide one of his own. Its inclusion of improvisations written by Louis Vierne and Charles Tournemire, transcribed by Maurice Duruflé, who had studied with both men, more than sufficed. In addition, he ended the program with an improvisation by his own teacher Pierre Cochereau. While all of the composers included are known to organ audiences, the must-haves combine well with the rarities, offering a variety of dishes and skillfully using the many resources of the magnificent 1875 E. & GG Hook organ to its advantage.

As we observe the bicentenary of Cesar Franck’s birth this year, Clerc appropriately began with Franck’s Chorale No. 3 in A Minor, which Franck completed a few weeks before his death in 1890. As the approach from the artist to the tempos was idiosyncratic, the pathos of the work constantly imposed itself. The passage in the Quasi allegro sections was comfortably within the traditional tempo range, but the main theme, first stated in half note chords, was played in almost half time, i.e. quarter notes, which which rather undermined the world’s tired, plaintive mood which should contrast with the earlier turbulent passages. Clerc partially compensated with the frequent use of expressive boxes and expressive rubato, but “reinterpreting” Franck’s emotionally direct music by deviating from the printed score is not advisable, in my opinion. The central Adagio, however, was suitably relaxed, featured a sympathetic rubato, and employed the beautiful sounds of the Cornopian solo and accompanying flute, although when the half-note chords of the first theme reappeared in major, it again felt somewhat press. The growing excitement that led to the renewed commotion of the final section stirred blood, however, and the final chords sounded perfectly triumphant.

After the great emotional journey of the Franck choir, the reconstructed Louis Vierne improvisation, Meditation, brought balm to the interpreter’s melodious playing as well as to the strikingly beautiful sonorities he selected: rich ground-based playing that evoked those of the beloved Cavaillé-Coll de Vierne at Notre Dame de Paris. The coda used Clarabella (the American equivalent of the Harmonic Flute) gently sparkling hovering above the soft cushion of the Swell’s celestial string.

Charles-Marie Widor’s Memento de Bach is a rarity in recital programs: a set of six transcriptions or paraphrases of Bach movements of various genres, both choral and instrumental. Clerc chose the final chorus of the Passion according to Saint Matthew, which also completes Widor’s suite. Despite its double-choir format, Bach’s chorus is intimate and mournful (the text includes “We sit in tears” and “Rest sweetly, rest sweetly”). In the absence of text, however, Widor chooses to storm the skies with full organ (fff) outer sections and a middle section oscillating between mezzo forte and pianissimo, a romanticized outpouring of grief whose effect was admittedly cathartic. The pedal part particularly impressed, spanning virtually the entire foot manual, as the artist “took it in stride”. The final phrase of the work is entirely Widor’s invention to provide resolution to the major not found in the original; indeed, the chords have distinct echoes of Widor’s Third Organ Symphony. Yet the relief of the final Picardy third chord after grating dissonances had undeniable power.

Although Charles Tournemire’s magnum opus is the 51 suites of The mystical organ, one for each office of the liturgical year, his most enduring organ works are the Five Improvisations, and mainly the one on Victimae paschali Lauds. Some experts have argued that Maurice Duruflé, working from the primitive 78 rpm recordings that Tournemire made around 1930, inevitably invented almost as much as he transcribed; Either way, they are fascinating music, as evidenced by their continued popularity. Duruflé, a former student of Tournemire, said that these improvisations better represented his teacher’s volatile temper than The mystical organ which he memorably describes as having the effect of “elaborate music at a desk”. Vierne and Tournemire were among the first organists to record improvisations, and their styles were very contrasting. While Vierne’s approach was grounded in structure and form as in his compositions, Tournemire placed more emphasis on spontaneity and followed his inspiration wherever it led. Clerc’s mercurial and virtuoso interpretation of the work evoked the freedom and varied moods of Tournemire’s recording. He attempted no literal “recreation” of the original, but his flexible pacing and use of many colors remained very true to his spirit. He created a moving contrast between the ferocious majesty of the opening section, the soft and poignant passage on the Vox Humana 8′ and the growing frenzy of the final section. One also had to admire the sheer athleticism demonstrated by the performer in this demanding music.

Jean Langlais (1907-1991) is the third composer of this program who presides over the Cavaillé-Coll of the Sainte-Clotilde Basilica in Paris, following Franck and Tournemire. Langlais’ Prelude to Suite Médiévale seems to bring the medieval organum into a modern harmonic context alongside the composer’s new ways of using Cavaillé-Coll’s essentially romantic sound colors. In a significant change of mood, Clerc then offered Langlais The Nativity, a tender portrait of the birth of Jesus, beginning with an undulating figure in the low register and a clarinet in the tenor range. Unlike the often astringent harmonies of the earlier work, Langlais here employed a more consonant and almost romantic harmonic language, and the performer created a warm and radiant atmosphere. In the last pages, recalling the improvisation of Vierne, he marries magnificently the beautiful harmonic flute with the silky celestial cord. Langlais’ set concluded with one of his “greatest hits”, the thanksgiving hymn “Te Deum”. Inspired by the plainsong of the Te Deum, this fervent hymn of praise, although an early work of 1934, is perhaps the most “distinctly English” of the set. The song is heard in octaves over muted reeds before being interrupted by crisp fortissimo chords. Clerc’s performance was blessed with clear textures, dramatic dynamic contrasts, freedom of improvisation and exemplary recordings that gave the music grandeur and exciting power but never sacrificed clarity.

As Clerc had studied improvisation with Pierre Cochereau (1924-1984), former conductor organist of Notre Dame de Paris, it is not surprising that it was he who transcribed the final work, a scherzo originally improvised by Cochereau at Notre Dame in 1974, by which time recording improvisations had become almost routine. Like those of his teacher Marcel Dupré, Cochereau’s improvisations favor large forms as if to demonstrate that no standard musical format (fugue, sonata-allegro, variations, etc.) is forbidden to a talented improviser. It is therefore a delight that this scherzo largely leaves intellectual rigor aside in favor of amusement: the literal meaning of “scherzo”, after all, is a joke. Cochereau leads a joyous dance of frenzied triplets with fresh harmonies and delicious changes of sound colors. Clerc delivered it with elan, humor and great continuous energy. Towards the end, the dynamics diminished to mezzo piano and the harmony became cheeky with a cuckoo-like melodic figure – only for the full organ to come crashing down for the last three chords. The delighted public demanded an encore. By contrast, Clerc gave us JS Bach Erbarm dich, O Herre Gott (Have Mercy, Lord God), set to homophonic music with the soprano chorale, accompanied by continuous quaver chords. He gave a blunt, simple, straight-forward account – perhaps in penance for the irreverent fling that followed? Boston too rarely hears organists of international caliber from other continents. I hope that Mr. Clerc — and others — will come back.

Geoffrey Wieting holds a BA in Organ and Latin from Oberlin College and an MA in Collaborative Piano from the New England Conservatory. He is the organist of the First Parish Church of Weston as well as a freelance organist, collaborating pianist and vocal coach. He sings with the Back Bay Chorale and sits on the board of the Old West Organ Society.

The lyrical opera ensemble performs for the students of the St. Nicholas School in the Ukrainian village

A busy November program from ROHM