Classical music fans know French composer Georges Bizet for his beloved Carmen. Less known is his youth pearl divers, which the Dallas Opera performed at the Winspear Opera House on Saturday in its final production of the season. At least on opening night, the performance never came together in a compelling package.

Bizet’s librettists offered him a plot that was both clichéd and far-fetched.

The story revolves around a love triangle. Two friends, Nadir and Zurga, reminisce about a mysterious woman who has captured their affection. The woman, a priestess named Leïla, then appears in their village. Nadir sneaks into the temple for a secret meeting. Once captured, Zurga, the village chief, sentences them to death, but releases them at the last second. The opera ends ambiguously with Zurga alone on stage.

The opera is set in Ceylon, now called Sri Lanka, but the Dallas Opera claims to update the action to a fictional land to avoid racial insensitivities. For the same reason, set designer and costume designer Zandra Rhodes omits site-specific outfits in favor of bright costumes vaguely evoking Southeast Asia.

Cartoonish palm trees and an ocean backdrop hint at a tropical location in the first act, but there’s no sign that anyone actually lives here – odd considering it’s supposed to take place in a village. The setting of the first part of the third act is unclear. Does this take place in Zurga’s office? Or are the singers on a beach strewn with debris? And what about the expressionist backdrop full of sharp lines? Trying not to upset the audience, the production finds a middle ground between abstraction and reality, ultimately missing the mark.

Bizet’s score is heavily influenced by Gounod, and much of the orchestral writing follows predictable formulas. But the work shows signs of Bizet’s voice maturing into orchestral colors, including the silvery sounds of harp and flutes, and his gift for lyrical melodies.

Among the lead roles, tenor René Barbera stood out for his subtle approach to the role of Nadir. He had a keen sense of musical line, constructing sentences with eloquence, mustering his resources to stir highs and reveal the tender side of his voice when needed. As a Nourabad priest, Morris Robinson brought beautiful and powerful bass, imposing his will on others.

Like Leïla, Joyce El-Khoury’s soprano is of variable quality. His voice flourishes in its upper register, ripping swollen high notes out of thin air. But his chest voice sounded underpowered at times, and the transitions between registers weren’t always clean. Alfredo Daza as Zurga wielded a burly baritone, but with little elegance, singing mostly between forte and triple forte.

Co-directors Shawna Lucey and James Smith had some fiery moments from the cast, but much of the performance lacked energy. The chemistry between Barbera and El-Khoury was as cold as the Arctic. In a choreography by Eboni Adams, four dancers moved with grace and confidence, but proved distracting, especially during the famous duet “At the bottom of the holy temple”.

Nicole Payment, principal guest conductor of the Dallas Opera, coordinated the singers and the orchestra with large and lucid gestures. It drew vigorous orchestral playing one moment, moving into hushed intimacies the next. Faster sections, however, could have been more exciting at faster tempos.

Prepared by Alexander Rom, the choir hesitated at first, but then provided solid contributions. Lee Fiskness’ lighting effectively mirrored the development of the drama. But the sidelights cast distracting shadows across the stage, making the singers look grotesque and exposing offstage movements. 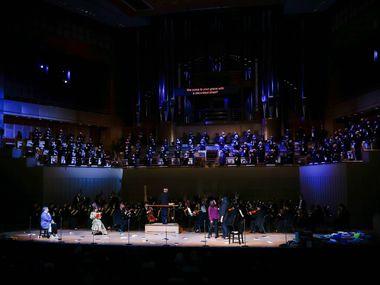 4 quick loans that can help you pay the bills