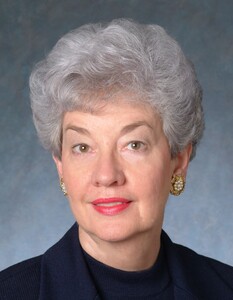 Dr. Anne Hodges Morgan, nationally acclaimed historian, author and expert on the formation and operation of family foundations, trusts and non-profit organizations, died Tuesday, June 14, 2022 at her Normandy home after a long illness. She was 82 years old.

She was born March 1, 1940 to Jeddie and Velvon Hodges in Houston, Texas, spending her teenage years in Dallas. In 1962, the year she graduated from North Texas University, she won the international NBC talk show competition, the experience she credits with changing her life. Impressed by her outstanding performance, one of the debate television producers arranged a scholarship for her to pursue her master’s degree at Columbia University in New York.

After graduating, Anne went to Washington D.C., intending to become a diplomat, but her first job was managing congressional liaison at the Library of Congress while simultaneously working as a translator for the United Nations. This experience as a congressional researcher led him to become a legislative aide to US Senator John G. Tower of Texas.

In the late 1960s, she left Washington for the University of Texas at Austin where she earned her doctorate in American history in 1971, the year she married a popular young UT history professor, H. Wayne Morgan. The following year, Wayne began his 27-year career at the University of Oklahoma’s history department, the last six as president, Anne quickly became vice president of project development for the Kerr Foundation at Oklahoma City. His doctoral dissertation was a biography of US Senator from Oklahoma, Robert S. Kerr.

The Morgans enjoyed co-authoring and editing many books, mostly about Oklahoma and the Southwest; they traveled, interviewed and researched together; amassed a fine private art collection. They also supported all of OU’s other fine arts, including their close friend, Marilyn Horne, and her master class for opera singers. Their love of entertainment has made their home a center of good food and lively conversation.

From 1978 to 1980, Anne served as grant writer and project coordinator for Oklahoma Image, which won the largest library grant in history from the National Endowment for the Humanities. She and Wayne traveled throughout the state to study the ethnic makeup and diverse heritage of the groups that make up Oklahoma’s population, particularly blacks, Native Americans, and European immigrants. Enlisting 10 other historians as co-authors and Wayne as editor, the project produced a 10-volume series, “Newcomers to a New Land.” With so much research remaining, Anne followed with “Oklahoma Memories” and later a history of domestic politics in the Kennedy administration, “Kennedy and Congress.”

Anne had the unique ability, coupled with a quick, irreverent wit and a lively sense of humor, to bring the right people together to implement programs to benefit the population at large, such as the Harn Homestead in Oklahoma City. , and any philanthropic project that would improve the state library system.

She was predeceased by her husband of 42 years, Dr. H. Wayne Morgan; his parents, Jeddie and Velvon Hodges; his sister, Sandra Hodges Gamal, and his brother-in-law, Dr. Saad Gamal. Survivors include two nephews, Sherif Gamal of Arlington, Virginia, and Hazem Gamal and his wife, Elizabeth, of West Orange, New Jersey. The family would like to thank Kelly Copeland for her many years of friendship and devoted care for Anne.

The family has designated the Anne Hodges and H. Wayne Morgan Scholarship Fund at the University of Oklahoma Foundation, 100 Timberdell Road, Norman, OK 73072 as appropriate for Anne’s memorabilia.

Arrangements for Anne have been entrusted to Havenbrook Funeral Home in Norman. Online condolences can be shared at www.havenbrookfuneralhome.com.