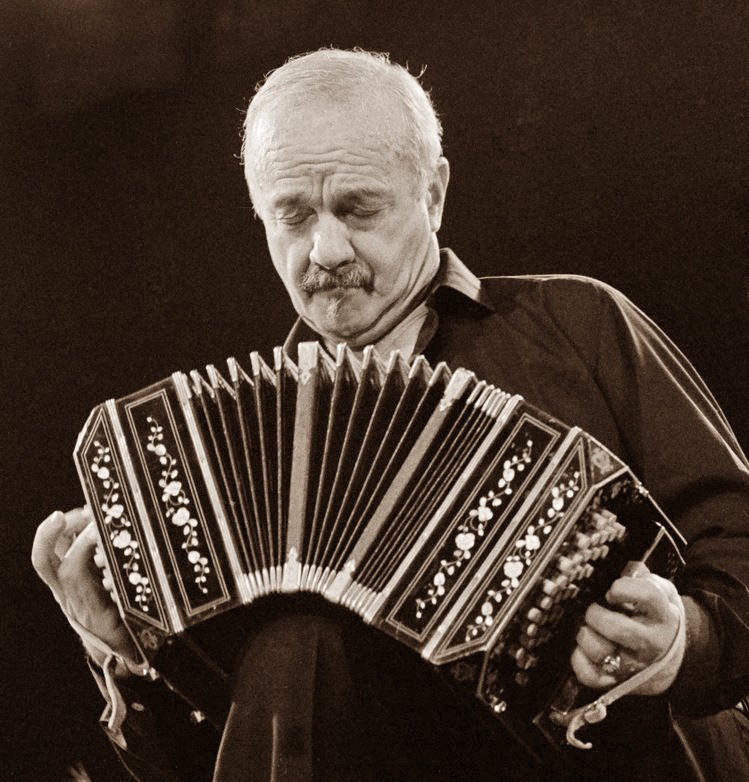 Accomplished pianist and admired NEC educator Tatyana Dudochkin established the annual Composer Celebration Concert in 1991, each year featuring the work and life of a major composer. This weekend on the 30and finally took place at Jordan Hall after a two-year pandemic hiatus. The dazzling programme, presented by Dudochkin and long-time BSO commentator and CRB host Ron Della Chiesa, celebrated the centenary of the birth of Astor Pantaléon Piazzolla, wowing a discerning crowd.

The event showcased Piazzolla’s inventiveness with works spanning his musical life in varying moods and modes, revealing a singer-songwriter who straddled both the old and new worlds. Drawing on his international experience – born in Argentina, brought to New York as a child, returned to Argentina as a teenager, studied in Paris, lived for years in Italy – Piazzolla created new tango, a complex genre with jazz, dissonant harmonies and baroque and classical techniques. An accomplished bandoneon player, he performed from the start of adolescence. Prone to depression, he suffered deeply but was able to create memorable music. This long-awaited occasion succeeded in covering the breadth and depth of Piazzolla, the man and the artist. The audience cheered and enough bouquets to supply a florist for a day or two.

Dudochkin, who emigrated in 1986 from Ukraine, dedicated the event to all that is endured in the ongoing war there, opening the afternoon with the Ukrainian national anthem, the audience standing in a empathic care. Then the concert began with a duo-piano version of Libertangoa title mixing “libertad” and “tango” played by Dudochkin and Victor Cayres with a brilliance intrinsic to this combination of tango and jazz.

The Death of the Angel, an Allegro Vivace, part of the “new tango” movement, largely created by Piazzolla in the 1950s, was popularized in a recording of the same name in 1973 and describes the power of an angel to heal the restless souls of young people who died in a neighborhood knife fight. Many subsequent instrumental combinations told this musical story with its edgy bravado and mourning; here, haunting guitarist Zaira Meneses brings clean lines and beauty to an arrangement by Baltazar Benitez.

Dudochkin alone offered Gulinay, a musical microcosm of a life beyond hope, which has also been adapted for many instruments, and in this case piano, arranged by Phillip Keveren. It feels like a song without words, with obvious regret, a reminder of happy, colorful times in the midsection, and the nostalgia and sadness that followed. Taking Dudochkin effectively communicated the intertwined moods of Gulinay.

The signature and the tremor of the soul Goodbye Nonino, an elegy to the composer’s father, who died while Piazzolla was on tour, conveys a sonic version of the stages of grief – denial, anger, bargaining, depression and acceptance – with penetrating and persistent sound. Piazzolla considered the melodies it contained his best. Classically trained jazz pianist Eyran Katsenelenbogen, bandoneon master Julien Labro and the Boston-based Balourdet String Quartet (violinists Angela Bae, Justin DeFilippis, violist Benjamin Zannoni and cellist Russell Houston) brought in many spectators on the verge of tears.

A stunning version of Big Tango (dedicated to Mstislav Rostropovich) found Sam Ou’s cello and Dudochkin’s piano in dialogue. The three sections of this one-movement composition gave the musicians the opportunities they seemed to relish, and they brilliantly conveyed the accented tango rhythms of the opening section before launching into the libero and cantabile middle with lyrical phrasing, and the last giocoso to its bravura conclusion. Or charmed by his electrifying mastery of the challenges of double-stop and glissando.

Oversight (I forget) from 1982, composed for the Italian film Enrico IV, contains an unforgettable memory. The voice of soprano Yelena Dudochkin embodied, even haunted the piece, complemented by Labro’s bandoneon and the Baloudet string quartet, with Oleg Oseonkov on bass and Maxim Lubarsky on piano.

Not really scary, “Afraid” of Five tango sensations, rather appeared as an urgent and haunting fugitive, in the hands of Lambro’s bandoneon and the Baloudet Quartet.

The closing of the centenary celebration brought together the Piazzolla String Orchestra, an ensemble of ten (5 violins, 2 violas, 2 cellos and a bass viol), plus the coordinator and soloist Maria Ioudenitch, violin with a fiery interpretation of the Four Seasons of Buenos Aires, a collection of four individual compositions by Piazzolla written between 1965 and 1970 for piano, electric guitar and contrabass bandoneon. After Piazzolla’s death, Leonid Desyatrukov arranged them for violinist Gidon Kremer and string orchestra, creating a coherence that includes nods to Vivaldi, but respects Argentina’s southern hemisphere location. , where winter is summer, and summer is winter. It doesn’t matter where it comes from! Yudenich’s momentum made the crowd applaud and quiver between movements.

Despite this year’s success, Tatyana Dudochkin told me she doesn’t know if her series will continue, due to funding needs and changing times. But the energy, quality, and joy of this year’s event should make it clear to music lovers across Greater Boston that these composer-celebratory concerts should — must — continue. There’s a ready audience, plenty of musicians ready to perform (including talented youngsters from NEC’s preparatory program), and Boston can only benefit from imaginative arts events like this. Well done, Tatyana!

Julie Ingelfinger, a pianist who studied at the Hartt School of Music, the Aspen Music Festival and School and Harvard, enjoys her day jobs as a professor of pediatrics at Harvard Medical School, pediatric nephrologist at Mass General Hospital for Children and associate editor at the New England Journal of Medicine.

4 quick loans that can help you pay the bills