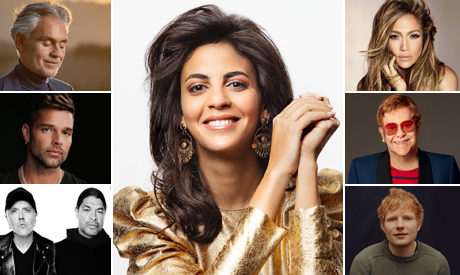 Global Citizen Live is a 24 hour event that features concerts and socializing with renowned personalities on numerous stages across the globe. The event takes place and is broadcast simultaneously from Lagos, London, Los Angeles, New York, Paris, Rio de Janeiro, Seoul, Sydney and other major metropolises.

Besides Egyptian soprano Fatma Said, the next edition of the event will also feature artists such as Elton John, Ricky Martin, One Republic, Metallica, Lizzo, Lorde, Zara Khan, Duran Duran, Demi Levato, Jennifer Lopez, Kylie Minogue, Keith Urban, along with dozens of other names of musicians of all generations and representing a variety of musical genres.

The event is part of Global Citizen’s 2021 Global Campaign, a stimulus package for the world that focuses on five key goals this year: end COVID-19 for all, end the hunger crisis, resume education for all, protect the planet and advance equity for all.

The campaign works on many levels, as it ensures that the proceeds of the tickets are donated to many causes reaching out to communities in need, and it engages world leaders in the event, which highlights the crises in which are confront millions of people and call on citizens of the world to act to spark change and make an impact in the world’s most disadvantaged communities.

Fatma Said is the first Egyptian musician to participate in a global event of this magnitude, rubbing shoulders with the biggest names on the world art scene.

The soprano is one of the brightest Egyptian stars in classical music, with a portfolio that includes significant accomplishments.

Fatma Said was the first Egyptian singer to be accepted into the Academy of La Scala in Milan and then performed there in Mozart’s Magic Flute.

Said was also one of six musicians selected by BBC Radio 3 to participate in its Next Generation Artist Program from 2016 to 2018.

In April, BBC Music Magazine named Fatma Said ‘Newcomer of the Year’ for its 16th annual awards. She also won the Vocal Award for her debut album “Al-Nour”, which was released by Warner Classics and starred pianist Malcolm Martineau.

How the cast members of “Dear Evan Hansen” found their voices