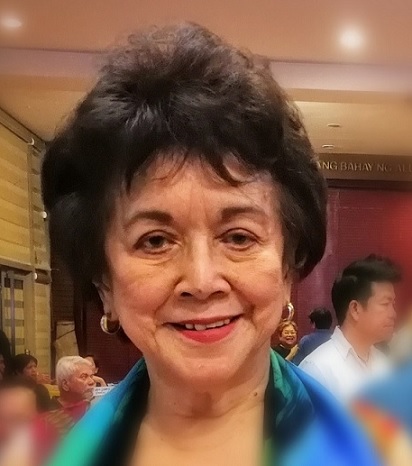 Fides Cuyugan-Asensio, 90, is the new national artist for music

Photos from the official FB page of Fides Cuyugan Asensio

For the record, Asensio is the first Filipino voice scholar to be accepted into the Curtis Institute of Philadelphia, the same school identified with pianists Cecile Licad and Nena Villanueva del Rosario and tenors Otoniel Gonzaga and Noel Velasco, among others.

At the time, in the 1950s, Curtis was the most exclusive school in the world.

“The best teachers of every instrument and voice have taught Curtis. There were only 120 students housed in a huge upscale Philadelphia Mainline mansion. No recorded audition was acceptable. Aspiring voice and instrument specialists (piano-violin, etc.) had to audition in person. If you come from a country as far away as Nena del Rosario and me, too bad if you fail the audition. You had to spend your ticket to get to Philadelphia, Pennsylvania,” Asensio said.

A famous friend and classmate of Asensio at Curtis was none other than the famous Italian-American diva, Anna Moffo, who died in 2006.

Asensio recalled: “Anna Moffo was a very dear friend and we shared a lot of good memories. Due to financial constraints, she brought a home-cooked lunch to school where we ate together in Curtis’ basement. She barely ate out, unlike my wealthier classmates. In these intimate lunches (read: over baon box), there were many confidences exchanged mainly from Anna. She was madaldal speaking with a distinct Philadelphia accent. We talked about family and friends. When a piano scholar-boyfriend at Curtis for a very wealthy heiress from a famous clan dumped Anna, Anna was sadly silent. She spoke about it in a low voice interspersed with tears. We had one hell of an opera session. Her personal life – after breaking into the professional worlds of opera, film and television – was not what she envisioned with her school boyfriend, a big and very handsome piano major in Curtis. Anna married successively to wealthy older men who left her as an operatic heroine when they died with substantial finances but very little of the starry-eyed passion I had seen in those years at Curtis .

Asensio was born in Lucena but her physician father, Dr. Gervasio Santos Cuyugan – President Quezon’s personal physician-surgeon – was from San Fernando, Pampanga. She got her Bicol connections from her mother – Jacinta Belza – who was a beauty from Buhi, Camarines Sur.

She was born into a music-loving family. His mother always played the piano of the simplified extracts or the piano of the grand opera. “I guess that’s where I first had an aural insight into the exciting world of opera. My sister, Ceres was the star pupil of Maestra Marcela Agoncillo. My brother, Ruben, was the star pupil of Maestro Ernesto Vallejo (the country’s first violin prodigy).

In some past tributes, contemporary operas she wrote have been staged.

Among them were Larawan in Kababaihan: Mukha in Maskara (music by Lucrecia Kasilag; Mayo-Bisperas ng Liwanag (inspired by Mayday Eve by Nick Joaquin); Music by Rey Paguio; Spoliarium – an opera on the life of Juan Luna Music by Ryan Cayabyab; Why Flowers Bloom in May (also by Kasilag;) Song of Joseph – a musical about the life, love and death of Saint Joseph (music by Raymond Roldan) and La Loba Negra composed by Francisco Feliciano and staged at CCP in the mid 80’s with her singing one of the lead roles in the distinguished company of Noel Velasco and Eleanor Calbes.

As it stands, the title is long overdue.

As a performance artist, she was coloratura to reckon with in the 1950s and 60s. She made her professional debut as Adele in Die Fledermaus at the Far Eastern University Auditorium. Two years later, she sang the role of Sisa in the world premiere of De Leon’s Noli Me Tangere with the Manila Symphony Orchestra.

Until the late 1960s, Asensio appeared in many Philippine operas, including the world premieres of Mapulang Bituin by Santos, Binhi ng Kalayaan by Pajaros, and Dularawan by Kasilag. His repertoire also included operatic roles such as Gretel in Hansel und Gretel, Lucia in Lucia di Lammermoor, Susanna in Il Segreto di Susanna and Konstanze in Die Entfrung aus dem Serail.

She also remembers Die Fledermaus simply because she considers it a fun opera. “It didn’t cause me any vocal difficulties at my age. In addition, I had excellent co-singers, director, conductor and choreographer. It was the Austrians Herbert Zipper and Trudl Dubsky Zipper who put together an authentically correct staging.

Her other children – her graduates and students who choose to identify with her – carry the line of her unbroken passion for music and theater into the distant future.

We remember what she said in a last interview: “This opera editing and marketing business that La Asensio maintains has been exaggerated by misconceptions, one of which is that it is entertainment for the elite. I want to challenge that and have a real debate about what opera is. I also want to demystify it. Operas are mostly stories that even neighborhood kids can relate to. Murders, murders, love affairs, incest, etc. may in fact be the tabloid headlines read by the masses. It’s just a matter of how to present it in the language that Filipinos understand and market it like they do on foreign shows.

The Order of the National Artist, established by proclamation no. 1001 signed in 1972, is the highest national recognition conferred on Filipinos who have made distinct contributions to the development of Filipino arts and culture.

MoneyMutual Review: Is Money Mutual Legit For Those With Bad Credit?