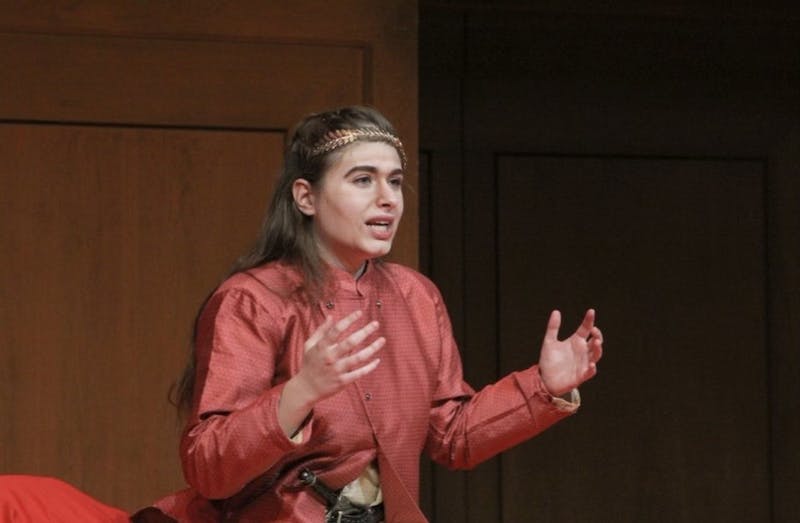 Four UNC singing students have been invited to compete in the semifinals of their categories of the National Association of Teachers of Singing competition, which will be held in July in Chicago.

Isabelle Kosempa, Julia Holoman, Mackenzie Smith and Kennedy Miller have been chosen to attend the national NATS, a series of competitions and performances by talented singers, performers and songwriters.

This year’s event is the first national in-person NATS conference since 2018. As the conference is biennial, the last one was held virtually in 2020 due to the pandemic.

The semi-finalists, along with everyone involved with NATS, have felt the impact of COVID-19 over the past few years. However, the four students also cited examples of how quarantine in the early months of the pandemic allowed them to devote more time to their craft.

Kosempa, a young music major and one of this year’s NATS semi-finalists, will compete in the Lower College Classical Treble category of the competition.

She said she’s been competing in NATS since she was in high school.

Kosempa has been professionally trained since the age of 10 and credits much of her musical success and inspiration to her grandmother.

She added that although COVID-19 has been difficult for artistic communities, she has continued her involvement.

“It was people in my life like my grandmother who was a musician for 40 years that really pushed me to keep going and to keep trying,” Kosempa said.

Miller also graduated from the University in May, with a degree in music and English. Miller will compete in the Upper College Classical Treble category of competition.

Coming to college, Miller originally thought she would go to law school, but quickly realized she wanted to pursue a career in music.

“I can’t imagine doing anything else and I don’t think it makes sense for me to do anything else, so I kept my same two majors but really poured a lot more into music,” said Miller.

Miller attended NATS as a freshman and traveled to Baltimore. There, she received first place in the Mid-Atlantic Regional competition.

She said COVID-19 grounded her in her craft and made her realize that she wasn’t just performing for the applause. She said she did it because she liked the technique.

“I’m really excited to go out there and be able to sing,” Miller said. “This will be my first in-person competition since February 2020, so it will be great to do live music again in a competition setting.”

Holoman, a rising senior in college, is a music major and was invited to compete alongside Miller in the Upper College Classical Treble category.

She said that during her freshman year of high school, she started competing in the NATS and also reached the national level that year.

Holoman noted that when COVID-19 started in March 2020, quarantine left him with more free time. Before COVID-19, she wanted to watch as many operas as possible, but she had pushed back. When she, like the rest of the world, was at home, she subscribed to Metropolitan Opera Live in HD and was finally able to watch them.

“It was a really big thing for me — to be inspired and just hear really well-trained voices — and use that to inspire me to practice so I could improve,” Holoman said.

Holoman said consuming these operas allowed her to learn about what the classical repertoire had to offer and to see different art forms she had never seen before as she aims to sing the operate professionally in the future.

“I’m really excited about going to Chicago and excited to be back at the national level because there hasn’t been an in-person conference in so long,” Holoman said.

Unfortunately, due to an eight-week music program in Colorado that Holoman is attending, she will not be able to attend the NATS national conference.

Smith graduated from the University with a Bachelor of Music degree in May and was invited to compete in the Upper College Musical Theater Treble NATS category. Smith began competing in NATS in tenth grade.

Smith said that while voice lessons have been online amid the COVID-19 pandemic, she’s been much more relaxed in her own space. This led to vocal breakthroughs for her.

“I’ve been playing the piano since freshman grade and was very active in my church and was in a youth group in middle school singing and learning about worship music,” Smith said. “I think it’s more worship music oriented, that’s where I started to really want to think that maybe I could make a career out of it.”

Smith will also be unable to attend the competition due to his summer job. She said she was still proud to have come this far.

To get the day’s news and headlines delivered to your inbox every morning, sign up for our email newsletters.

What is the Cliburn Piano Competition and why is it important?