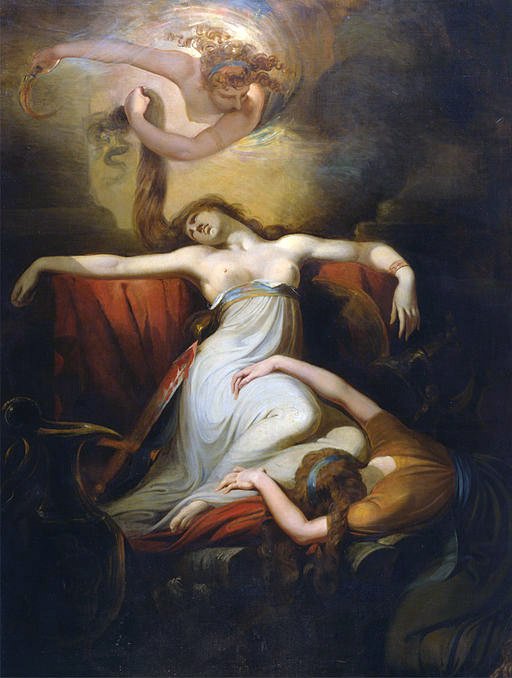 Would anyone deny that Dido’s Lament, by Purcell, frequently staged and highly regarded Dido and Aeneas is the saddest music in the world? Probably not, but librettist Stephanie Fleischman and composer Melinda Wagner dispute the story of the Queen of Carthage in the account by Henry Purcell and his librettist Nahum Tate. In planning and writing Dido reinvented: a response to Purcell’s Complaint, a chamber music co-commission from Rockport, who debuted Shalin Liu on Saturday night, they decided to set the record straight and give the queen a modern female agency. According to Fleischmann:

When Rocky Mosaic and I first talked about writing a contemporary Dido for Dawn Upshaw and the Brentano String Quartet, we immediately knew that our Dido would not participate in the representation of women imprinted in us by men at through the centuries. We also knew that Dido’s epic love for Aeneas and her self-immolation in response to what she perceived as her abandonment of her – romantic tropes crafted by Virgil and immortalized by Purcell and Tate (for Aeneas postdated Dido between 50 and 400 years) – were to be transformed in our hands. We have been constrained by the notion of epic love in contemporary times. What form might this take for a powerfully strong and complex woman of today, who has long since realized her full potential in terms of career and family?…

Our Dido, however, has the power to determine her own destiny. I have been fortunate enough to return, over the years, to a writing retreat on an island where there are no cars, no shops, only a few houses and a landscape strewn with ancient rocks, covered in blown by the wind and surrounded by the sea. Our Dido’s refuge was inspired by my stay in this place. Our Dido does not choose death. She moves away from the everyday world, she chooses solitude.

As the Brentano String Quartet and soprano Dawn Upshaw put it, the lyrics and music reflected “…the power of love, the passage of time, loss, resilience and the restorative power of a world endangered “. Upshaw, an expert interpreter of difficult contemporary scores, had (it seems) completely mastered the lamentable ariosos of interrupted poise style, in warm, cool, cajoling and lively tones, reigning with diva-like certainty over the vocal lines. angular and nervous, while the quartet drew on a catalog of effects: motorized grooves (sometimes simulating a motorboat) sul ponticello screeches, glides, scratches, thumps, as well as the conventional heat of a 12-string.

At times (as in The Motorboat) Wagner’s score responded with a painting of precise words to the lively and evocative five-part rock mosaic, irregular and rocky of Fleishman’s free verse. And when Dido “dissolves into the sea,” her voice disappears into the texture of the accompaniment. We heard moments of glistening, haunting harmony as Fleischman at the end recounts how Dido “returns endlessly / every day turning / in the crashing of the waves”. For too long, though Wagner seemed to be channeling anger rather than royal resolve or repose. When a listener can detect recurring thematic material, he feels intelligent; in the absence of such grounding, and we drifted on a sonically unstable sea, they or they can only imagine how the patterns could be consistent in larger designs. This made the job too long. But Upshaw, an ever-fresh-sounding diva with a string of wins over human vulnerability, has always drawn our attention to a modern Dido’s story with agency:

Much of the text placed us in a seascape familiar to visitors to Shalin Liu, and so the view through the glass back wall seemed relevant to the story, but the resolutely upbeat sunny summer fun scenes of sparkling water and dancing boats stole the show from the Upshaw. If the wooden screen had been closed, we could have entered the depressing and uplifting personal realm of monodrama with greater empathy. Also, allowing our vision to adjust to the diamonds on the water made the program invisible when we were looking down. It was one or the other, and I chose the booklet to save my sight and type in the text.

The first half, a Purcell and friends* medley of songs, arias, dances and fantasies that violinist Mark Steinberg and fellow violinist Serena Canin; Misha Amory, viola; | Nina Lee, cellist had concocted us, passed very pleasantly next to us.

The opening number, Oh let me cryfrom Purcell The Fairy Queen, Z629 (arr. Mark Steinberg), produced some concern for the afternoon course. This tune should have been the polar opposite of the famous lament that closed the set, but Upshaw sounded rather tremulous, and the accompaniment of the Brentano people sounded deferential and thin. Things improved quickly. The quartet sounded like itself in the Fantasy section of Suite no. 2 for four viols, and Upshaw returned to the usual form in number three, Dowland’s charmer, “Come back, sweet love now calls.” In Stephen Prutsman’s arrangement (the pianist-composer performs at the RCMF next week), the combined forces worked to their full satisfaction, the quartet sounding like a super lute consort with sustain and Upshaw regaining youthful luster. His perfectly focused instrument shot straight as an arrow, with a light, rapid vibrato at the end of phrases.

Throughout the songs and alternating instrumental parts, the string quartet produced an upright, warmly flowery and perfectly tuned tone that made the chromaticism of two Purcell fantasies most deliciously piquant. They’ve been playing this material for years, and the experience has been told.

The whole thing barely stacked up for dramatic effect…or avoided the curse of deja vu. We certainly expected a better setup for Final Lamentation than Robert Johnson’s penultimate ditty The Witty Woman provided. Fortunately, the poignant Purcell proved the transition with his Minor Fantasy in C, Z 738. If Upshaw had then sung “When I lay on Earth” on a dark stage surrounded by mourners, the aria might have produced the desired dramatic effect. Instead, we just heard a beautiful, well-sung aria.

The Rockport room with a view can sometimes overshadow the music and the musicians. This is certainly the case in this case. Unless management is considering bringing in a future Aeneas as a former sailor, please close the woven wood and metal blinds for this kind of spectacle and help performers transcend the everyday.

Lee Eiseman is the editor of the Spy

The “higher, leaner” sound of a soprano, with weight to spare – The Vacaville Reporter