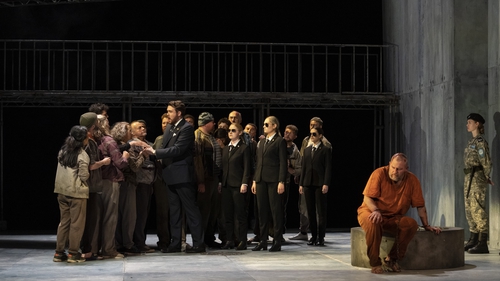 FILMS AND MUSIC WITH AEDÍN GORMLEY

As Tom Cruise celebrates his 60th birthday this weekend, Aedín looks back on his career and features music from a selection of his films, including The Firm and Born on the Fourth of July. Classic film music from The 39 Steps, Sunset Boulevard and Some Like it Hot. Dick Van Dyke entertains us in Chitty Chitty Bang Bang and Mary Poppins and Mark Rylance impress in The BFG scored by John Williams.

Sinéad Campbell Wallace is the devoted Léonore in Beethoven’s only opera for this Irish National Opera production under the direction of Fergus Sheil. The cast also includes tenor Robert Murray as Florestan, joined by Daniel Sumegi, Brian Mulligan, Kelli-Ann Masterson, Dean Power and David Howes. This production was recorded in November 2021 at the Gaiety Theater in Dublin.

Let the Hamilton Scores become one of your regular weekend fixtures as George launches an unbeatable list of great musicians and stories from his travels.

Mystery Train is a nocturnal journey through the many wonders of recorded music – from its vintage glories to the newest sounds. An essential listen for the discerning music fan.

Our concert today, Celebrating Gershwin, features a host of Gershwin’s finest melodies, telling the story of the life and times of the master-composer and his contemporaries, with original arrangements for the Julian Septet Bliss. From ‘Summertime’ to ‘Fascinating Rhythm’, iconic tunes are interspersed with favorites such as ‘Sweet Georgia Brown’ (Pinkard) and ‘My Ship’ (Weill) to create a varied and entertaining performance, punctuated by the vibrant creativity of the musicians. .Liz Nolan presents a showcase of full-length musical masterpieces, with live recordings from Irish and international artists, as well as selections from the latest CD releases.

Niall Carroll plays music from the heart of the classical repertoire. At noon each day, Niall chooses his Five of a Kind. This week, Niall chooses five overtures from the operas of Giuseppe Verdi.

Today’s Full Score concert is broadcast live from the stage at the National Concert Hall as Liz Nolan presents the next in the Summer Lunchtime Concert series. Karen Ní Bhroin conducts the National Symphony Orchestra to the music of Copland, Morricone and John Williams. The music continues after the concert as Shirley Keane presents a selection of favorites to accompany your afternoon.

Copland: Fanfare for the Common Man

John Williams: Fiddler on the Roof

The Accademia del Piacere performs works by Lully, Couperin, Marais and Rameau in today’s Full Score concert titled Echoes from Arcadia: The Golden Age of the Viola. Liz Nolan presents a showcase of full-length musical masterpieces, with live recordings from Irish and international artists, as well as selections from the latest CD releases.

Broadcasting live daily Monday to Friday evening from our Limerick studios, Lorcan Murray presents RTÉ lyric fm’s flagship show, Classic Drive. Lorcan brings the perfect musical soundtrack to you, wherever you are, sharing a music feast with the curious and connoisseurs and showcasing listeners’ choices. Included in this musical feast are the latest sports news and updates and tips for what’s happening where you are. There for all, Lorcan is with you all the way.

Paul Herriott revisits one of the highlights of the National Symphony Orchestra‘s 2021-2022 season. The orchestra is joined by the ONS Chorus and soloists under the direction of Nicholas McGegan to perform Handel’s Oratorio Messiah.