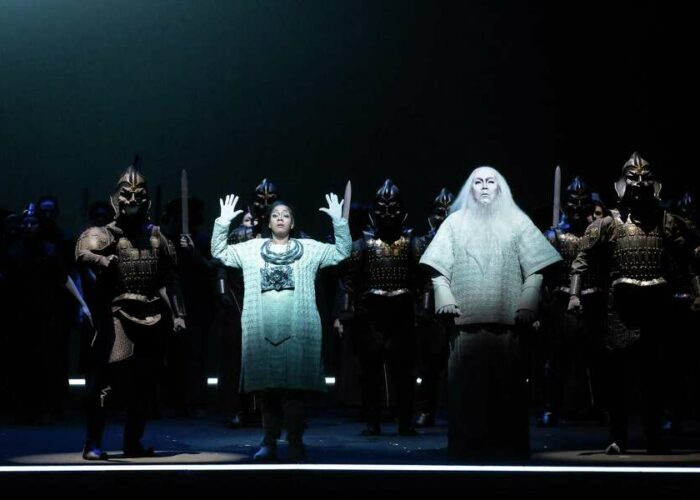 Discussing Liu in “Turandot,” Nicole Heaston draws an easy parallel between her role in Giacomo Puccini’s latest opera and another classic: that of Michaela in “Carmen.”

“I’m that girl, that unrequited love, the nice girl who really loves the lead tenor and he has no time for her,” says the soprano and Houston Grand Opera Studio alumnus. “He’s got his eyes on his head.”

HGO’s latest “Turandot,” which will be presented at the Wortham Center from April 22 to May 8, will be Heaston’s third time performing an opera that has fascinated and bewildered audiences for nearly a century. She recently sang Liu for the Maryland Lyric Opera; the previous time, shortly after singing Mimi in HGO’s 2018 production of Puccini’s “La bohème,” was aimed at a “ridiculously receptive” — and young — audience in Guadalajara.

“I took a picture and I was like, there’s not a single gray hair,” says Heaston, who lives in the Houston area and has appeared in several HGO Digital productions over the past year. “Young people were really excited to hear this music, but I fell in love with the music itself.”

Already the leading opera composer of his time, Puccini outdid himself with “Turandot”. Incorporating the tonal innovations of his peers such as Debussy and Stravinsky, he was also careful to evoke the mythical Chinese setting of the opera. He also died before he could complete the finale, a love duet between the title princess and Kalaf, the foreign prince determined to win her hand.

At the opera’s premiere in April 1926, conductor Arturo Toscanini simply laid down his baton when, as he reportedly put it, “here the maestro laid down his pen”. The ending has been subject to periodic changes since, but most companies (including HGO here) use the one written by Puccini’s contemporary, Franco Alfano.

For years, however, its end was the least of the opera’s problems. The source material was initially thorny: Puccini’s librettists used an 18th-century piece itself based on a collection of folk tales from several centuries earlier. Until recently, “Turandot” productions tended to lean heavily on grotesque Asian stereotypes by using “yellowface” makeup to make white Chinese actors appear, among other indignities.

As someone used to be the only performer of color on stage, “for me it was a joy to be with them and see them having fun with each other and me enjoying them too. , and never having been in a situation like this before,” Heatton says. “It’s really quite wonderful.”

Somehow, Puccini’s ravishing score always managed to transcend, if not excuse, the opera’s shortcomings. The BBC prominently featured Luciano Pavarotti’s 1972 recording of “Nessun Dorma” in its coverage of the 1990 World Cup, making Kalaf’s Act 3 aria perhaps the most closer than the world of opera has ever had to a hit single.

“I think Luciano Pavarotti has done a great disservice to all the tenors on the planet by singing that tune as well as he does, because the world knows his voice singing that tune,” Heaston said. “So every tenor has to live up to this moment, and they know they do.”

“That’s why it attracts some of the best singers in the business,” says Heatton. “Truly, the best singers are the ones who can do it justice, and when it’s done right, it’s amazing to listen to.”

For her part, Heaston explains that while her role as servant to Kalaf’s father, Timor, may not be as demanding as Turandot’s, Liu still enjoys a number of sublime moments. In “Tanto amore, segreto”, Liu must convince the chilly Turandot how much she loves Kalaf. His solution makes one hell of an exclamation point.

“She just puts her heart out there, and in that moment she could be broken,” Heaston says. “They keep abusing her, and she finds strength then lights up [Turandot] and said, ‘No – you know what? I made a decision. I am resigned. I’m going to kill myself so you never find out his name, just to protect him.

Chris Gray is a writer from Galveston.