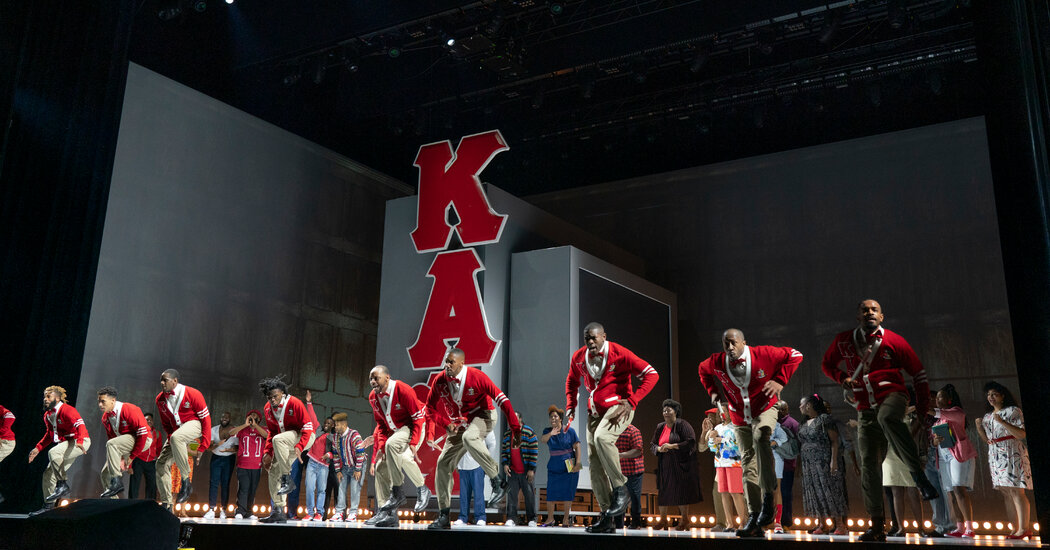 Camille A. Brown had a lot of catching up to do. She was not part of the original creative team for Terence Blanchard’s opera “Fire Shut Up in My Bones” when it premiered in 2019 in Saint-Louis. But at the Metropolitan Opera, where production runs until Saturday – the first time that a work by a black composer has been presented there in 138 years of history – its touch is palpable.

Clearly, she has caught up. And she goes down in history, too: Brown, who shares the directorial duties with James Robinson, is the first black artist to lead a Met production. She is also the opera choreographer and as such brought social dance – step, the form of percussion popular in historically black colleges and universities (HBCU) – to the Met’s stage.

Opening act III is a step number that stops the show in its tracks. On opening night, the dancers held their final pose, one foot crossed over the other as sweat trickled down their faces. Frozen in line in front of the audience, they tried to control their breathing as the audience clapped and roared. And clapped and roared some more. It lasted over a minute and it was spectacular.

When was the last time a Dance stopped an opera in its tracks? Brown, a Tony nominated dancer who choreographed “Porgy and Bess” under the guidance of Robinson at the Met, has never experienced anything like it.

“I was just thrilled,” she said. “I was delighted at the moment. I was thrilled for the social dance. I was delighted for the dancers on stage who had been working for six weeks to put on this show.

She added: “I feel like the audience – for me – was applauding for a number of reasons. It was about dancing, but it was about what it was like to see it on stage. And the inheritance.

The step and its use of the body as a percussion instrument speak of the black experience: when their drums were carried away, the enslaved people created a rhythm with their bodies. In the opera, the stage comes into play when the protagonist, Charles (Will Liverman), is a student and commits to the Kappa Alpha Psi fraternity. He also continues to struggle with the experience of being assaulted by his older cousin when he was a young boy, seen in flashbacks. (The opera is based on the 2014 memoir by New York Times columnist Charles M. Blow.)

Brown is adept at laying bare emotions through the body. The dancers, with outstretched imploring arms, move briskly and widely as if they were cleaning the stage with brushstrokes. Later they turn into trees as Charles sings: “We draw our strength from below. We bend, we don’t break. We’re wavering! “

As he sings, Charles rounds his body forward in a powerful contraction and opens his arms as he stands up straight and eventually rises above his pain.

In “Fire,” which hits theaters on October 23 as part of the Met Live in HD series, Brown shows off his choreographic lineup. “There was the more contemporary dance side, and then there is the more rhythmic side,” she said. “You don’t feel these extremes in one place very often.”

And her directorial prowess is only growing. Following? She runs the Broadway Renaissance by Ntozake Shange “For colored girls who have thought about suicide / When the rainbow is over”. Recently, Brown spoke about his work on “Fire” and honoring his ancestors. The following are edited excerpts from that conversation.

How did you, as a choreographer and director, envision opera?

When I work on a show, and as a director in my company, I always try to find, what is my point of entry into the story? I thought of some of my dear friends who had very similar stories, so I wrote it this way.

When I first heard about opera and found out there was a fraternity section, I was so excited. It is possible to do a dance step inside a opera?

Why is it so important to bring social dance to the Met’s stage?

We’re talking about Terence being the first black songwriter on the Met stage. And so with that comes the black lens and with this comes black culture spoken or danced through the black lens. And knowing that at some point in Met history black people weren’t allowed to perform on this stage.

So you go from there to now: we’re doing something that’s so ingrained in African lore on the Met stage. It is so powerful. You see the brotherhood-sisterhood, you see the HBCU, but you also see the Juba dance [the African-American percussive form that uses the feet and the hands]. And you see the African diaspora on stage.

How did you put the number together?

I was inspired by two films: “Drumline” and “School Daze”. I’ve always loved “School Daze,” and when that opportunity arose to create the fraternity scene, I thought it had to be a while. Yes, Charles is committing, and he’s going through that experience, but it’s also important, especially being on the Met stage, to show as much as possible what this whole experience is.

I mean the dream ballet. Is it okay if I call it that?

What were you thinking?

In any show that I have done, there is always a part that is really, really difficult for me. And that’s what you call the ballet of dreams. The first two weeks of working on it, I panicked a bit because I didn’t like what I was doing.

I was talking to my co-director, James Robinson, about the movie “Moonlight” and how Charles struggled with what we call ghosts in his dreams – and how they haunted him, but they attracted him too. And so I gave myself a break and I stopped criticizing myself and I said, You know what? Just play. Give yourself the space to figure it out.

How did “Moonlight” influence you?

Just by the beautiful imagery. Just wanting to talk about relationships and sensitivity, and how does it feel to touch someone for the first time? Feeling like it’s wrong, but wanting to believe everything is fine.

How involved were you in the first act?

It can be easy for someone to get in and out. Oh, well, she just did the choreography. But it really wasn’t. James and I both thought about the scene of the molestation and how the choir interacted.

Most of the choir members were also in “Porgy”, so I had worked with them before. We were talking about how they or they move because even if they don’t technically dance, they move anyway. And that’s the 1970s. We watched some videos and discussed: What were the little paths people took to indicate the period?

Was Catherine dunham in your mind throughout this experience?

Due to your use of social dancing and the fact that she choreographed at the Met. And because much of this opera, at its root, is about the body as a force. It’s urgent. It reminded me of your lineage.

I always wear it with Pearl Primus, Dianne McIntyre and Marlies Yearby in space with me. It’s a historic moment, but it’s also about the people who paved the way for you. It comes from a deep place – it comes from social dancing. How can I contribute to this heritage of black choreographers exploring the African diasporic space? It is about contributing to space. When we do what we know and show how honest we are with our decisions, it’s honoring our ancestors.