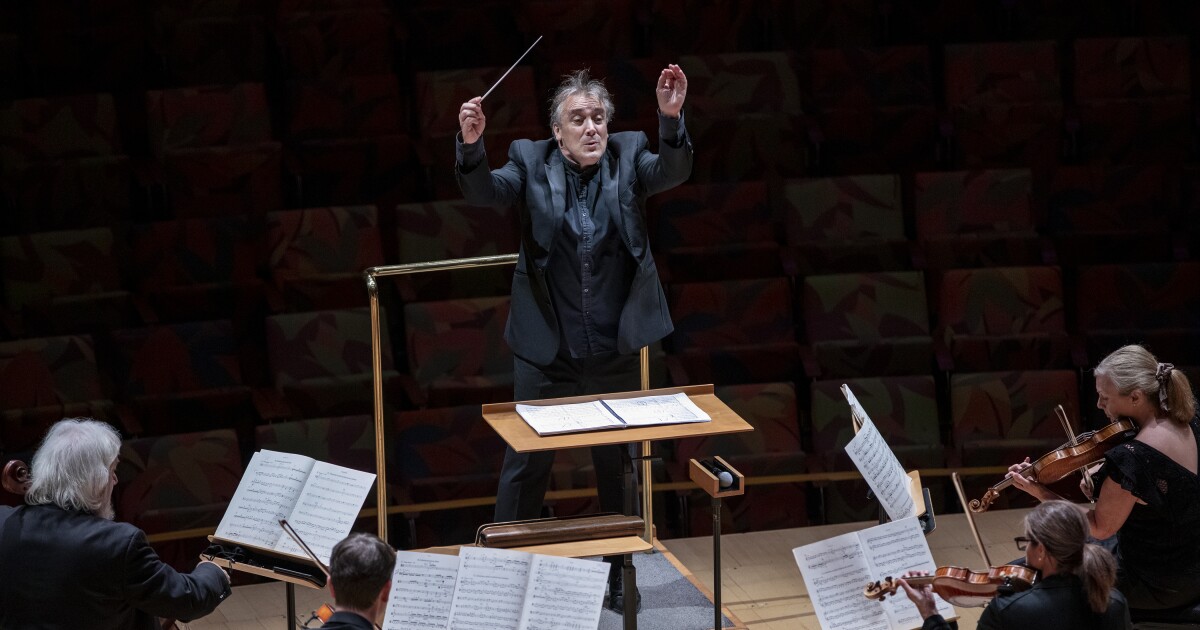 The last music heard in the Walt Disney Concert Hall before the pandemic closed was pianist Conrad Tao’s performance of Frederic Rzewski’s “The People United Will Never Be Defeated”, which is part of Power to the People at the Los Angeles Philharmonic. ! Festival.

Well, we didn’t exactly stay united for the 474 days (if I’m counting correctly) until live music was heard again at Disney Hall on Saturday night. But we have, in exciting and frightening ways, explosively fueling people’s power over these months.

The first notes heard again in the long-silent Disney were a slow and smooth ascending harp arpeggio, each pitch a crystalline, haunting moment echoing through the air like a harp in the illuminating acoustics of the room, stopping the breath and listener time – each note has a strange resonance to remember.

The program was not from the LA Phil but from the Los Angeles Chamber Orchestra, its usual venues at UCLA and Glendale were still dark. The opening piece was Ginastera’s â€œVariaciones Concertantesâ€. The strangeness was due to a seemingly supernatural twist of fate.

Rzewski’s politically provocative set of variations, one of the most important piano scores of the past half century, was based on a Chilean protest song. Ginastera’s 1953 chamber orchestra â€œVariacionesâ€ was composed as the Argentine composer had his own political clashes with his country’s dictator, Juan PerÃ³n. On Saturday, just hours before the LACO concert, Rzewski died of heart failure at age 83. These first six ascending harp pitches, derived from the open strings of the guitar, became his strange sendoff.

There was no mention of Rzewski. The concert was a celebration, not a memorial. We returned to concert life in Los Angeles with caution. First with the LA Phil in a heavyweight show at the Hollywood Bowl, then with Los Angeles Opera‘s â€œOedipus Rexâ€ in the Dorothy Chandler Pavilion. In both cases, the masks remained for the public. It was not yet time to breathe an indifferent sigh at the end of a pandemic.

It still may not be, but a lot has changed even in the three weeks since â€œOdipeâ€ Across the Street. Proof of vaccination was still required, and county regulations continue to restrict audience size to around one-third of capacity. But when principal violin Margaret Batjer took the stage to tune the orchestra, she threw off her mask triumphantly. The masked players triumphantly threw theirs away. Jaime MartÃ­n, the Spanish musical director of the orchestra whose contract has just been extended until 2027, has been as lively as a victorious bullfighter. The audience at this time was also mostly maskless and delusional.

To follow it all not with a splash but awe of the serene sonic splendor of a harp was a moment of genius. Ginastera’s score ignites pretty early. A tender theme on the cello alone leads to a series of colorful variations that highlight the virtuosity of the solo instruments. It ends with a rewarding dance.

The rest was just happy music. Young Mexican composer Juan Pablo Contreras has released a new version for chamber orchestra of his best-known piece, â€œMariachitlÃ¡nâ€ (Mariachi Land), written in 2016 while a student at USC. A mix of 10-minute mariachi bands, separate tracks and played together, begins as a sort of Guadalajara take on Ives’ evocation of colliding bands but remains more conventional, even slightly Hollywood at the end. A bland two-piano chord aired in January in LACO Close quarters video series. The new orchestration gives the score a splendid life.

The concert – without an intermission, program notes read over the phone rather than on paper – ended with Mendelssohn’s most brilliant symphony, his Fourth (â€œItalianâ€). This, and everything that came before it, was a parade of exuberance, a sort of psychotropic auditory drug, dispensed by Doc MartÃ­n, to boost morale. It worked with what appeared to be 100% efficiency.

This was especially striking, given the brooding visual tone of LACO’s video pandemic offerings led by James Darrah and the bewildering sight of musicians performing in their individual safety glass cages. In contrast, Saturday was an evening of freedom. The Ginastera solos declared in any case, “I am back in my glory.”

â€œI can’t tell you how happy I am to be here,â€ MartÃ­n told the audience at the end of the merry Mendelssohn. At this point, the line seemed almost redundant. All evening, MartÃ­n had conducted like a hungry musician at a gastronomic feast, each phrase being a piece to share and to savor. LACO, which sounds more alive than ever at Disney, has made a compelling argument for a large acoustic space of its own, as it will be if and when Colburn School builds its Frank Gehry-proposed concert halls, complete with acoustic of Yasuhisa Toyota, across Grand Avenue.

Meanwhile, MartÃ­n’s ways of winning quickly spread across three continents. In addition to his position at LACO, he is the Principal Conductor of the RTÃ‰ National Symphony Orchestra of Ireland. Next year he adds the Melbourne Symphony Orchestra. I hope he enjoys air travel as much as he enjoys letting a lyrical line take flight.

Saturday concert, broadcast Monday evening on KUSC, remains archived for a week. LACO will air it in July with a MartÃ­n program and the orchestra will play at the Huntington Library on Thursday.