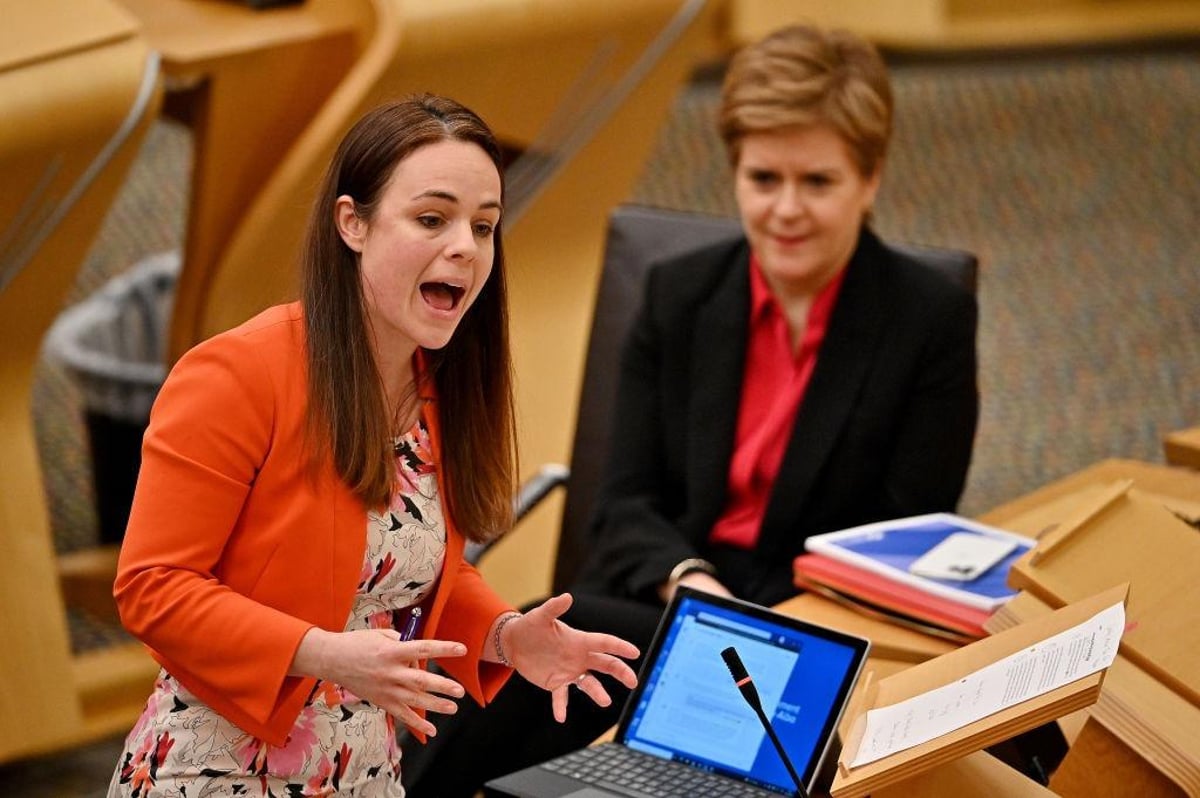 The SNP argues that when it has the levers of power it will be able to manage the Scottish economy better than it is currently. However, I suspect one of the main levers will be their ability to borrow money and I assume that would be by issuing Scottish government bonds.

As a new state with no history and no central bank, these Scottish government bonds would presumably be seen as quite a risky investment and priced accordingly. Knowing that interest rates are generally expected to continue to rise, how will the interest on the vast sums borrowed be served, let alone the repayment of principal?

Finance Secretary Kate Forbes could get less than she bargained for in an independent Scotland, a reader believes (Photo: Jeff J Mitchell/Getty Images)

For my part, I am happy to live in Scotland and to be able to enjoy the benefits that a Scottish devolved government has brought to everyone in Scotland.

I hear all the moans and complaints about budgets and spending but if I lived about 100 miles south I would have to pay something like £43 to get my prescriptions. My trips to the local hospital would not be of the same good standard according to the information that is reported for those south of the border.

Additionally, I would look north to get some of my electricity from mainly renewable Scottish generation.

Finally, if we are currently a UK, there must be some part of the Bank of England (note the name) that we contributed to that would belong to an independent Scotland, especially since much of it comes from oil from Scottish waters.

All in all, thanking my lucky stars that I am where I am and the prospects for the future look bright compared to the mess Westminster has to offer.

I watched Sir James Eadie take the UK government’s case over an Indyref 2 to the Supreme Court this week with interest. In 2006, I appointed him adviser for the public inquiry into the great outbreak of E. coli O157 from 2005 in South Wales which I conducted for the Welsh Assembly Government.

There was a pioneering aspect to our work as the inquiry was the first to be set up under the Inquiries Act 2005, under which the Covid-19 inquiries have since been established. Our work went smoothly and without interruption.

Our report was released 36 months after the start of the investigation. Unlike Covid-19, it involved a single event caused by a well-known pathogen and the failure of evidence-based infection prevention measures that had been in place for years. I dread to think how long it will be before the findings of the much more complex Scottish Covid-19 inquiry emerge. Time is not on his side if he is to live up to the expectation that his work will protect us from the next pandemic.

Two questions arise. Why have a Scottish inquiry when the UK one will cover exactly the same fundamental issues, and why should a public inquiry be chaired by a judge?

Stan Grodynski is right to draw attention to the £4.5billion lost due to mismanagement during the Covid crisis by the current Conservative government (Letters, October 14). However, he somewhat undermines his point by suggesting that the equivalent loss of £400m to Scotland would be enough to cover the Scottish Government’s waste of money in the ferry debacle, the cost of a referendum campaign and the establishment of bogus embassies abroad. He points out that not only do we have a government in Westminster, but also in Holyrood that is embezzling taxpayers’ money on a massive scale.

Fortunately, we live in a democracy, contrary to the daily protests of the SNP that we don’t, and have built-in mechanisms that allow us to replace failing governments. They are called elections and those to come allow us to glimpse soon the opportunity to put in place regimes which, freed from crippling constitutional argyries, can focus on the real daily problems of government in the public interest.

Could someone explain what is the moral difference between the following options. The first is to give tax cuts to the very rich. The second is to accept soup kitchens for the poor, hungry and homeless on the streets of Scotland’s largest city on the coldest nights and watch drug deaths propel Scotland to the top of the league. Meanwhile, bogus embassies continue to be built and staffed and SNP ministers and their entourages embark on onerous overseas jaunts, the latest being to Iceland?

Aren’t both equally morally repugnant in the midst of a cost of living crisis? And, dare I say it, detestable?

The Reverend Jack Kellet’s distortion of scripture in defense of the Prime Minister (Letters, October 14) is compounded by his failure to acknowledge that two MPs, in the last six years, have been murdered while working in their constituency by people who hated what they stood for.

CEBR, however, did not take into account the effect of fleet electrification on the caravan industry, which contributes £6 billion a year to the UK economy in sales of products and services and employs 130,000 people. Almost all caravans sold in the UK today are made by Swift in Cottingham, Bailey in Bristol, Elddis in Consett and Coachman in Hull. A British success story. Most caravans weigh over a ton and a half and much more than two tons. Battery cars cannot tow them.

It is only one industry that government plans will destroy through unintended consequences. How many other industries will fail because reliable diesel and gasoline vehicles are no longer available?

Critics miss the elephant in the room as to the chasm between English and Scottish domestic football. England’s well-deserved dominance in Europe has been the end product of determination at the highest level to ensure domestic competitions remain competitive. Scottish fans will never see such wonders as Leicester City’s ‘impossible’ championship. The dodgy penalties, the wisely timed dismissals and suspensions of key opposition players, the range of sharp workouts ensuring there will never be another like Alex Ferguson’s Aberdeen or Dundee, Hearts and Hibernian by Gordon Smith. The central tenet at SFA headquarters is that nothing should threaten the Old Firm’s hegemony or its toxic miasma on society as a whole: and with that, a huge deterrent to any investor considering getting involved. at any Scottish club at the levels found even in non-league Wrexham and Macclesfield – let alone an English premiership team. Scottish football is the metaphor for the nation – festering in deliberate mismanagement to ensure the ‘ascendancy’ of the status quo in perpetuity. Know that your place is now Scottish – with all the mediocrity that comes with it.

I am sorry that we are deprived of the view of the House of Lords, all decked out in their robes and crowns at the coronation of King Charles next year. Being a Gilbert & Sullivan enthusiast, I was eager to see the exact costume worn by their Lordships. Gilbert was a stickler for precision and at Iolanthe, under his guidance, the costumes of the Knights of the Garter, Thistle, St Patrick and KCBs were declared by one reviewer to be “correct to the end of a ribbon”; however, modern interpretations of the piece often do not bother with such subtleties.

Never mind Westminster Abbey in 1953, I was hoping to see what audiences at the Savoy saw in 1882!

In your report “Bocelli sues air charter company over noisy old jet”, you describe Andrea Bocelli as an Italian opera singer (October 13). It’s wrong. Mr. Bocelli may be Italian, but he’s not an opera singer. He’s never sung an opera. He’s a popular crossover figure but an average singer. Compared to almost all the operatic tenors on the circuit, his talent is minimal. It is the product of clever marketing, nothing else.

Please stop describing him and his ilk as opera singers. True opera singers practice their profession for years, unlike this man.

Your thoughts are welcome. Write to [email protected] including name, address and telephone number – we will not print all the details. Keep letters under 300 words, with no attachments, and avoid “letters to the editor/readers” or the like in your subject line. Do not send letters submitted elsewhere. If you refer to an article, include the date, page number and title.