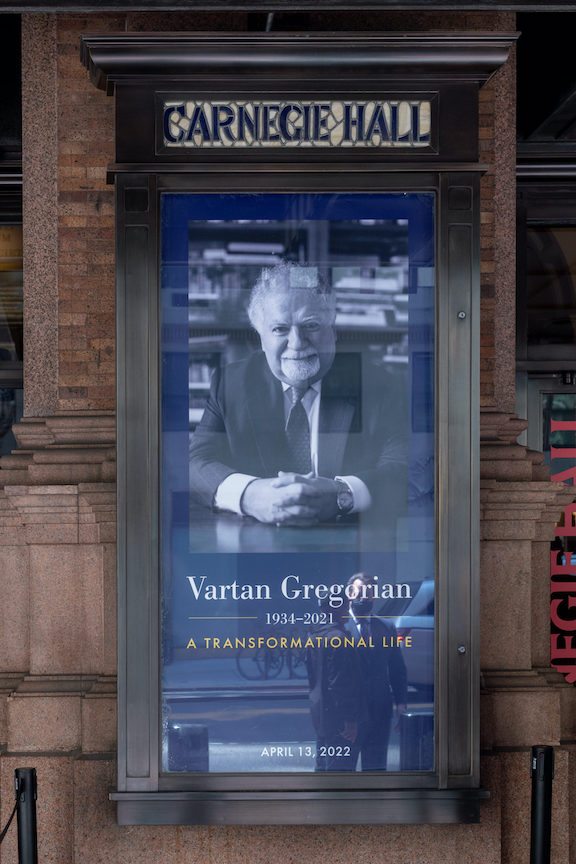 Gregorian created an amazing legacy by immigrating to the United States from Iran. He most recently served as president of the Carnegie Corporation of New York until his death a year ago at the age of 87.

Many speakers noted Gregorian’s respect for education, a faith he practiced as a distinguished historian and humanities scholar with a doctorate from Stanford University and propagated as president of the Brown University. They recalled how Gregorian quoted prominent writers such as Persian and Arabic classical poets and French and Russian authors and philosophers in his daily conversation. He also quoted aphorisms from his beloved grandmother Voski Mirzaian, who raised him with her younger sister Ojik.

“When you buy a horse, you buy both ends,” New York Botanical Garden President Emeritus Gregory Long recalled of his favorite aphorism from Gregorian’s grandmother, to resounding, conniving laughter from the audience. .

Historian and biographer Robert Caro recounted how Gregorian inherited an insolvent and inefficient system, visible in the dirty facade of the library and the plywood used to create makeshift cubicles. Thanks to Gregorian’s fundraising skills, “the facade was cleaned, the plywood was gone, the marble was polished” and “everything seemed to be running more efficiently.” Public confidence in the library was restored and the institution was saved for future generations of learners.

The afternoon was brightened by laughter, as speakers told stories of the ever-present charm and wit of their dear friend Vartan, Greg or VG as he was known.

“Raise your hand if you’ve ever received newspaper clippings in the mail from VG,” Gregorian executive assistant Natasha Davids said. The audience erupted in laughter, as dozens of hands went up in the air.

Gregorian was known to mail snippets of articles to friends and family that he hoped they would find interesting or informative, Davis said. He continued this practice late in his life, collecting hundreds of newspaper clippings into trash bags for later delivery.

The service was also marked by a respectful reflection on Gregorian’s successes, despite the difficulties of his youth.

“Vartan did not live in the perils of the Middle East,” said his lifelong friend Sahag Baghdassarian, with whom he was a classmate at Djemaran in Beirut. “He led a life such as the founders of Djemaran would be proud of.”

Gregorian’s son, Raffi, spent his last days with his father discussing intergenerational trauma. Gregorian’s childhood was marked by pain and loss, including the death of his mother when he was just six years old and the absence of his father.

“I was wondering why, despite everything, my father hadn’t become a monster? Why didn’t he do the same things to us that his father did to him? That’s all he knew,” Raffi reflected during his eulogy.

“He said that despite his father’s failure, he had known his mother’s love. He had his sister Ojik and his maternal grandmother Voski, his illiterate teacher of morals, dignity and integrity,” Raffi continued, recounting the community that surrounded his father throughout his life.

Raffi’s voice shook, filling with tears, as he concluded by thanking his dad for helping him “discover how to break the intergenerational transmission of trauma”.

“Vartan, teacher of courage, example of pride and ingenuity, American original, Armenian strength, the only way to thank you is to persevere. Never say die. Everything is possible. Just keep going,” Balakian recited.