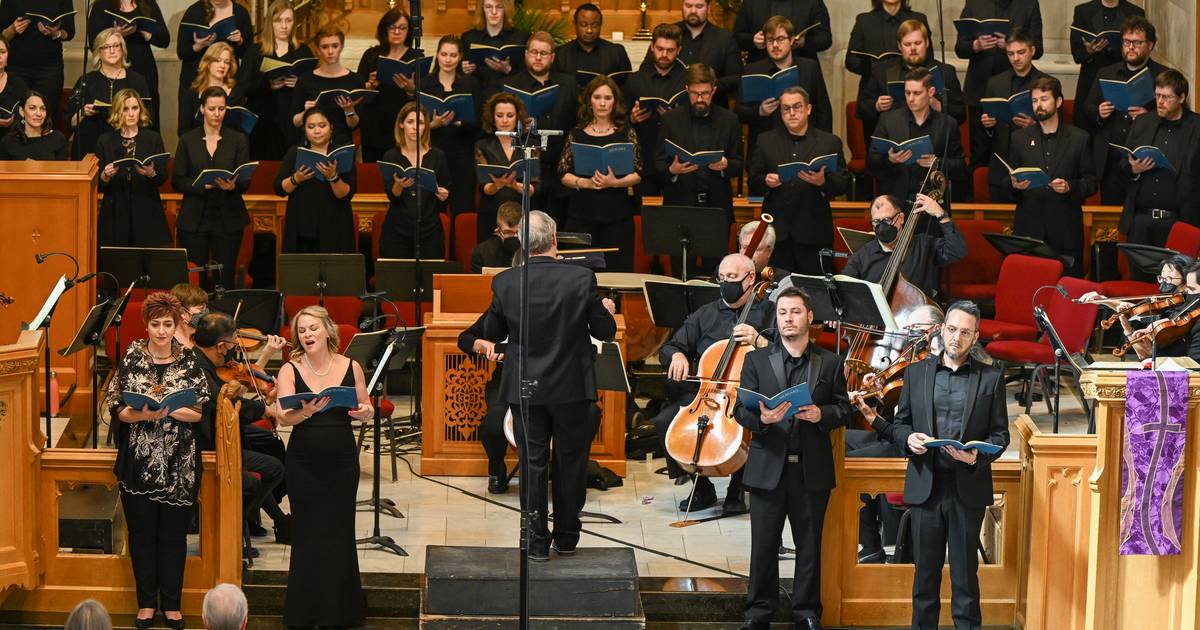 The critically acclaimed chamber choir’s “Mozart Journey XVII” program with the Metropolis Chamber Orchestra is the latest leg of its 12-year excursion through the classical composer‘s complete sacred choral works. It is believed to be the first American choir to perform all of this kind of Mozart music.

While audiences at previous Mozart Journey concerts have often been treated to sacred choral works that are rarely performed, conductor Hunt says the August performances feature some of Mozart’s best-known music.

Mozart wrote these works in 1791, his last year. He succumbed to the disease at age 35.

“We thought it would be a fitting finale to Mozart’s journey to offer sacred choral works and an impassioned operatic excerpt representing the high point of Mozart’s career,” Hunt said.

For variety, the concert also includes Mozart’s emotional Symphony No. 25 in G minor K. 183, written when he was just 17 years old.

“Music lovers looking for a summer respite and a break from routine can bask with us in Mozart’s majestic, mystical, and immortal music,” says Hunt.

Considered one of the most powerful and moving works in all of classical music, Mozart’s Requiem in D minor for choir, soloists and orchestra was his last composition.

Seriously ill, Mozart died before he could finish him. His pupil Franz Süssmayr completed the Requiem, but an aura of mystery still surrounds it and the circumstances under which it was commissioned.

Hunt says it is a sacred work that displays the dramatic and expressive range of an opera. He also admires “the richness, variety and depth of the music offered to the choir as well as the soloists” and the way Mozart balances moments of dread and awe with hope and reflection.

“Mozart’s writing for the voice is impeccable,” he says. “Nothing is taken to extremes. Everything is exactly as it should be.”

The aria “Non più di fiori” is a compelling soprano centerpiece sung by the character of Vitellia, who faces execution for plotting the assassination of the Roman Emperor out of romantic jealousy.

He is also notable for his charming and virtuosic basset horn accompaniment, says Hunt.

The basset horn, a deep-voiced member of the clarinet family, also figures prominently in the Requiem, which Hunt cites as one of many attractive connections between Mozart’s secular and sacred music.


Soprano Michelle Areyzaga, a former St. Charles Singers backing vocalist who has won acclaim in the professional opera and concert world, will perform with the St. Charles Singers as a guest soloist at the end of her decade "Mozart’s Journey" project with concerts on August 27 and 28.” width=”600″ style=”max-width:100%;width:100%;” class=”lazyImg”/>

Soprano Michelle Areyzaga, a former St. Charles Singers backing vocalist who has won acclaim in the professional opera and concert world, will perform with the St. Charles Singers as a guest soloist as she wraps up her project to a decade “Mozart Journey” with concerts on August 27-28.
– Courtesy of Elliot Mandel

The guest soloist for the “Requiem” and aria is Chicago-born soprano Michelle Areyzaga, who grew up in the western suburb of Elburn. A former backing vocalist with the St. Charles Singers, she has enjoyed success as an operatic, concert and recital performer.

Mozart composed his Latin hymn “Ave verum corpus” for the choirmaster of a local parish church in the small Austrian town of Baden, near Vienna, where Mozart’s wife, Costanze, was recuperating at a spa.

“The Compleat Mozart”, a standard reference work, characterizes this compact motet, composed for choir, string ensemble and organ, as “a pure distillation of heartfelt devotion”.

At just 46 bars in length, it is considered one of Mozart’s most effective and perfectly crafted compositions, says Hunt.

“If I had to describe it in one word,” Hunt says, “I would call it sublime.”

The Metropolis Chamber Orchestra shines the spotlight on one of Mozart’s “tragic” symphonies, the tumultuous Symphony No. 25, sometimes called the “little symphony in G minor”.

Like other symphonies in minor of the time, it borrows its urgent and tempestuous character from the world of opera, drawing inspiration from the musical style “Sturm und Drang” (“Storm and stress”) in vogue at the time. .

Jonathan Saylor, professor of music at Wheaton College, will give a 30-minute pre-concert talk at the church one hour before each concert.

Single admission to “Mozart Journey XVII” is $40, $35 for those 65 or older, and $10 for students. Group discounts are available.

Tickets and information are available at stcharlessingers.com or by calling (630) 513-5272. Tickets are also available at Townhouse Books, 105 N. Second Ave., St. Charles (check or cash only at this counter). Tickets can also be purchased at the door on the day of the concert, subject to availability.

Origin of the trip

The St. Charles Singers launched their “Mozart Journey” initiative with the Metropolis Chamber Orchestra in January 2010 as a long-term, multi-year celebration of the choir’s 25th anniversary concert season. The project encompasses the entirety of Mozart’s sacred choral works, presented in 17 different concert programs in venues across Chicago and the western suburbs, including neighborhoods and cities where the St. Charles Singers have never performed previously.

Founded and directed by Jeffrey Hunt, the St. Charles Singers is a chamber choir dedicated to choral music in all its forms. Hailed by the American Record Guide as “a national treasure,” the mixed-voice ensemble includes professional singers, choir directors, and voice teachers, some of whom perform with other leading Chicago choirs. Classics Today called the ensemble “one of North America’s outstanding choirs”, citing “first-rate charisma and musicianship” that “brings character and excitement to every piece”. The Chicago Tribune described the St. Charles Singers as “beautifully disciplined, beautifully responsive” and proclaimed, “Chamber choir singing doesn’t get much better than this.”

Closing ceremony organized for the celebration of the bicentenary