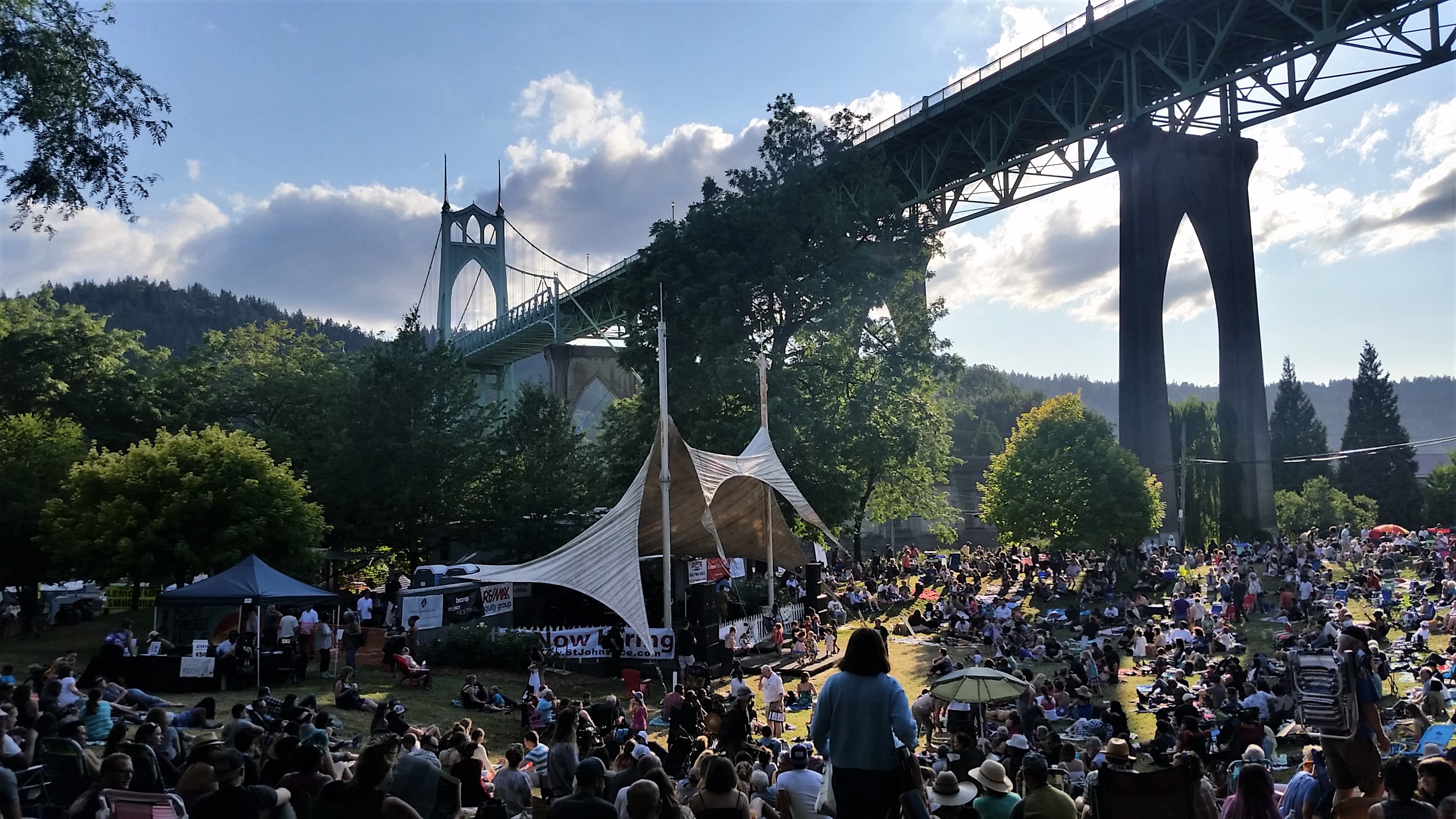 The sun is (fingers crossed) here to stay, and summer is festival season in Oregon. Sometimes I get a little of that summer sadness beginning of July because my body has not yet caught up with the weather. But, at the very least, there’s plenty to do to get us out, in the sun, to get the vitamin D we so desperately need.

The annual Chamber Music Northwest festival is this month’s big event in the classical music world. There’s too much to cover here, a testament to the quality of their programming. Stay tuned this month for weekly coverage from the [email protected] series of premieres and contemporary classics. The [email protected] concerts are all great, but the one that stands out is Andy Akiho’s full performance seven pillars by Sandbox Percussion, with staging and lighting by Michael Joseph McQuilken. Catch this show on the 19th at the Alberta Rose Theatre.

Another CMNW highlight is the two nights Colors of Debussy and Crumbfeaturing the French master’s underrated solitary string quartet and Crumb A journey beyond time, a setting of African-American spirituals for baritone, piano and percussion quartet. To become Viano String Quartet plays the first, while the second will be sung by Kenneth Overton next to Ellen Hwangbo and the wonderful Percussion sandbox. You can see him live at the Reser on the 14th or at the Kaul Auditorium on the 16th. Debussy returns to Shades of Impressionism the 30th, alongside Franck’s Piano Quintet and the creation of Fang Man’s partridge sky.

Curiously, the CMNW commission from Oregon composer David Schiff – his Chamber Concerto No. 2, “Rhythms of the Vine”–should only be performed in selections to be the last [email protected] on the 27th. But don’t worry: the whole thing will be exposed to the Seasonal rhythms concert on the 28th at the Reser, alongside selections from Tchaikovsky Seasons and Piazzola Four Seasons of Buenos Aires.

Another great show to see is 23 at Kaul Auditorium, featuring the Grammy-winning soprano. Dawn Upshaw. In the past she has premiered works by some of my favorite composers, including Dutilleux and Saariaho, and you’ve probably heard her on Nonesuch’s infamous Gorecki release. Third symphony. In the first half of the program, Upshaw sings Renaissance songs by Purcell, Locke, Dowland and Byrd, accompanied by the Brentano Quartet. The second half is the West Coast premiere of the opera/oratorio co-commissioned by CMNW Dido reinventedwith the music of the Pulitzer winner Melinda Wagner and booklet of Stephanie Fleischmann. I am delighted to hear what they are doing to reinvent Purcell’s opera.

At the end of the festival on the 31st, I would not miss the opportunity to hear Schoenberg’s brilliant string sextet Verklärte Nacht (“Transfigured Night”), one of my favorite pieces from the Austrian avant-garde before his trip to the dodecaphony: it’s a work of stunning beauty that takes the lush harmonies of late Romanticism to expressive extremes . Also on the list are Strauss songs performed by mezzo Flower Barron and Strauss’ String Sextet Caprice.

If all new stuff and antonal-adjacent stuff isn’t your vibe, you might consider An evening with the Brentano String Quartet on the 21st, with string quartets by Haydn, Bartók and Dvořák. Or go Americana with the Sinta Saxophone Quartet on the 24th and 25th, when they perform music by Mark O’Connor and John Mackey, the premiere by Chris Rogerson Meditation for violin and saxophone quartet (with CMNW co-director Soovin Kim), and Alistair Coleman’s arrangement of Rhapsody in Blue (with pianist Gilles Vonsattel).

Cascadia Composers Annual In good hands concert takes place this Saturday, with two shows at 2:30 p.m. and 4 p.m. respectively at Lincoln Recital Hall. The show runs the gamut of talent local composers, with works for violin, piano and voice. Cascadia has taken a hit in terms of membership during the pandemic as people forgot to pay their dues and let membership expire, deemed it no longer necessary, or perhaps moved on. But luckily, as composer and board member Jeff Winslow told me, their membership is back to what it was before with over a hundred (!) members.

The Summer Jazz Festival is finally back at Cathedral Park, and what could be better than listening to the best jazz musicians in town under the magnificent St. Johns Bridge? As a friend said at last year’s festival, it should be called an “American Music Festival,” since there was so much more than jazz on stage. At this festival, I was blown away by the size and diversity of the audience, which I think had to do with the fact that it was the first major outdoor gathering in over a year. The full swath of the Portland community showed up: young women in sundresses and young men in T-shirts hanging out with their friends; children let loose by their parents to do somersaults and somersaults in front of the stage; stoners sneaking into a vape and aging hippies smoking openly; families of three or more generations speaking their mother tongue; the locked up happy to hang out and leave Discord for a while. Even dragonflies and mason bees came out to see what was going on. An atmosphere similar to that Oregon Fairhappening outside of Eugene this weekend.

The line-up for this year’s Cathedral Park Jazz Festival is almost entirely different from last year’s, although of course Mel Brown will be in attendance. The headliner of the first evening with blues accents is Tony Colman, who resides in Portland after drumming with BB King, Albert King, Etta James and countless other legends. His set will be a tribute to “Three Kings: BB, Albert and Freddie”. Saturday evening ends with a set of outer orbit, a band with many great members, including vocalist Sarah Clarke, Galen Clark (Subtonic Trio) and Damian Erskine (Skerik Band). I got to see Clarke play last year with drummer Machado Mijiga, which blew my mind, so I’ll be thrilled to see Clarke perform with his latest band. And yes, they will also be at the Oregon Country Fair on the 10th.

Finally on Sunday, Cathedral Park welcomes the last project of Bigger, featuring the voices of members of Albina’s artistic community. And between the cracks there will be plenty of other great bands worth hearing, including City Soul Bridge, Pura Vida Orchestra, brown sunflower and Rebecca Hardiman. It’s a diverse set, so might as well spend as much time as possible at this free outdoor festival: visit vendors, grab a drink or three, and check out some of the great restaurants and shops in St. Johns.

Starting Wednesday night, the Music on Main series returns to downtown Portland. The free outdoor series kicks off at 5 p.m. on the 13th with Melao of Cuba. The Afro-Cuban-jazz band plays a tight-as-hell take on the Cuban classic”Gunatanamera”, among other great tunes. Redray Frazier play the following week. Her music strikes me as combining so many styles of American music (soul, hip-hop, rock, R-and-B) that people give up trying to categorize her, instead focusing on her beautiful voice and throwback tunes. The following week, the 27th, Portland bluegrass and country stalwarts Straw get on stage (I heard a lot of Jackstraw growing up, since my parents were big country roots and bluegrass fans).

Speaking of outdoor music, I definitely wouldn’t miss the Portland Cello Project at Topaz Farm on the 17th. This is where Third Angle has put its Fresh Air Party last year, which I really appreciated. PCP cellists will play arrangements by Elliott Smith, Radiohead and Prince, three artists who truly take the genre of pop music to a new level of richness, complexity and experimentation – much like the arrangements of Alarm Will Sound tunes from Aphex Twin or countless examples of cult Beatles. Here’s to hoping Bjork, Joanna Newsom and Kate Bush are next in line for some love by the classic community. For a taste, listen to the cello version of Smith’s “Between the Bars”.

There are also some cool experimental festivals this month. One is Verano: an ambient and experimental electronic summer experience on July 9 at the Leaven Community. The show will feature ensemble artists from Portland and Seattle in stereophonic and quadraphonic sound. If you’ve never had the chance to hear a quadraphonic set before, it’s a crazy experience to hear sounds buzzing around your head in all directions. I wouldn’t miss an opportunity to hear it in person. Also this Saturdayanother experimental electronic show haunts the Coffin Club (formerly known as Lovecraft), featuring local artists Elrond, Sumner and Badrich (as well as Snowbeasts from Rhode Island).

I should also note some of the great out-of-town artists worth checking out this month. We’ve got some great shows from some of the upcoming indie rock favorites, including parade of wolves this Friday, Yuvees opens for Cola this sunday and Waves on the 25th. We also have a show by the underrated spear of fire on the 26th, one of lots of big ones Reggae artists who is not the one everyone knows. We even have some cool young cats in jazz, like the tenor saxophonist and epic composer Kamasi Washington at the Crystal on the 30th. Also, as I mentioned last week, George Mother-Freaking Clinton.

A season of stellar music