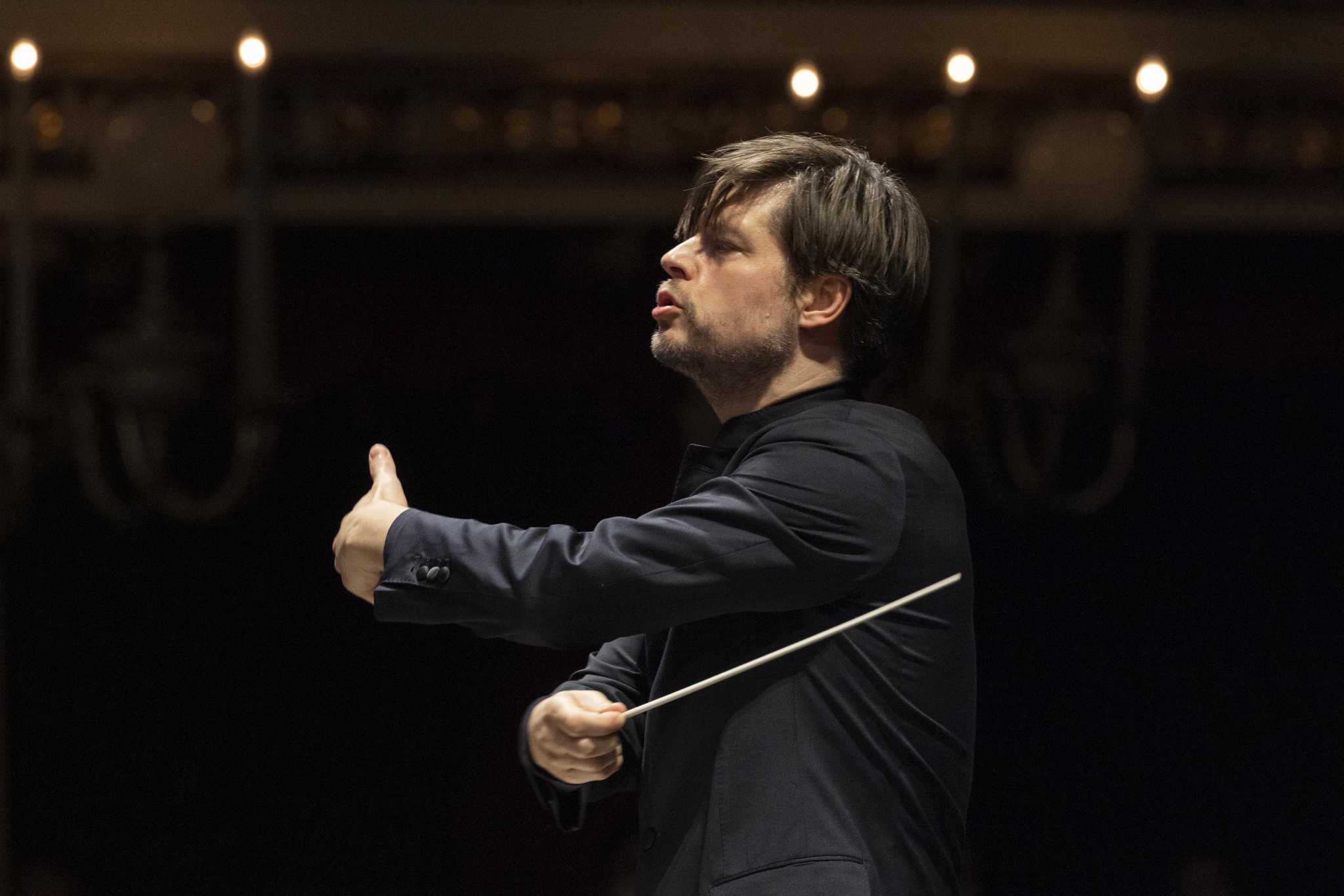 The Slovakian capital of Bratislava, birthplace of Houston Symphony Designated Music Director Juraj Valcuha, is a cultural hub: close enough to Vienna, Budapest and Prague to make it an interesting place to grow up. The countryside is saturated with folk traditions and the music that accompanies them.

“In every village, every part of the country, you have a different language, different kinds of melodies – extremely rich,” Valcuha said, during a rehearsal break earlier this month at Jones Hall. “That’s why Bartok was very interested in this part of Europe.”

Valcuha’s musical education began with the folk songs he heard his mother sing. Inspired by a great-grandfather who played it – and learned it while working in the steel industry in Pittsburgh – he also became interested in the cimbalom, a trapezoidal string instrument similar to a hammered dulcimer. Hungarian composer Zoltan Kodaly made great use of its unique sound in his folk opera “Háry Janos”; the opening scenes of Guy Ritchie’s first film “Sherlock Holmes” also feature the cimbalom.

But the orchestral demand for professional cimbalom players is not great, so on the advice of his father, Valcuha (now 46) turned to the study of composition and theory when he entered the Bratislava Conservatory at the age of 14. Composition students had to conduct their own works, and “My teacher told me I had to do it seriously”, Valcuha recalled. Later, he studied with two highly respected mentors, Ilya Musin at the St. Petersburg State Conservatory and Janos Furst at the Paris Conservatory of Music.

The soft-spoken Valcuha (pronounced your-I am worth-Selected-ah) first came to Houston to conduct the symphony as a guest in 2011, a few years into his tenure as head of the Turin, Italy-based Orchestra Sinfonica Nazionale della RAI. When he returned seven years later to conduct a program that included Richard Strauss’ Also Sprach Zarathustra, “I had a very strong feeling, a very strong musical connection with the orchestra,” he said.

“There was a mutual trust, which is very nice,” continued Valcuha. “When you trust the orchestra, when you can rely on the musicians (and) when they trust the conductor, you can let your imagination run free during concerts.”

Returning once again in March 2021 to conduct Beethoven and Copland, his warm feelings for the orchestra were reciprocated. “His expressions stood out, even behind a mask,” lead tympanist Leonardo Soto told the Violin Channel website. The organization was looking for a successor to Andrés Orozco-Estrada, musical director since the 2014-15 season, and Valcuha arrived at exactly the right time.

“Juraj stood out for his obvious chemistry with symphony musicians and his commitment to musical excellence,” said John Mangum, CEO of Houston Symphony, when announcing Valcuha’s appointment last July. “We know he will build on the work of music directors before him to support the highest level of performance imaginable for our musicians.”

Back in Jones Hall’s Green Room, Valcuha said he admires how the symphony has managed to successfully produce a series of weekly in-person concerts during the pandemic – making it one of the few orchestras in the world. world to do so – and is impressed by the traditions established by former musical directors such as Leopold Stokowski, Sir John Barbirolli, Andre Previn, Christoph Eschenbach and Orozco-Estrada. In fact, a series of concerts next season is an exact replica of a Barbirolli program from February 1966, featuring Tchaikovsky’s “Pathétique” symphony and Prokofiev’s Violin Concerto No. 1, with soloist Augustin Hadelich.

Houston to Naples and back

In all, Valcuha is expected to lead nine concert series in 2022-23. Several are back-to-back weekends, affording him a luxury many conductors are deprived of: downtime in his adopted city during the week. He wants to visit the Menil Collection, Rothko Chapel, and Space Center Houston (so far), as well as delve into Houston’s world-famous culinary scene.

“I’m looking forward to (using) this time to explore the city,” he said.

Until December, Valcuha is also musical director of the Teatro San Carlo in Naples. Choral programming forms a major part of the upcoming season, including the opening night performance of Verdi’s Requiem and the season-ending symphonic staging of Stravinsky’s rarely performed opera “Oedipus Rex.”

He enjoys conducting choral concerts because the voice can be so unpredictable: “One night it might be faster, one night you have to go slower; you have to listen carefully,” Valcuha said. “It gives you a kind of flexibility.”

Valcuha’s flexibility was on full display last weekend, during his first set of gigs as music director designate. He offered a first clue to the direction of the orchestra under his direction by pairing Beethoven’s Symphony No. the Ninth’s universal brotherhood message: “Elegy: A Cry From the Grave” by Atlanta-born composer Carlos Simon, written in 2015 and dedicated to Trayvon Martin, Eric Garner, Michael Brown “and others wrongfully murdered by oppressive power,” according to Simon’s program notes.

Under Valcuha’s baton, “Elegy” was fluid and desperate, its intensity rising and falling in waves before culminating in a single, discordant chord that left behind an unmistakable, if uneasy, sense of peace. But if Simon’s piece made a sharp retort to the Ninth’s boundless optimism and goodwill, Beethoven took some time in the latter to get there himself.

The dramatic opening movement was full of sharp dynamic contrasts, soft violin gasps quickly turning into a full swirl of brass and eardrums. The first few minutes felt like a warm-up exercise, breezy wind melodies escaping between energetic horn and string passages, dueling themes struggling to break through before falling into place virtually all at once.

On the podium, Valcuha led with fiery elegance, not wasting a single joule of energy. Keeping a prisonerless pace, his arms spread wide during the more lyrical interludes; at the stormiest moments his staff trembled with frantic frenzy. He listened intently and intently, tracing melodic contours with his left hand as he fanned the second movement into a great conflagration that sounded both like a roaring party and a runaway train, happily interrupted by a dynamic and charming mid-section. .

Soothing and docile, the third movement unfolds like a richly textured instrumental reverie. Tender melodies swirled back and forth from violins, flutes and clarinets, drifting in a meandering rhythm until a majestic brass snippet foreshadowed the finale, before the movement ended swaddling in harmonies that could tame wild dogs.

The finale immediately threw down the gauntlet in a flurry of wind and percussion, answered by long, winding statements in the low strings. Snippets of the previous three movements resurfaced before the famous melody “Ode to Joy” appeared, first on the cellos, before spreading throughout the orchestra. (During this section of last Saturday’s livestream, Valcuha’s eyes were visibly dancing with joy.)

The appearance of the four vocal soloists – first bass-baritone Mark S. Doss, then tenor Eric Cutler, and finally, soprano Meagan Miller and mezzo-soprano Sasha Cooke to form a scintillating quartet – ushered in the latest straight line, the orchestra and choir alternating between a dizzying array of moods: hushed and ethereal to bold and triumphant, a maze of interlocking parts all pulling in the same direction.

The ninth, and especially the last 10 minutes, has a knack for restoring faith in humanity, even when humanity really doesn’t deserve it. He certainly did it here. For Valcuha, the deafening applause and multiple curtain calls marked the sunrise on a tenure in Houston already full of promise and possibility.

“I only program music that I like to conduct,” Valcuha said days earlier, “so I’m going to enjoy it.”

Chris Gray is a Galveston-based writer.

5 Strategies to Build Resilience, According to a Doctor