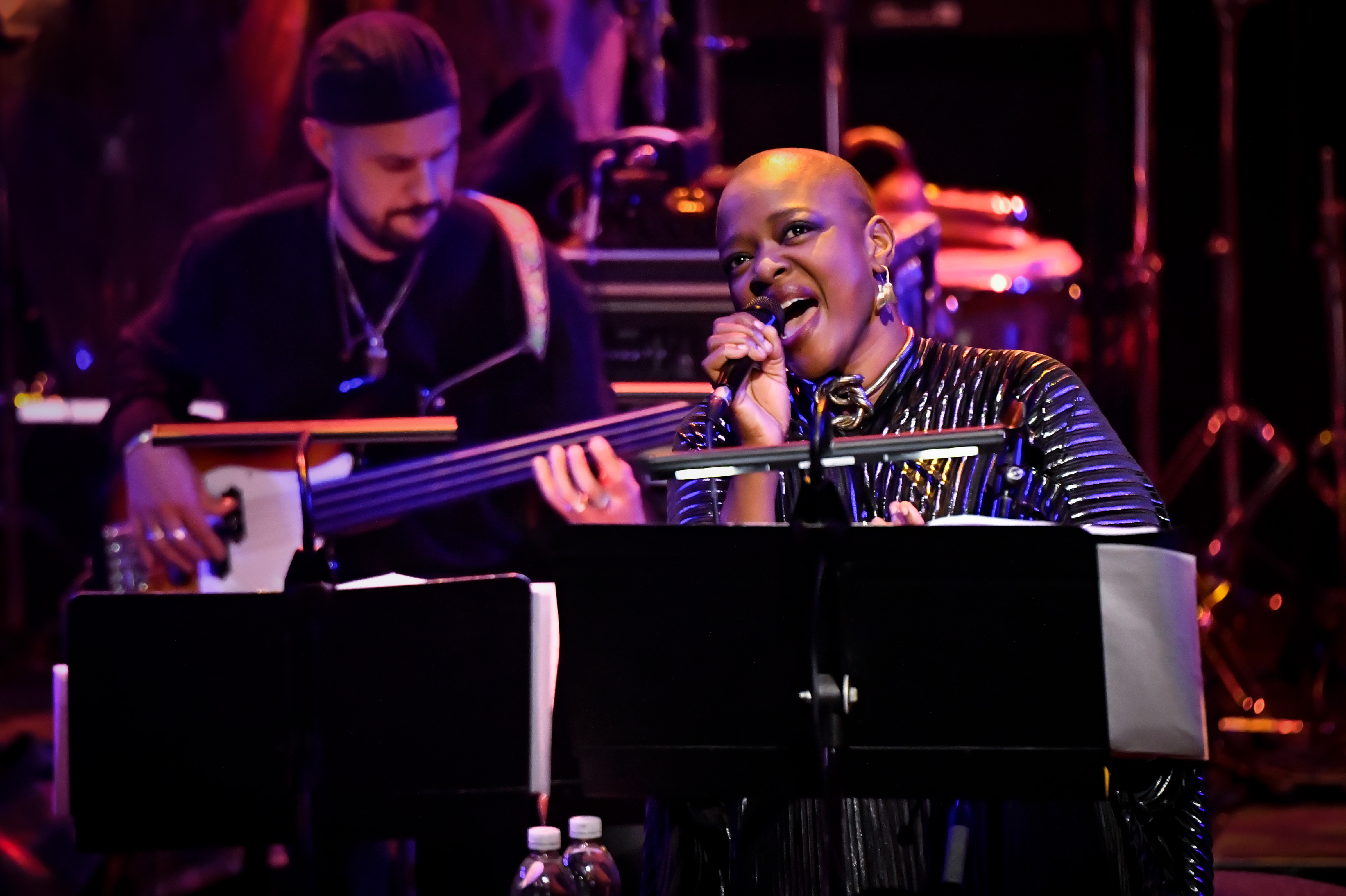 Not only does she have the necessary vocal range and control, but her own solo album sits at exactly the right intersection of folk, jazz and experimental songwriting to suggest she has the stylistic fluidity to pull it off. And she’s an amazing performer. She may have only made one album in 2015, but her work with everyone from Grace Jones to UNKLE to Tony Allen Matthew Herbert over many years has demonstrated that she is the one of the most powerful voices in the UK.

Nevertheless, there was some apprehension. The long history of bad jazz versions of “Both Sides Now” and “Case of You” leaves the gag reflex very over-sensitized when it comes to this kind of effort. And this show focuses entirely on material from Mitchell’s most esoteric period – the Hegira and Mingus scrapbooks. On the one hand, these are his most jazzy records, so they should lend themselves to interesting interpretation – but on the other hand, they are his most complex and tangled songwriting, which could all too easily invite an overindulgent formlessness. .

There were no instant answers as to which direction it would take. The show quieted down with a rather reserved introduction from musical director Peter Edwards, then the Nu Civilization Orchestra delivering an elegant instrumental version of “Chair in the Sky”, then Eska joining them for “Coyote”. So far so good, but it all played pretty straight: the intro felt like a deftly delivered opener, and “Coyote” was more or less a straight cover.

It was special: perhaps thanks to the images of her playing it on and off stage The last Waltz, ‘Coyote’ has always felt connected to Mitchell’s presence, and a certain ‘Seventies-ness’. So there was a bit of a disconnect between a black woman leading a modern British jazz ensemble and Mitchell’s autobiographical narrative of her time. Or there was at the beginning, anyway. Eska and the orchestra warmed up as they went, then right at the end there was a moment.

As Eska sang “this flame you put here in this popsicle”, there was a distinct glint in her eyes: the clearest possible recognition that she was fully aware of all the layers of meaning and irony in taking on the personality of an aloof Norwegian. Canadian who had shamelessly appropriated jazz and elements of black American identity as part of her eternal flight from Prairie Protestant conservatism. And she had a lot of fun with it.

From that point on, there was no doubt that this wasn’t a set of straight covers, and there was barely room to breathe between jaw-dropping musical moments. Eska’s scatting hooked with inhuman precision to bass and bongos on “The Dry Cleaner From Des Moines.” Her facial expressions alone bring the poetry of “Hejira” – “Each so deep and shallow / Between the forceps and the stone” to life. The total funk in the interjections of “oh yeah” and “ahahaha” in “Furry Sings the Blues”.

“The Wolf Who Lives in Lindsey” was made even more mind-blowing by Tello Morgado’s caressed and shaken percussionAnd not a second of the arrangements or the playing was wasted either. The way “Refuge” fell down to the string section, then reformed piece by piece. Giorgio Serci’s guitar finds the right tone for everything from liquid ballad to abstract skronk to heartfelt country twang on a devastating “Amelia.” Jihad Imroel-Quays Darwish courageously takes over the role of Jaco Pastorius on bass, without simply imitating Jaco. Eska herself casually controlling amazing electronic processing over her own voice, playing tricks where you’d start to wonder what’s digital and what her own vocal control is.

The apocalyptic dreams of “The Wolf That Lives in Lindsey” were made even more mind-blowing by Tello Morgado’s caressed, shaky percussion that seemed free-form but again felt locked in with each inhalation of Eska. And it continued, through an effortlessly funky finale of “Black Crow” and an encore of “God Must be a Boogie Man” with Edwards – by then having revealed his reserve as hiding a powerful dry spirit – drawing the audience into the ritual. And there was so much more. Not one of the 19 people on stage failed to make a vital contribution, not a single note was wasted, it was extraordinary.

Science fiction writer William Gibson famously remarked that “the future is already here, it’s just unevenly distributed.” And some music demonstrates this principle as powerfully as anything else. Charles Mingus’ music, even from the 1950s, contains such concentrated doses of the future that it can still sound like alien technology today – and Mitchell in the 1970s managed to tap into his source of inspiration and connect even further into the future. And Eska – dressed like a sci-fi priestess in a different black and reflective couture outfit for each half of the show – took that stick and ran with it, as did all parts of the aptly named Nu Civilization Orchestra. Exceeding all expectations, it made Mingus and Mitchell’s visions as vivid as they’ve ever been and as breathtakingly advanced. An incredible experience. If you have the chance to see this, don’t miss it.