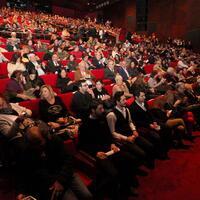 Number of cinemas, audiences down in Turkey

According to the country’s official data institute, the number of cinema halls fell from some 2,698 to some 2,398 in one year across Turkey.

“During this period, the number of seats in cinemas decreased by 10.3% and was around 285,130,” TÜİK said on June 14 in a “Cinema and Performing Arts Statistics” report.

The number of film viewers was around 12.4 million in 2021, of which 9.2 million watched foreign productions.

The number of those who watch Turkish films has fallen sharply, from 13.3 million to 3.3 million in one year.

The data showed how the coronavirus pandemic has impacted Turkey’s film sector.

The sharp decline can also be seen in the number of theaters and audiences.

In Turkey, opera and ballet performances affiliated with the General Directorate of Opera and Ballet were presented in six provinces during the 2020-21 season.

There were six orchestras, 13 choirs and nine groups affiliated with the General Directorate of Fine Arts in 2021.

The number of spectators in the orchestra, choir and groups was approximately 72,277, with a decrease of 54.8%.

“The effect of the COVID-19 pandemic process experienced in 2020-2021 was seen in the statistics of cinema and the performing arts,” the institute summarized.

Beyond Black and Yellow: How Opera Can Fight Prejudice | Opera