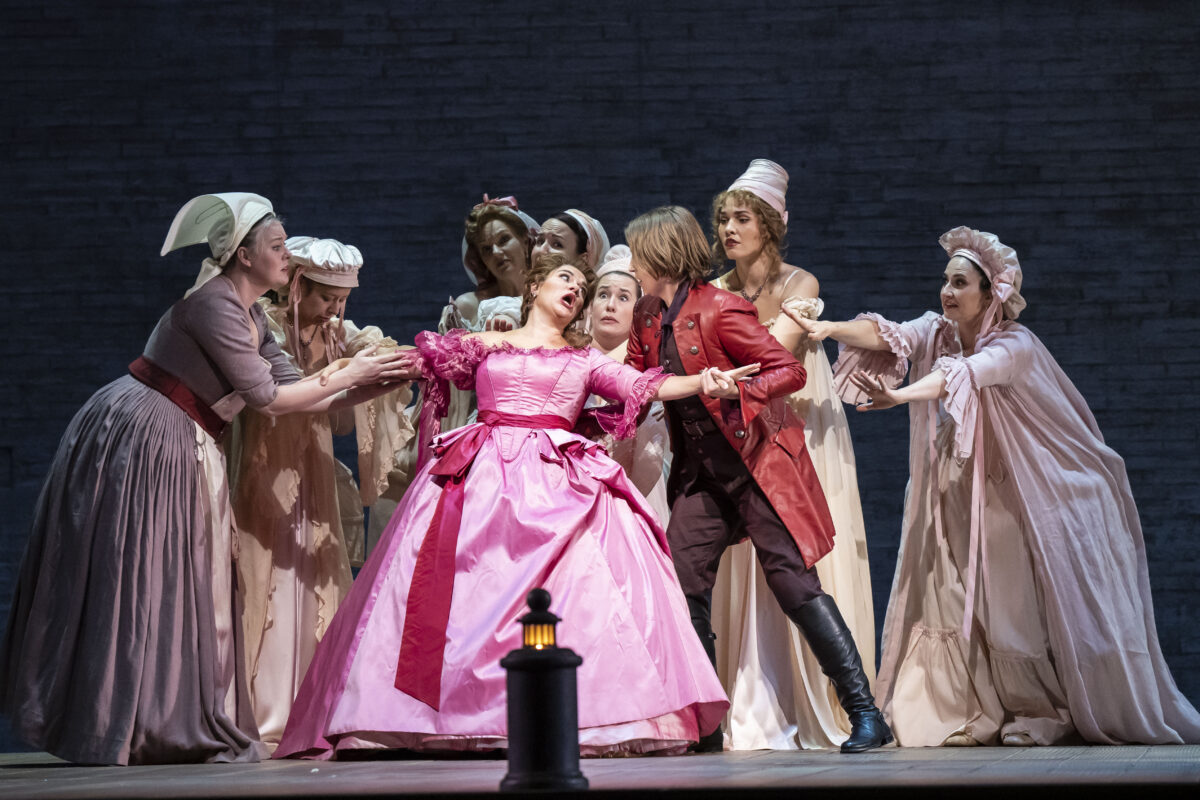 CHICAGO—The majority of great operas are tragedies, with many of their main characters ending up dead at the end of the curtain. Thus, when an opera makes people laugh and all the characters are still alive when the finale arrives, it leaves a welcoming feeling of well-being. Such is the entertaining case with “Le Comte Ory”, which is currently playing at the Lyric Opera of Chicago.

Gioachino Rossini’s opera is not as well known as his “The Barber of Seville” or his “William Tell Overture” (with its opening theme for film, radio and TV shows featuring The Lone Tidy). But it’s as much a light-hearted romp as any of the other works the composer often produced.

On a libretto by Eugène Scribe and Charles-Gaspard Delestre-Poirson, the story of the vigorous and bawdy Le Comte is supposed to take place in the 12th century when a troop of soldiers takes off to fight the Crusades, leaving their girlfriends, wives , and sisters behind. Womanizer Count Ory, who decides fighting the infidels isn’t in his best interests, stays home and embarks on a more personal and seductive battle.

The Count’s page, Isolier, is in love with the Countess Adèle and confesses to Ory his plan to court her. Ory appreciates the idea, but for himself. For the sake of seduction, he seizes the opportunity to seduce the beautiful and pure Countess Adèle. To do this, he must enter her castle disguising his identity: he does this by posing as a holy man offering spiritual and romantic advice to the women of the court, as well as posing as a nun. This whole crazy pretense is a riotous boo that leads to a lot of ridiculous and hilarious shenanigans.

The opera premiered in Paris in 1828, which means the jokes about transgender identities and sexual antics wouldn’t be questioned in its time, but don’t pass on to ours. Indeed, from some points of view, the opera should be attacked and perhaps closed. But director Bartlett Sher has found an imaginative way to overcome this politically charged problem by staging an opera within the opera. Sher’s intriguing concept is now being used by director Kathleen Smith Belcher for Lyric’s “The Count” production.

Instead of just taking center stage, the action takes place on a theatrical wooden plank platform, which set designer Michael Yeargan has embellished with pulleys, wheels, ramps and a fairytale castle. old fashioned fairies. This setting gives the impression that the opera is being performed in an earlier era rather than a more modern time.

What makes “The Count” a particularly engaging presentation, however, are its enchanting interpretations by a very talented ensemble that includes Lawrence Brownlee who not only commands the opera with a rich, velvety tenor as Count Ory, but who sings Rossini’s razor, rapid notes with irresistible ardour. Plus, Kayleigh Decker delivers a crystal-clear mezzo-soprano performance as Isolier, Ory’s page, as well as charming physicality with slapstick comedy.

The highlight of the performances, however, is that of golden-voiced soprano Kathryn Lewek, who not only delivers delightful vocalizations but also exhibits terrific comedic timing in her portrayal of the titled and demanding Adele.

As always, musical director Enrique Mazzola does an excellent job leading the exemplary lyric orchestra, and the lyric choir, under the direction of choirmaster Michael Black, translates into robust antics that add to the hysterical humor. of the opera.

The only hiccup in this exuberant, laugh-filled operatic gem is designer Catherine Zuber’s costume. The opera is supposed to be set in the 12th century, but the dress, except for the knights who only show up at the end of the production, seems to be the dress of a more modern century. That said, the costumes are plush and beautiful, and they don’t get in the way of the exuberant fun of the job.

While “Le Comte Ory” was written by Rossini at the end of his spectacular career (his 38th out of 39 lyrical works), its sparkling and effervescent music imposes itself as a sparkling delight, all the more appreciated for its uplifting sound. , energetic and cheerful melodies are a contrasting tonic for today’s trying times.

As an arts writer and film/theater/opera critic, Betty Mohr has been published in the Chicago Sun-Times, Chicago Tribune, Australian, Dramatist, SouthtownStar, Post Tribune, Herald News, Globe and Mail in Toronto and other publications.