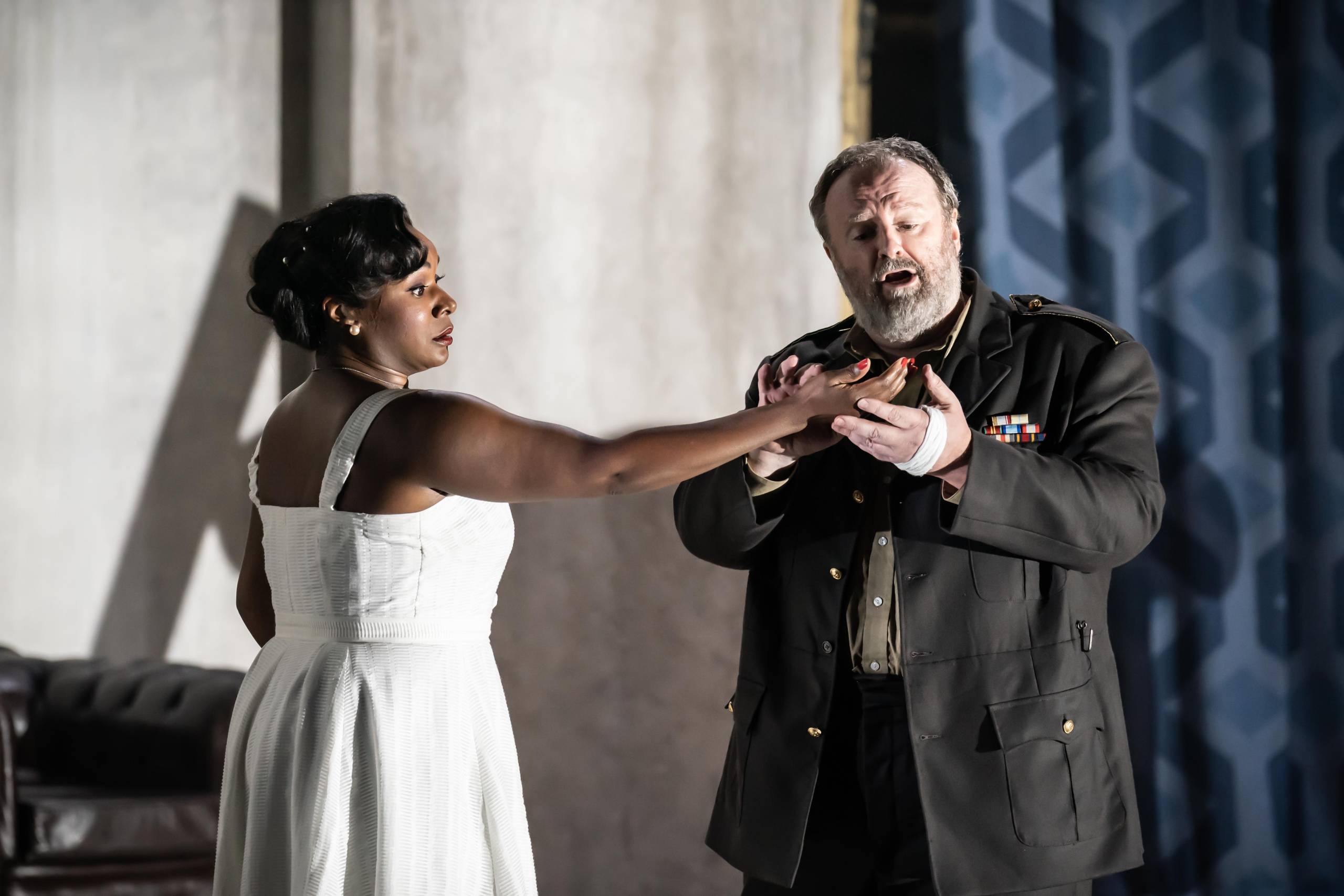 At the Grange Park Opera, the great Simon Keenlyside (picture below) repeatedly threatened to overwhelm David Alden’s new production: a dominance rubbed off by his silent, watchful presence at the edges of the stage, even when he had no words to sing. That this bluffing, leather-clad baritone wrecker didn’t entirely get away with the evening owes much to Elizabeth Llewellyn’s rich, radiant Desdemona and terrific ensemble work. While Gwyn Hughes Jones’ heartfelt and poignant Otello sometimes seemed eclipsed in his own drama, he wasn’t the first or last Venetian Moor to meet that fate in a plot where gullibility sinks dignity.

It may be a colorblind cast, but the thrill of a white Otello turning his paranoid, murderous rage on a falsely accused black spouse inevitably changed the power dynamics of the play. Dressed in holy white against a set (designed by Charlie Edwards) that mixed Catholic imagery with mid-century wartime uniforms and starchy ceremonial dress, Desdemona became doomed prey to all manner of scurrilous injustice. . Thanks to Llewellyn’s warm, huge, creamy soprano, she never looked like a shy, feminine victim of hate and slander. Plagued by rumors of betrayal and disloyalty, public and private, Alden’s Cyprus has become a semicircular circle of fear: a stifling arena where truth, rumor and lies collide. A sign proclaiming “Constantia” (a Roman city on the island, here with symbolically wonky letters) hung above the soldiers’ cafe. Gabrielle Dalton’s Forties costumes blend notes from Mussolini’s Fascist Italy and the island’s British colonial past. In this testosterone-fueled militaristic world, the warm, joking men strut and plot while the women have only the restrained movement embodied in the skintight pastel suit sported by Olivia Ray’s Emilia. Only, in the first act, a solitary dancer dressed in black – Arianne Morgan – among the officers in uniform can leap to freedom (Lynne Hockney imagined the striking choreography).

Alden enriches his version with a few fine strategic touches: especially the ubiquitous giant shadows projected by the singers (Tim Mitchell designed the excellent lighting). They remind us that in otello, fantasy and illusion twist reality into distorted shapes; the mental specters engendered by insecurity overshadow the truth. A few of Alden’s choices could be extremely intrusive: like the fire on stage that flickers, burns, or dies, often at Iago’s behest. Although rooted in both text and score, the Desdemona-as-Madonna motif seemed slightly exaggerated, especially when an image of the Virgin became a dart board for the wicked in their plot against virtue. And I don’t see why, as lethal and suicide weapons, guns should replace pillows and daggers, even in modern clothing decor. 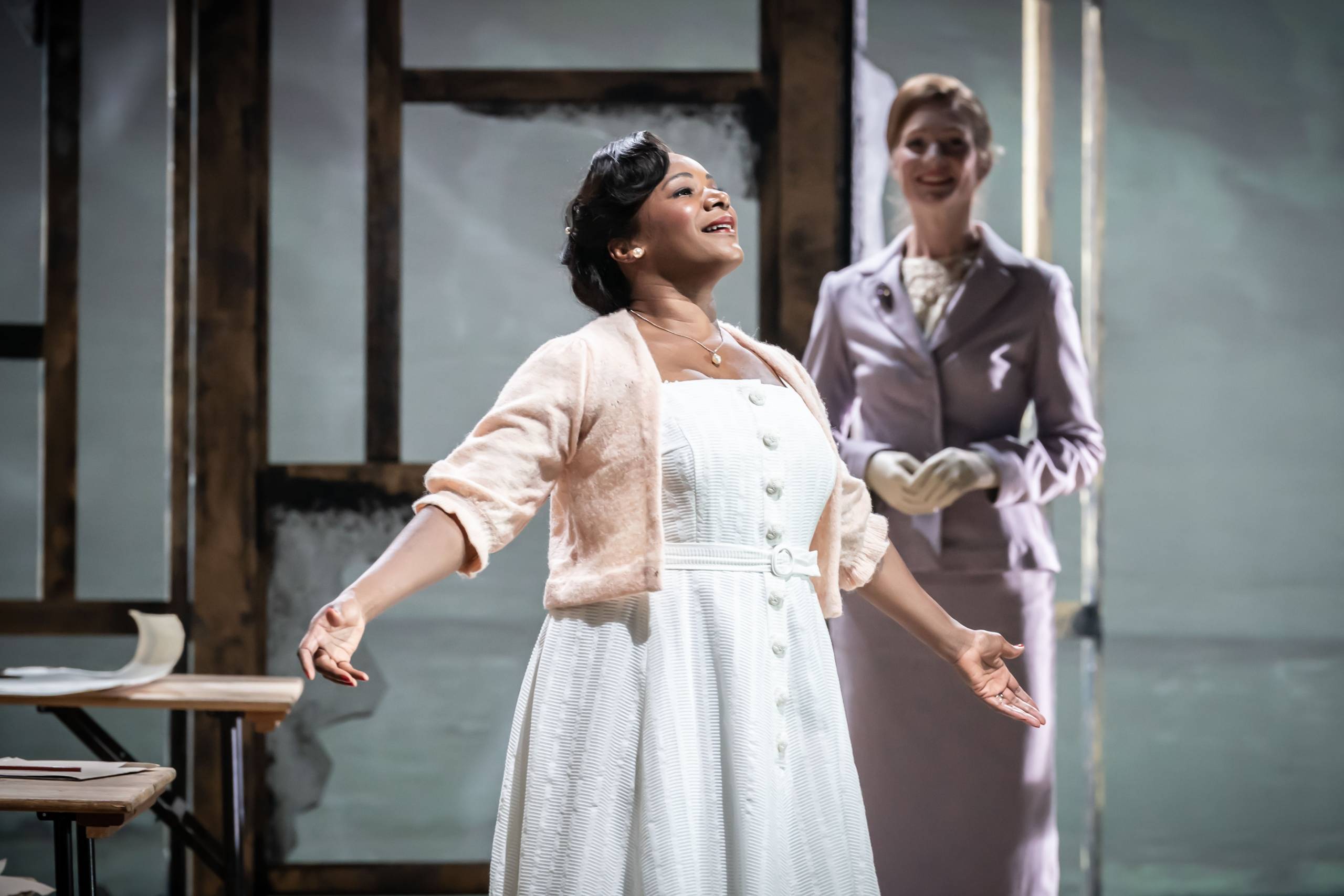 Yet little detracted from Llewellyn’s embrace of the role: perhaps strained at the top at first, and poised on vibrato with an overly lavish, but soon to be brilliant hand in the transcendent duet “Gia della notte dense” with Othello. In the second half, Llewellyn (picture above) glows and even burns. With a soul-scorching Willow Song and Ave Maria, she managed to thin out that usually luscious, smoky, velvety sound into a clear, pure beam of innocent grief. The spectrum of feeling and intonation of his “Salces” delivered a dramatic soprano masterclass in itself. As Otello arrived to complete his mad design, his angelic top notes hovered heartbreakingly in an abyss of pain.

“Honest” Iago should sound as open and transparent as Otello considers it to be, and Keenlyside projected that insinuating authority from its opening notes. He played the audience like he did the casting, a magnet to the eyes as well as the ears as he lurked on the fringes of the action when he wasn’t directing it. Given the charismatic and muscular assurance of almost every line he sings, the solo and unShakespearian profession of faith in evil and nothingness given to him by Verdi’s librettist Boito – “Credo in un Dio rawl” – can sound like melodramatic excess. Here, his Nietzschean nihilism had a tinge of anguish as well as jubilation. You felt the pain behind the contempt. 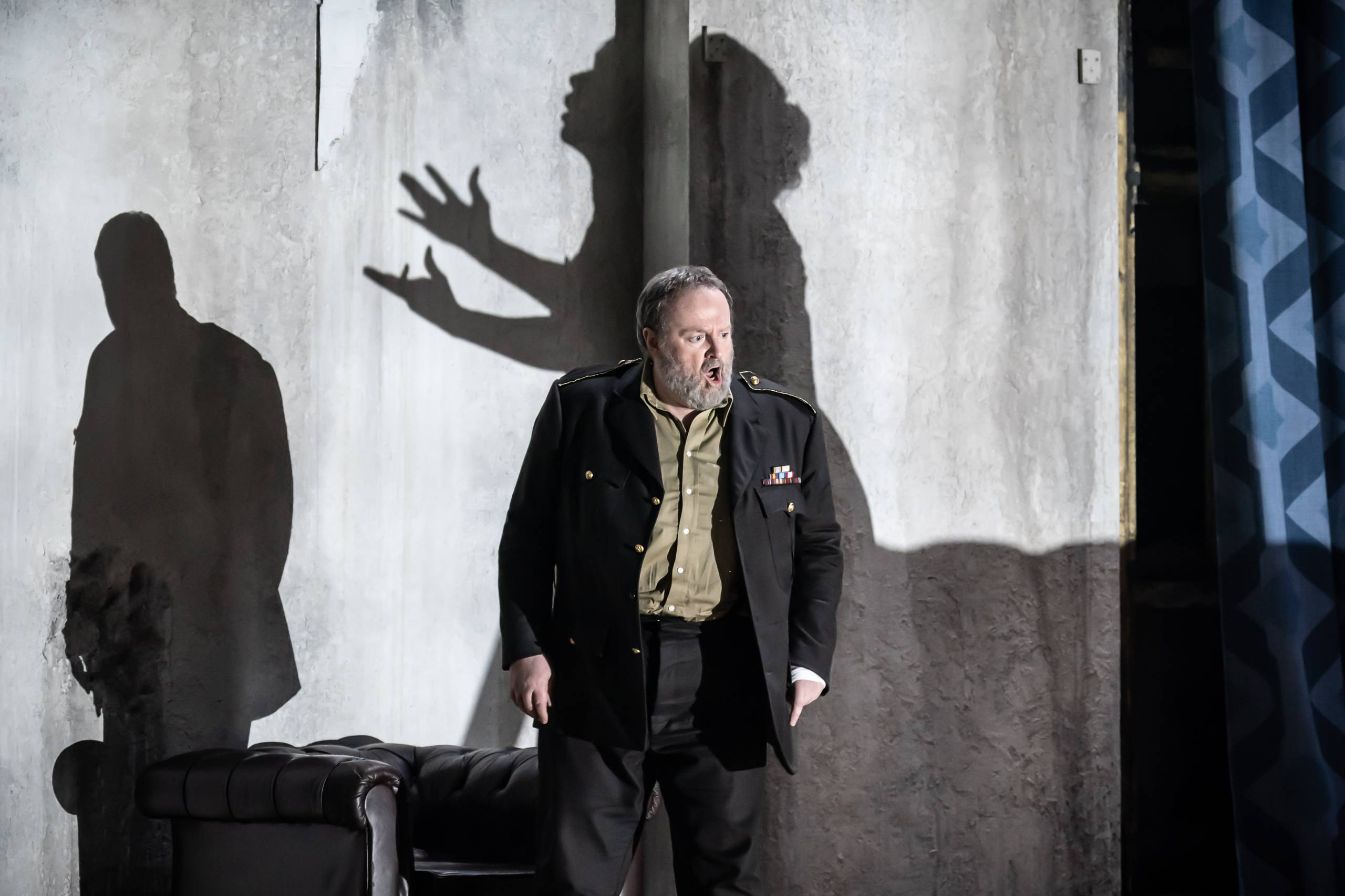 Like Otello, Hughes Jones (picture above) commanded a plump, fruity, brilliant tone that suited his passages of tenderness more than his outbursts of jealous fury. I believed in his love more than his rage, even though his farewell sequences – “Or e per semper addio” – hovered and touched. And his last “Un bacio ancora” confirms that this voice can reach a tragic tenderness. Inevitably, Iago took the lead in the terrifying revenge duo that closes Act II, though I felt here bandleader Gianluca Marcianò – a Grange Park favorite – could have tightened the focus and speeded up the pace as we gallop headlong into hell. 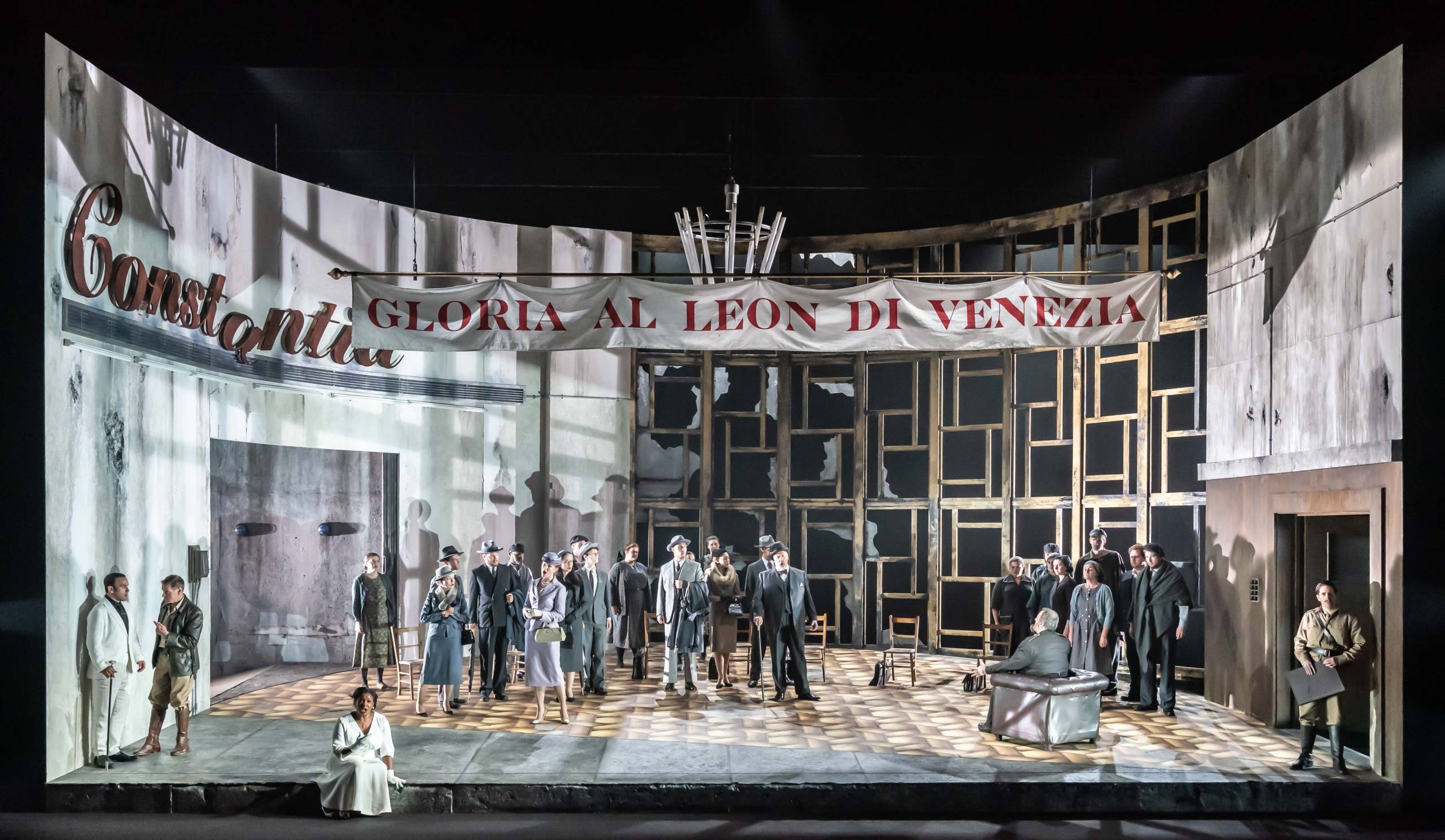 Elsewhere, from the electrifying opening storm to the suspenseful cinematic score before Desdemona’s murder, he drove the action with dramatic balance, precision and flexibility. Marcianò drew splendid tonalities and shattering climaxes from the Orchester de Gascoigne (formerly the Garsington Opera Orchestra, renamed in honor of the late patron and champion of Grange Park, Bamber Gascoigne). The individual instrumental parts – trumpets, cellos, harp – made crucial and well-accented contributions.

The minor roles had no weak links, with Olivia Ray at first vivacious, then deeply touching, Emilia, Elgan Llyr Thomas, an elegant, even sympathetic Cassio, and Anthony Flaum in a white suit, a presumably dandy but still pathetic Roderigo. . The estimable Matthew Brook ruled St. Mark’s as a spooky Venetian ambassador. Although otello shrinks into a chamber piece for its three main deceivers or deceivers, the political dimension matters: care and flair, enhanced by the well-pierced and hard-hitting chorus. By contrast, the ending came in a bare space with pistol shots next to a virginal bed: an eerie, sacrificial austerity undone by the warmth and color of the voices around it – that of Desdemona above all. .