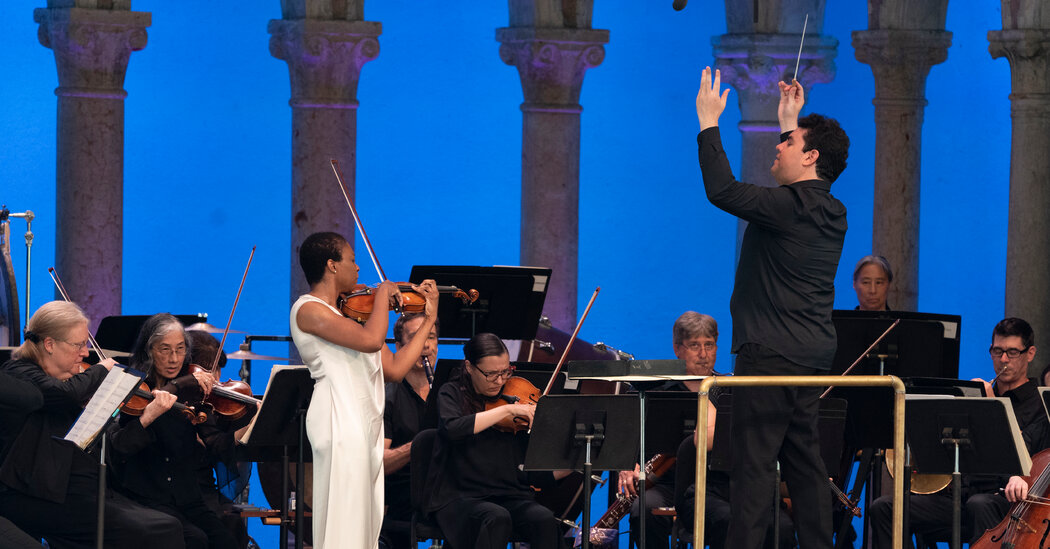 Review: In Caramoor, a concert announces the return and the memory

KATONAH, NY – Before a St. Luke’s Orchestra concert on a scorching Sunday afternoon here at the Caramoor Center for Music and the Arts, a jubilant James Roe, executive director of the ensemble, told the audience that these musicians had not presented a live performance in person for 472 days.

This return meant more than just visiting a Caramoor game. In recent months, I have attended orchestral concerts in New York. But these events played out in front of a very limited audience wearing masks. At Caramoor, the capacity was not limited to around 150 people. Almost none of the 400 people present wore a mask (only the unvaccinated were asked to do so).

It was like a real return to normal for classical music.

With its bucolic park and its open-air Venetian theater, where most of the programs are presented, Caramoor is an ideal place for summer concerts, especially in this still difficult period. And he has planned an adventurous summer season, which will run until August 8. This program of the Orchester de Saint-Luc was conducted by Tito MuÃ±oz, the Queens-born musical director of the Phoenix Symphony, and offered works that addressed the major social issues of the past year.

The afternoon started with the premiere of Valerie Coleman “Fanfare for unusual times”. The idea for the article, as Coleman recently explained in a video interview on the Caramoor website, came from Roe, who invited her to write an article that not only tackled the pandemic, but the tumultuous “political landscape”, as she put it. .

Yet above every American composer who writes a marching band, Coleman said, is Aaron Copland’s iconic “Fanfare for the Common Man” of 1942. In an inspired idea, this 75-minute program, after having opened with Coleman’s fanfare, ended with Copland’s, and featured, in the middle, Joan Tower’s brave “Fanfare for the Uncommon Woman” (1987). In a nod to Copland and Tower, Coleman also composed his piece for brass and percussion.

Yet while writing something that offered an affirmation to people emerging from an unimaginable “unusual time”, Coleman said, as a black woman, she wanted to “bring the black experience,” “turbulence, upheaval.” , the complexity of recent conversations about racing in America.

These threads – and the emotions associated with them – come through vividly in Coleman’s six-minute play. It does not begin with a typical fanfare salute, but with an interrogative and sought-after line for the solo trombone which is soon muted by tangy and sweet brass chords. The hustle and bustle in the midst of determination comes alive as the music transforms into hectic episodes for the percussion. The mood seems both thoughtful and hectic, uplifting and threatening. The elements of the Black experience during a difficult time that Coleman described is manifested in a vivid passage with riffs for mallet percussion instruments, dance notes and bursts of anxious frenzy. At the end, with bursts of four-note brass motifs, echoes of coplandish affirmation arise, but also a breathless burst that is both invigorating and stimulating.

It made a surprisingly good contrast to follow the Coleman with Ralph Vaughan Williams’ “The Lark Ascending”, a “romance”, as the composer described it, for violin and orchestra, with the superb Tai Murray as a soloist. This radiant, pastoral and somewhat bittersweet piece is hugely popular, but it doesn’t appear as often as it should in concerts. Murray’s playing is full of radiant sounds, lyricism and delicacy. During the times when the violin writing becomes complex with evocations of floating birds, she expedited the passage with effortless grace.

The short and spirited “Fanfare for the Uncommon Woman”, dedicated to pioneering conductor Marin Alsop, outgoing director of the Baltimore Symphony Orchestra, is the first in a series of six such brass bands she has performed. written. This short but packed and muscular piece is like a respectful cue to Copland.

MuÃ±oz then directed an elegant retelling of Copland’s â€œAppalachian Springâ€ sequel, capturing the melancholy of the music while letting the players run wild in dancing and almost frenetic episodes. And the Copland fanfare that day proved the fitting conclusion: a way to usher in a moment that signals a comeback in more ways than one.

The festival continues through August 8 in Katonah, NY; caramoor.org.