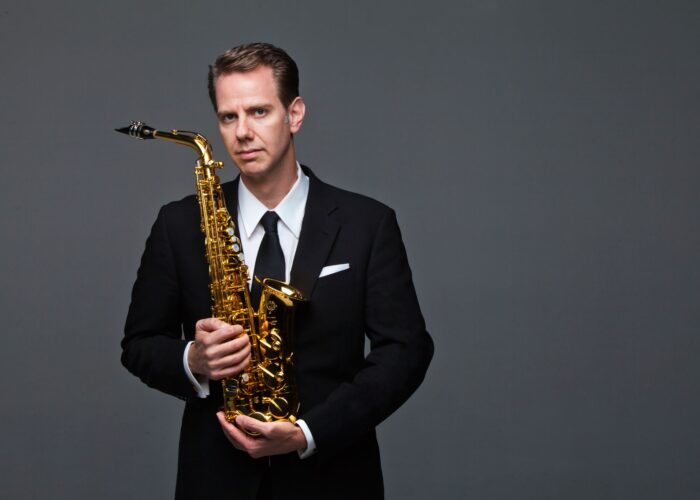 The saxophone is a ubiquitous musical instrument, but only in certain contexts. Jazz, of course, as well as rock and pop.

Classical music? Not really. There have been a number of concertos written for the instrument since its creation in the 1840s by Belgian inventor Adolphe Sax, and there are some well-known solos in the standard orchestral repertoire.

But the classical saxophone is still an underrepresented musical vein. Timothy McAllister is working to change that.

The American virtuoso has introduced dozens of new works to the saxophone repertoire over the decades, including concertos by John Adams, Jennifer Higdon and John Mackey. This week he joins the San Francisco Symphony Orchestra for the world premiere of John Corigliano’s “Triathlon,” a three-movement commissioned concerto that asks the soloist to play three different forms of the instrument: soprano, alto and baritone.

McAllister spoke to The Chronicle by phone from his home in Ann Arbor, Michigan, where he teaches at the University of Michigan.

A: It was literally physical training. The title of the piece is linked to the vision of John as an athletic achievement, and there was as much physical preparation as musical. I think I lost 20 pounds off my top pandemic weight.

Q: You have been involved in commissioning and creating so many pieces for saxophone, both solo and chamber music. Do you think it is imperative to help flesh out a repertoire that is still relatively thin compared to writing for, say, violin or clarinet?

A: The ultimate goal of saxophonists is to attract the attention of a composer like Pulitzer Prize-winning and Grammy-winning John Corigliano. We are hungry. We’re desperate to make sure characters like him don’t pass before we can get some sort of piece of them.

Q: But solo work is only part of it. There is also the question of the use of the saxophone as a member of a symphony orchestra.

A: Saxophonists can only exist when a composer like Adams, Corigliano or Joan Tower enforces his will and says, “I want a saxophone in this instrumentation.” Because there will always be negative reactions from traditionalists who will say: “No, the standard orchestral instrumentation is what it is”.

Q: So how did the saxophone become so separate from the classical world?

A: The original intention was always for the instrument to be part of the symphony orchestra. He was considered a crucial bridge between woodwinds and brass.

But we have to recognize how crucial it became as a jazz instrument, eventually replacing the clarinet in the New Orleans-style jazz band. And classical musicians are proud of this history of the instrument. But at the same time, we continued to defend Adolphe Sax’s original idea.

Q: Does it help ensure that the classical world has more saxophone virtuosos like you to maintain that style?

A: I am part of a generation of professors and teachers who have tried to raise awareness and also to train students to a point where they are at the level of the great clarinettists and violinists coming out of the Colburn School (in Los Angeles) or Curtis Institute (from Music by Philadelphia Cream).

Q: When you partner with a composer like Corigliano or Adams, how much do you educate them in the intricacies of the instrument, and how much do you just take their ideas and work with them?

A: It kinda goes both ways. Some composers come to the instrument with zero experience and no knowledge, and there are others who know it very well.

Corigliano used the saxophone in some of his other music. There’s a movement in his Third Symphony where a saxophone quartet is used to represent the Sirens of Greek mythology, and it’s incredibly beautiful and haunting.

Q: So you didn’t have to tell him about the capabilities of the instrument?

A: In this case, I flew to see him at his house in New York with my instruments, and he literally wanted me to show him stuff: “Play that, try that. He would show me sketches and make me read them just to see how they sounded.

Q: Looks like you’re ready to add the new concerto to the repertoire.

A: It’s just such an honor to perform this piece. You know, when I was coming out of my doctorate, a committee member asked me, “If money weren’t an issue, who would you order saxophone music from?” Of course, they were just testing me on general trends and names of composers and so on.

I said, “John Adams and John Corigliano.” And that was 20 years ago. Today, I feel like I’m living a dream.

For soprano Ailyn Perez, a starring operatic role and a surprise proposal