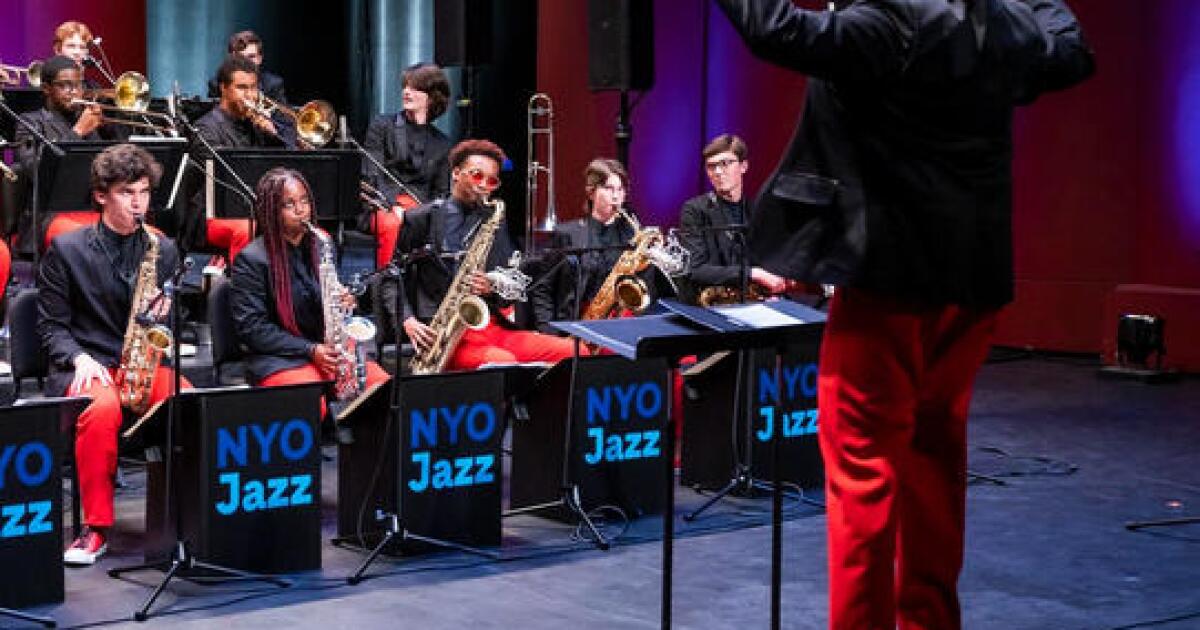 Michael Jewett: Friday night in Detroit, the NYO National Youth Orchestra of Carnegie Hall is in Detroit at the Fisher Center for, well, their first performance in our area. And to tell us all about the ensemble, the trumpeter and musical director of the NYO, trumpeter Sean Jones. Welcome to our region. In fact, it’s been a while since you’ve been here.

Sean Jones: Oh my God. It’s great to be back and thank you so much for having me. I’m excited.

Michael Jewett: Yeah, I have to say the record is out. It’s called “We’re Still Here” by NYO Jazz, National Youth Orchestra Jazz. And I saw the song and everything, and I was grooving and grooving, and I was like, “Oh, that’s when I heard about this set.” The members of the ensemble are all young student musicians. Maybe I shouldn’t say young, but it’s between 16 and 19 years old. Can you give us kind of a simple introduction, what is the NYO and who is it for and what is it about?

Sean Jones: Well, you’re absolutely right to say young. Yes, they are young. They are young people aged 16 to 19 chosen from all over the country. We begin the selection process with NYO, in fact about six months in advance. We have a program at Carnegie Hall called the National Youth Orchestra, and it started with the selection of nearly 100 young people who will hit the road from various parts of the world to become ambassadors of the United States. And we started with the orchestra component, and they did an amazing job. It was so popular ten years ago, which is when it started, that we had to add another element and we were also NYO. Well, my long-time colleague Joanna Massey approached the folks at Carnegie Hall and said, “Hey, we have two orchestras. We are in the United States. I think we need a big band. And they said, “You know what, you’re absolutely right. And when they decided to add the big band component to it. They called me and they were like, “Hey, Sean, would you like to direct it?” And I said, “Of course I would.” And here I am five years later with the novel. And, again, we choose from several hundred people, we choose to continue to go on the road to represent not only the best sounds that our young people have to offer, but also the best leadership and the best representation of what our young people who go here to this country. So we are delighted. When you hear this big band play, you’re not going to think it’s a high school band, are you? You sound like the Basie Band, the jazz orchestra, all that. Yeah, like everyone.

Michael Jewett: In effect. And that’s what I said. You know, I, you know, I’m like, “Oh, Sean Jones.” So I throw on the record, I groove on it. And I realize, “Wait a minute. These are…” You know, I hate being like the ageist or whatever. It’s kids playing, but they’re really…it’s a great, great big band orchestral jazz project. The disc is called “We’re Still Here”. New York Jazz. And then the word, of course, jazz. This set with artistic director Sean Jones Friday Night in Detroit at the Fisher Music Center makes its debut in our region. The ensemble is also accompanied by a special guest, the magnificent singer Jazzmeia Horn. In short, one hell of a musical evening. Jazzmeia Horn is in her early thirties. You are in your mid-forties. Both of you are kind of like that generation of jazz artists who benefited from jazz education programs, probably quite early in your life and career. So how does it feel to be kind of like that next level? You left someone whose life was enriched by, you know, jazz education or had that opportunity. And now you’re like, give back. You’re, like, in the middle of it. You convey that in this really high-profile setting. This is going to be a great thing for you personally.

Sean Jones: Oh, that’s amazing. It’s really wrapped up, man. When I started at the age of 16, I wanted to be in education, and I didn’t expect to be on the road as much as I was on the road in my career. But the road somehow seduced me. But education has always been the focus, as has performance. And so, being able to pay it forward, pass the torch, put the torch on to be a link in the chain of humanity is a beautiful calling my whole life, man, and I’m just thrilled to do it, frankly, at such a high level with such incredible young people. I’m excited.

Michael Jewett: Yeah, indeed. How would you rate the disc? We’re still there as kind of an introduction to what, you know, what someone might experience at the gig. You know, just on the disc there is original music. There are compositions by contemporary artists. Wycliffe Gordon. Miguel Zeno. There are classic things. You score extra points by playing the music of the late Ralph Peterson, the much-missed Ralph Peterson. There is some original music. There’s some Neal Hefti stuff here. A bit of El Antonia. Is there something the band members are doing that they’re more excited about, you know, more classic stuff or they like the challenge of playing contemporary stuff? Are there things they like to dig a little deeper into?

Sean Jones: Of course, they swallow everything. I kind of preach that message everywhere I go. And that message is that the orchestral format of the United States is big band jazz. This is our big group.

Sean Jones: There is no ensemble more equipped to cover the depth and breadth of American music than the big band.

Sean Jones: So we cover everything. We cover R&B, gospel, jazz, some classical stuff, extended compositions, chamber ensemble format. Because the big band is a chamber ensemble. We cover it all, and they really gobble up because they’re diverse. They listen to a lot of different things. They’re not just a crafty pony. So I would say, you know, in response to your question, the balance sheet represents what we do best in the United States, and we’re diverse. This is the secret of our sustenance. We can do a lot of things, and that’s represented on this album.

Michael Jewett: And it’s just, I mean, you’re there playing a wide, wide variety of music from contemporary performers and a wide variety of classic stuff. Well, congratulations. Glad to have you. New York Jazz. The disc is now out. “We’re Still Here” as the title of the disc. The NYO Jazz Ensemble. Friday night at the Fisher Music Center in Detroit, led by our guest trumpeter, bandleader, composer Sean Jones and also featuring the magnificent vocalists Jazzmeia Horn in a special role, I’m sure, very, very special. Congratulations on that and thank you. And keep doing what you’re doing. We can’t wait to hear the show this Friday. And the next time you’re around, I’ll bring your own stuff. It’s always a pleasure to talk to you. Sean Jones, thank you very much.

Sean Jones: Thank you my friend. And lots of love to you.

Fact-based, non-commercial reporting is made possible through your financial support. Donate to WEMU today to ensure the prosperity of your community NPR station.

Is digital lending a boon or a curse to customers?