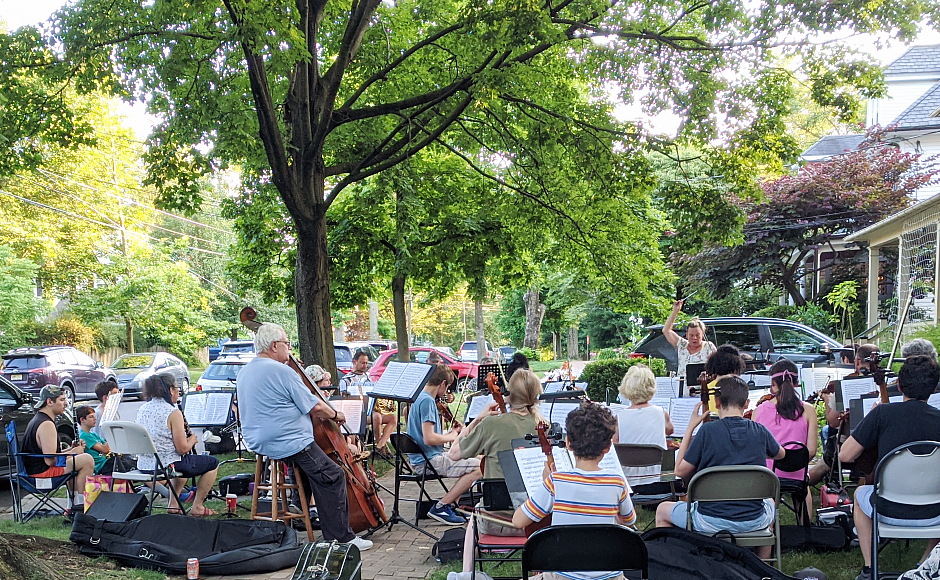 When pandemic safety precautions forced the South Jersey Youth Orchestra to leave their traditional home at a church in Bellmawr, director Amy Patton Wessecker brought the group to her mother’s Haddonfield lawn to rehearse.

It’s pretty much sunset on a humid June evening in Haddonfield, and at the corner of West End and West Euclid avenues, orchestral music begins to fill the air.

For passers-by it’s an unexpected accompaniment to the typical twilight hours, but in the neighborhood it has become a familiar backdrop throughout the past year.

What is less common is the source of the sounds: the South Jersey Youth Orchestra and friends, an ensemble of 40 musicians from towns as far apart as Mount Laurel and Williamstown, and as close as Haddon Township and Audubon.

In preparation for its summer concerts, the group repeats the first and fourth movements of Brahms’ First Symphony in C minor, string arrangements of “Fantasy on Simple Gifts” by Robert Kerr and selections from Rossini “Barber of Seville.”

Nestled on the lawn of violinist Lenora Patton, whose daughter Amy Patton Wessecker guides them through the changes, the orchestra has continued in this way since May 2020, driven out by the pandemic of the new coronavirus (COVID-19).

The idea of â€‹â€‹roaming the air outside the family home arose out of necessity, Wessecker said, after the group was no longer able to safely reunite at the Emmanuel Presbyterian Orthodox Church in Bellmawr, which has been her home for 30 years.

One of the first options, an orchestra member’s family barn in Woodstown, was ideal for performances, but a bit too far away for twice-weekly rehearsals. The second best thing was the Patton House in Haddonfield. 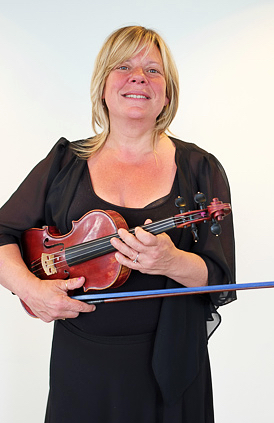 â€œWe realized pretty early on that people wanted to keep going, but couldn’t get to the farm all the time,â€ Wessecker said.

â€œMy mother is 90 years old, that’s one of the reasons we decided to bring her some. She sits on the porch and plays the viola with us.

The wide range of ages among the group’s artists is one of its strengths, Wessecker said.

Instrumentalists under 10 rehearse alongside musicians over 80, gaining wisdom and coaching from their elders, who in turn are invigorated to play with a new generation of performers.

â€œI try to tell people this is the best way to go because music has no age,â€ Wessecker said.

â€œThey work together, they make music together. It’s an incredible group.

For Wessecker, the pandemic is the last wrinkle in the 30-year history of the organization she helped found among a group of home-schooled musicians in 1992.

She developed the orchestra among her students, then supplemented it with adult players at the suggestion of her father, “who added the ‘and friends'” to the orchestra’s name, Wessecker said.

The late Tom Patton also helped her organize her repertoire based on the skills her players needed to develop. When the children needed to sharpen their pizzicato (plucking the strings), they chose Tchaikovsky’s Symphony No. 4, which highlights technique in its third movement.

â€œWe don’t choose the easy things,â€ Wessecker said. â€œWe want them to rise to the challenge.

However, despite all the rigor of its program, the orchestra is an upcoming program. No audition is organized and players of all levels are welcome.

â€œWe’re just making room for everyone,â€ Wessecker said. â€œYou are welcome and we will integrate you. The earlier kids start, the more they like it, because other kids do. “

The orchestra typically gives performances around Memorial Day and Thanksgiving, with rehearsals in the spring and fall leading up to them, and a summer camp in July. Wessecker is still preparing his schedule for the 2021 season, but plans to continue weekly training at his mother’s home for the foreseeable future.

“We have not had a single complaint [from the neighbors], “she said.” Everyone supported me a lot.

Wessecker also hopes that the opportunity for young musicians to develop in a positive environment will also inspire them to keep playing to see where their talents can take them.

His own journey with the violin began at the age of four; by the time she was in college, her guidance counselor paled at the idea of â€‹â€‹making a career out of it. Not long after, Wessecker was performing in the Musical Christmas Tree show at The Gallery mall in Philadelphia when she was debauched by the string arranger Smokey Robinson.

â€œHe literally needed a player that night and said, ‘Do you want to play a concert?’ Wessecker recalls. â€œFrom there, I joined Paul Anka and Barry White. I have been very lucky; it was so much fun. I wouldn’t trade it for the world.