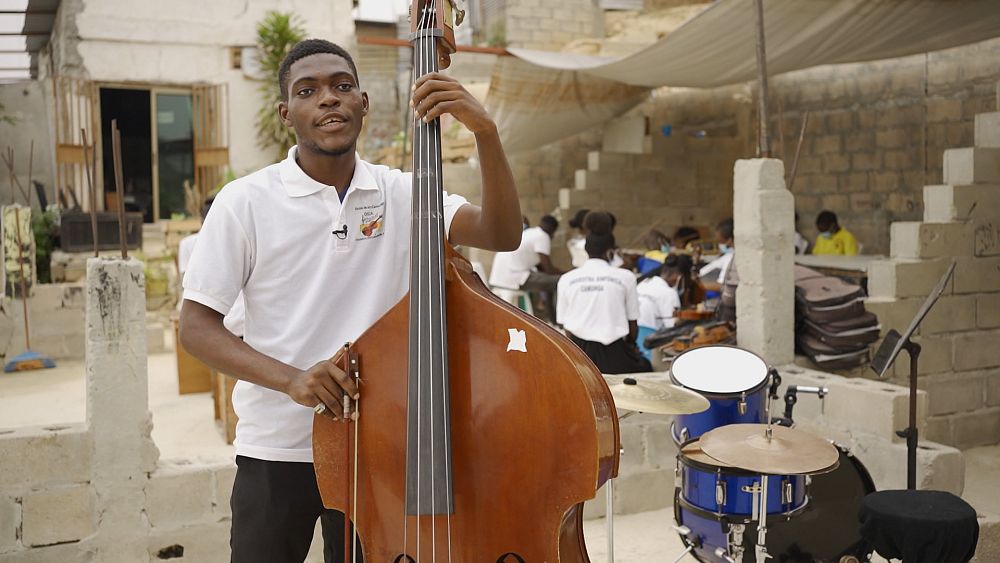 Over the past decade, the Camunga Symphony Orchestra music school in Luanda has been polishing the rough diamonds of youth and changing their lives for the better.

The school and the orchestra take their name from its founder Ntumba Malamba Camunga. Camunga means “a little thing that is born, grows and then shines”, the founder tells us. He thinks the name is particularly appropriate for this school because “it started as a small project, then it grew and now it shines”.

The school was established in 2011 with just five students. 10 years later, there are now 450 students and some of them have even become teachers at the school.

Not all students who attend the school come from well-to-do backgrounds and happy backgrounds. Ntumba Malamba Camunga explains that the school helps many street children, “children involved in delinquency, drugs and even prostitution”.

Kelson Bento Afonso is a student with a difficult past. He now considers the orchestra as his home, his family and his place of comfort. But he has come a long way to make that happen. Kelson admits he hung out with people who behaved badly, people who were also violent.

After going to a party with some students from the school, Kelson visited the school and met the principal, Ntumba. He was welcomed with open arms. His motivation was the main band playing. He says it moved him and he wanted to be like them.

Kelson’s progression was gradual. He first learned the viola for three months, but then the teacher realized that his true calling was wind instruments.

However, it wasn’t just the right path for Kelson. He picked up bad habits. He took things he shouldn’t have had and got sick from it. When Ntumba realized that Kelson had stopped coming to classes, he went to his house to encourage him to come back. It worked and Kelson was able to start playing music again.

Some music school students have to travel very far to get to class. This is the case of Delcio Macedo, 13 years old. He travels 56 kilometers just for the music. He is passionate about the violin. “The music is really in his soul,” says his mother.

Part of the orchestra’s operations is to fight against malnutrition. As Ntumba says, “you can’t do much on an empty stomach”. Students can eat at school.

The symphony orchestra is also community driven and dependent on donations. Once the students have reached a level of mastery of their instruments, they themselves become teachers there. This is what Ntumba describes as giving back what you take.

The Camunga Symphony Orchestra and the school go beyond the music, as Kelson aptly puts it, the people you teach have to grow, “it’s the only way to change the country”.