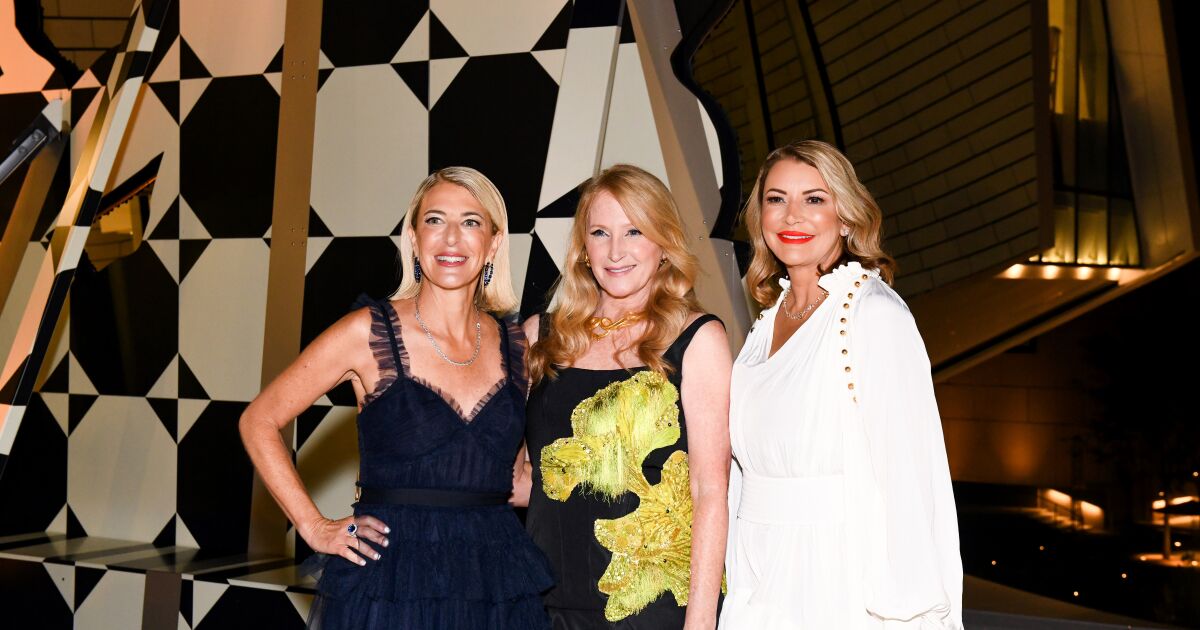 The culmination of decades of community goals came to fruition in a series of celebrations welcoming the opening of the new Orange County Museum of Art (OCMA) museum building in Costa Mesa.

The highlight of the many events included opportunities for OC citizens from all walks of life to experience the arts complex, was a grand opening gala which raised $2.1 million.

Heidi Zuckerman, chief executive and director of the OCMA, hosted what organizers called the Art Sense Opening Gala. The stunning modern party, creatively designed and tailored to the premiere of a 21st century contemporary art museum, was chaired by Jennifer Segerstrom and co-chaired by Lisa Merage. The two women were fervent followers of the monumental project which required an enormous amount of time, talent and treasure to bring to life. This gala evening largely belonged to them both.

This was actually the second sold-out annual Art Sense gala, with the first being a prelude to what would eventually be the museum’s opening.

A dress code called “Utopian Black Tie” and some 400 guests required. The utopian idea, yearning for a better, kinder and wiser future, was indeed also evident in the finished architecture of the museum’s very modern structure rising on land adjacent to the Segerstrom Center for the Arts.

The land was donated and set aside many years ago by the late Henry Segerstrom and his family, all of whom were instrumental in making the dream come true. Mostly among the family, Henry’s son Anton Segerstrom, husband of Jennifer Chair. The couple have been the standard bearers for their father’s love of art and legacy of pursuing excellence in all aspects of life. They joined Henry’s widow, Elizabeth Segerstromat the forefront of the gala, who also carried this very unique torch.

(As a preview, Elizabeth will produce a celebration of the 100th anniversary of the life and achievements of Henry Segerstrom in 2023, in association with South Coast Plaza, and many other local, national and international activities of the late visionary.)

Among the crowd exploring the museum, admiring all the marvels of the structure designed by Morphosis Architects under the guidance of the Pritzker Prize winner Thom Mayne and responsible partner Brandon Welling has been Sanford’s Greatest, honored special guest artist of the evening. He joined the artists present, including Doug Aitken, Fred Everley, Alexander Grant, Stone Shelton, Lily Stockman, Fred Tomaselli and Lauren Claquin.

Chairman of the OCMA Board of Directors Craig Wells and his wife, Sandy Keith, joined the new Chairman of the Board lucie sun and her husband, Warren Felson. Significant donors in the museum’s opening crowd included the highly philanthropic Martha and Raj Bhathal, Moti and Idit Ferderand co-chair Lisa Merage with her husband, Richard Merage.

The glamorous social dean of the CO, bicoastal philanthropist Elizabeth Segerstrom Manhattan and Newport Beach had a very busy week. In addition to her important role in supporting the opening of the Orange County Museum of Art, she was also president of the Opera Ball in Los Angeles. She was a serious opera champion in Europe, as well as in New York and Los Angeles, and with great passion also supported the efforts of the OC.

LA Opera recently opened its 2022-23 season with a performance by Lucia di Lammermoor at the Dorothy Chandler Pavilion in Los Angeles. The production is a partnership between LA Opera and the MET Opera New York City. Opening night was followed by the Opera Ball held at the Music Center‘s Jerry Moss Plaza.

Joining Segerstrom at the opera ball were Casey Reitzpresident of the Segerstrom Center for the Arts; Jane YadaSCFTA Board Chair and Special Guest, Grammy Award-winning mezzo soprano Suzanne Graham with her husband, Brakeley Clay.

Support our coverage by becoming a digital subscriber.

How real estate agencies will use business loans in 2023