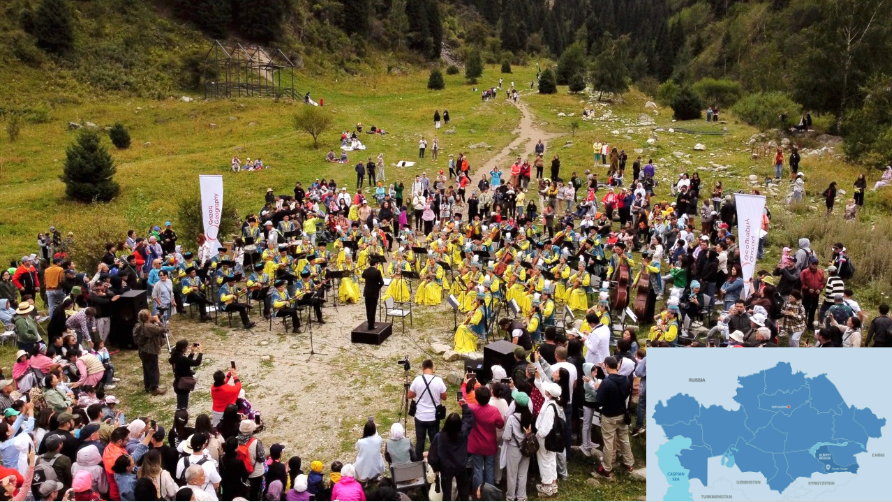 NUR-SULTAN – The open-air concert of the Kurmangazy Folk Instrument Orchestra gathered more than 500 guests in the Ayusai Gorge, located in the Almaty region, on August 20, the press service reported. by Qazaq Geography.

The musicians ended the concert with a kui “Makhambet” (traditional musical composition) by Nurgisa Tlendiyev and dedicated this composition to the founder of the Tengrinews.kz agency and public figure Batyr Kazybayev, who died on March 27 this year.

“Thank you so much for such a creative gift. The sound of the folk instruments in the open spaces and the mountainous areas is amazing. We felt a connection with nature, the music and everything that happened was very natural and harmonious” , said one of the spectators Aidana Akhmetova.

According to conductor Abylai Telepbergen, the orchestra members agreed to play each other’s favorite compositions on the mountainside.

“We expressed our love and gratitude in music, because music awakens the best in us, unites us and inspires us like nature,” Tlepbergen added.

The Kazakh State Academic Orchestra of Folk Instruments was founded in 1933 in the city of Almaty as a dombra ensemble (a traditional Kazakh musical instrument) and named after the great Kazakh composer and dombra player Kurmangazy in 1944.

A few days ago, Kazakh President Kassym-Jomart Tokayev announced the construction of the Center for the Creative Development of Children named after Kurmangazy in Fizuli, Azerbaijan during his August 24 meeting with Azerbaijani President Ilham Aliyev.

The Ayusai Visitor Center located in the Ile-Alatau National Park in the Almaty region posted a video of the event on its Instagram account.