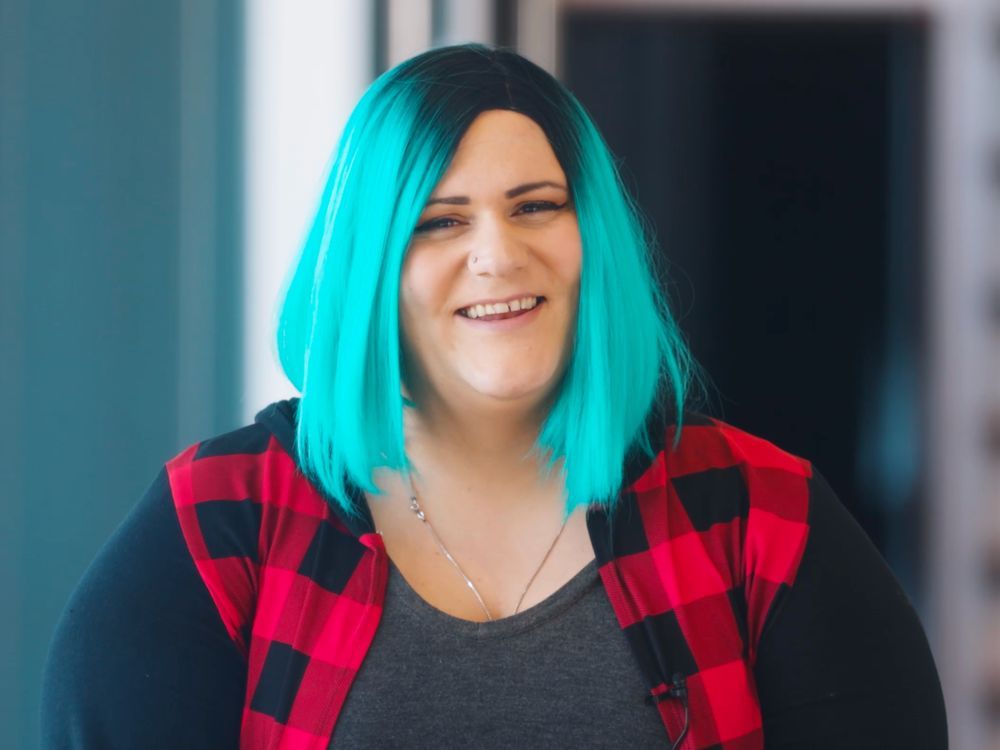 The story of trans comedian Cindy Rivers is one of four stories told in BOUND, a lyrical documentary about belonging

Reviews and recommendations are unbiased and products are independently selected. Postmedia may earn an affiliate commission on purchases made through links on this page.

Cindy Rivers is a woman with a mission. The feisty Edmonton comedian and actor with an earthy sense of humor is passionate about helping society understand and accept trans people.

However, when she began her own journey to sex reassignment surgery in Fort McMurray six years ago, she could not have known that she would end up being a major character in an adventurous and captivating new hybrid of film and of opera.

BOUND is the latest creation from Toronto’s Against the Grain (AtG) Theatre, co-directed and with a libretto by Joel Ivany, who recently moved to Edmonton to become Artistic Director of Edmonton Opera.

The new work had a long gestation – it was seen in Toronto in two previous iterations before ending up in its final form as an opera film. It is now streaming online, for free, until April 24.

It features four Canadian pioneers telling their stories. They remind us that beneath Canada’s traditions of acceptance and diversity, there are those whose sense of identity is questioned and denigrated.

Dr. Zulfikar Hirji immigrated to Canada from Uganda in the 1970s as a political refugee, but faced racism and intimidation in his new homeland. He is now an Associate Professor in the Department of Anthropology at York University.

Dr. Nadiya Vasdani was born in Toronto and studied medicine in the Caribbean. She found her identity as a healthcare professional devalued in Canada when she faced hospital picketing during the COVID-19 crisis.

Rania Younes learned her university degrees from Dubai in marketing and psychology and her background in advertising would not help her much in her new country, despite her work with multinational companies. As she says in BOUND, “Arab women, in particular, have very high unemployment rates.”

And then there’s Rivers, who has experienced first-hand the intolerance of being transgender.

“A lot of trans people are quiet and don’t want people to know about their lives and that’s cool,” she says. “It’s their prerogative. Not me. I have no secrets.

Their stories are collected in a fast-paced documentary, with the four interviews interspersed with visuals ranging from news clips to Canadian shots. The common theme through the film is the feeling that their identity is questioned and that they feel different.

As it unfolds, the other plot of this documentary is gradually revealed: lyrical music. There are four performers, each representing one of the four storytellers. The music they sing is based on tunes by Handel with altered lyrics, transposed into a 21st century context with arrangements by Toronto composer Kevin Lau, who also created the film’s evocative unvoiced music.

River’s operatic alter ego is American soprano Breanna Sinclairé, herself a trans woman, one of the few on the North American opera scene — indeed, this must be the first time a woman trans sings the role of a trans person in opera, and it’s a welcome development.

“It was very affirmative,” Sinclairé says. “It has been a fantastic project for me. I really felt like I was taken seriously as a classical artist. It was really nice to work with other classical artists that I can agree with, and to be welcomed as a period artist, even before I could tell the story.

Rivers herself was new to opera and found a very different and more complicated artistic world there.

“There are a lot more moving parts so I had a hard time understanding it, even trying to explain it to people. They asked me: ‘What did you do?’ I said I was in an opera. Well, no, I’m in a documentary with an opera. And they’re like, ‘Wait, what do you mean?’ ”

It is the lyrical side of this film which gives it additional strength. The alter-ego singers seem to represent the soul of the storytellers, and what they sing are not the stories these four have told, but the feelings behind them, the yearning for identity, the determination that we should all be recognized and honoured. for who we are, as human beings.

If the interviews and conversations in this hybrid documentary are the four storytellers as physical beings, then the music and song are their spirits – and their spirituality.

It’s a powerful and revolutionary combination, a must-have not only for what it says about Canadians, but also for its artistic verve and musical power.

It’s hard-hitting at times – Rivers herself hopes “it’s as hard for other people to sit down as it is for me”.

Everyone now has the chance to experience it: BOUND is available to stream on the Against the Grain site until April 24, for free if you sign up.

Next, Edmontonians can see Rivers live at the Comic Strip, as part of the Funny Person with a Day Job contest, which runs May 3-24.

Diffusion: Free on atgtheatre.com until April 24

Sign up to receive daily news from the Edmonton Journal, a division of Postmedia Network Inc.

Thank you for your registration!

A welcome email is on its way. If you don’t see it, please check your spam folder.

The next issue of Edmonton Journal Headline News will soon be in your inbox.

We encountered a problem during your registration. Try Again

Payday Loans for Military Personnel: The Good and the Bad | Payday Champion