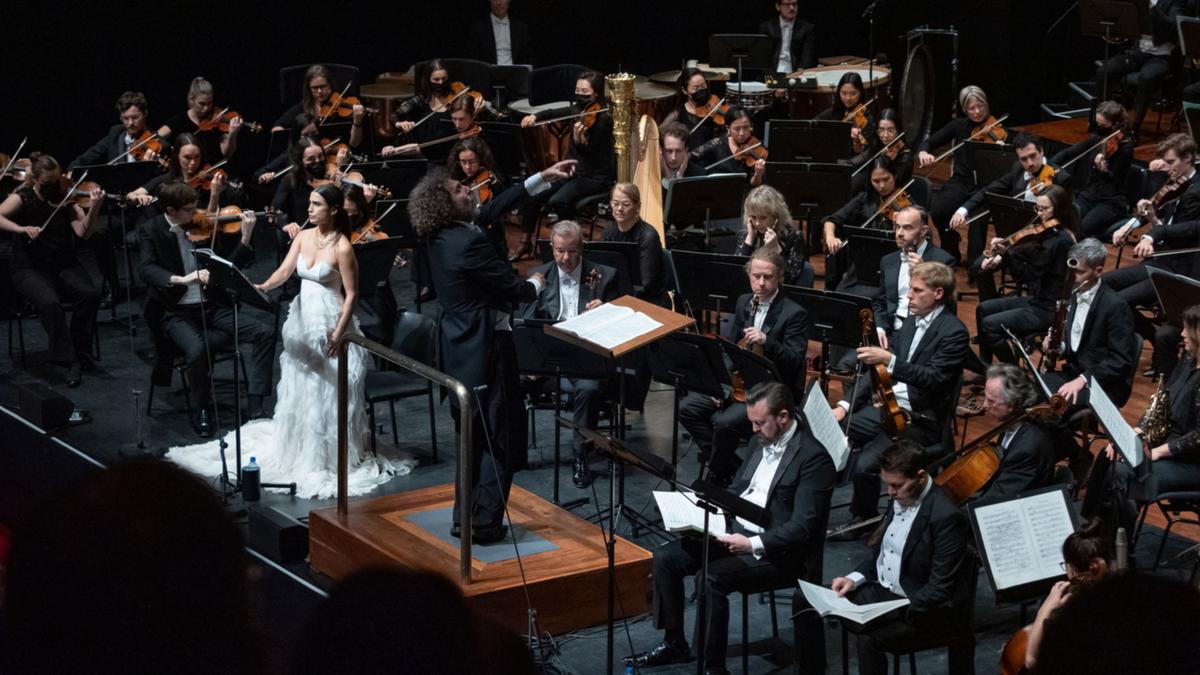 Rumbling graves and the tinkling of bells rang out in Benjamin Britten’s War Requiem at the Concert Hall on Friday; stupendous chords and whispers in the choir intoning a plea for eternal peace – a hope that Britten and her poet-elect Wilfred Owen have seen dashed in a century of conflict.

The clash of a traditional Latin mass with Owen’s war gutting in verse is matched by Britten’s eclectic musical mastery; a large company of 250 souls, all with eyes on the catwalk.

Asher Fisch took on the challenge, with the principal conductor of the WA Symphony Orchestra coordinating his own players and those of the Australian National Academy of Music with singers from the WASO Chorus, Tasmanian Symphony Orchestra Chorus and the Aquinas College Schola Cantorum, as well as three soloists in a powerful hymn to pacifism. -too-rarely heard.

The fog and friction cloud and frustrate the fights, but here the balance and clarity of the vocals have been maintained until the last amen, with reflections in all parts.

Ethereal boys’ voices on a plaintive organ drew massive choirs accompanied by a full orchestra to launch tenor Paul O’Neill into Owen’s anthem for Doomed Youth, clear in tone and diction to evoke “The shrill and demented choirs of moaning shells; And bugles calling them from sad counties.

“Dies irae” (Judgment Day) rose in trumpet and trombones descending to tuba, multiplied by horns, answered by a ghostly choral line from the high stalls; the bravery of the brass moving the reverence with a martial fury to summon the baritone David Greco in a sonorous and solemn soliloquy: “The bugles sang, saddening the evening air.

Soprano Elena Perroni sang the next stanza — “Salva me, fons pietatis” (Source of pity, save me) — as a duet with the horn, delicately joined by the choir; their charm broken by the snare drum and the vernacular and military pairing of tenor and baritone, sharp and brusque in Owen’s The Next War: “There we marched friendly enough to the death.

The trumpet fanfare sounded in a more Latin liturgy – “Recordare Jesu pie” (Think, gentle Jesus) – a rolling choral wave amplified by percussion and backed by soaring brass, plunging from high to low register with meandering reflections of the woods before launching into the baritone in a macabre salute to murderous power: “Rise slowly, you long black arm, Big gun towering towards the Sky.

The choirs responded with a chilling echo of the Dies irae, suddenly calmed by the soprano – “Lacrimosa dies illa” (Ah, this day of tears and mourning) – an operatic lament tempered by religious feeling; matched by the wind and the choir in liturgical rhythm.

Cue tenor – “Move him to the sun, gently his touch woke him once” – a poignant call again showing the pedigree of opera; adding profane luster to the sacred, answered by the chorus in a numinous amen.

The voices of the boys opened the Offertorium, their simple, beautiful sound answered by a chorus invoking St Michael, the standard bearer, to lead the biblical sacrifice of Isaac.

Owen’s take on this – The Parable of the Old Man and the Young – is central to the synthesis of Britten, O’Neill and Greco as a duo adding another texture to the great tapestry, as the man defies God’s pleas to spare the youth: “But the old man would not, but killed his son – And half the seed of Europe, one by one.

The boys softly chanting the sacrifice added ice to the fire.

Soprano led the Sanctus – Holy, holy, holy – a shrill proclamation over discordant bells wreaking havoc on the choir and main orchestra; igniting the brass and percussion for “Hosanna in Excelsis” (Hosanna at the highest), then falling to the quitus for the “Benedictus” (Blessed be He).

Perroni rose effortlessly above the tight ranks before ceding center stage to the baritone; Greco now relaxed with the crisis of the past battle: “After the thunderbolt from the East. . . Will life renew these bodies? — a dark, brooding soundscape emerging from Britten’s kaleidoscope.

O’Neill kept the mood, presenting a wild contrast in Owen’s excoriation of commissioned chaplains confined to the rear echelons – “Near Golgotha ​​walk many priests” – while the soldiers suffer: “But those who love the greatest love give their lives, they do not hate”.

Answered by the choir in “Agnus Dei” (Lamb of God), O’Neill joined with a lighter-than-air cadence over a whispered chorus: “Dona nobis pacem” (Give us peace).

Finally, the war drums led in “Libera Me” (Deliver Me) with languid choral lines over ominous low strings.

Perroni urgently joined for “Tremens factus sum ego” (I am in fear and trembling), a full-orchestral pulsation drawing a renewed drama in echoes of the Dies irae – with Verdi notes – massive in conclusion before sagging in waves to leave O’ Neill alone on stage.

A quietly revealing moment spoke of death and transfiguration, joined in dialogue by Greco, then a solo baritone recitative working on an episodic accompaniment towards reconciliation: “I am the enemy you have killed, my friend”.

All forces united for the final prayer “In paradisum” (In paradise), a quickening crescendo with soloists hovering above the swell and bells ringing before the boys return to the opening “Requiem aeternam” (Eternal peace ); to be answered with a gentle dismissal, “Requiescant in pace”, and a lingering amen.

WASO is rehearsing War Requiem on Saturday August 20 and returns to the Concert Hall on August 26-27 with Cinematic.