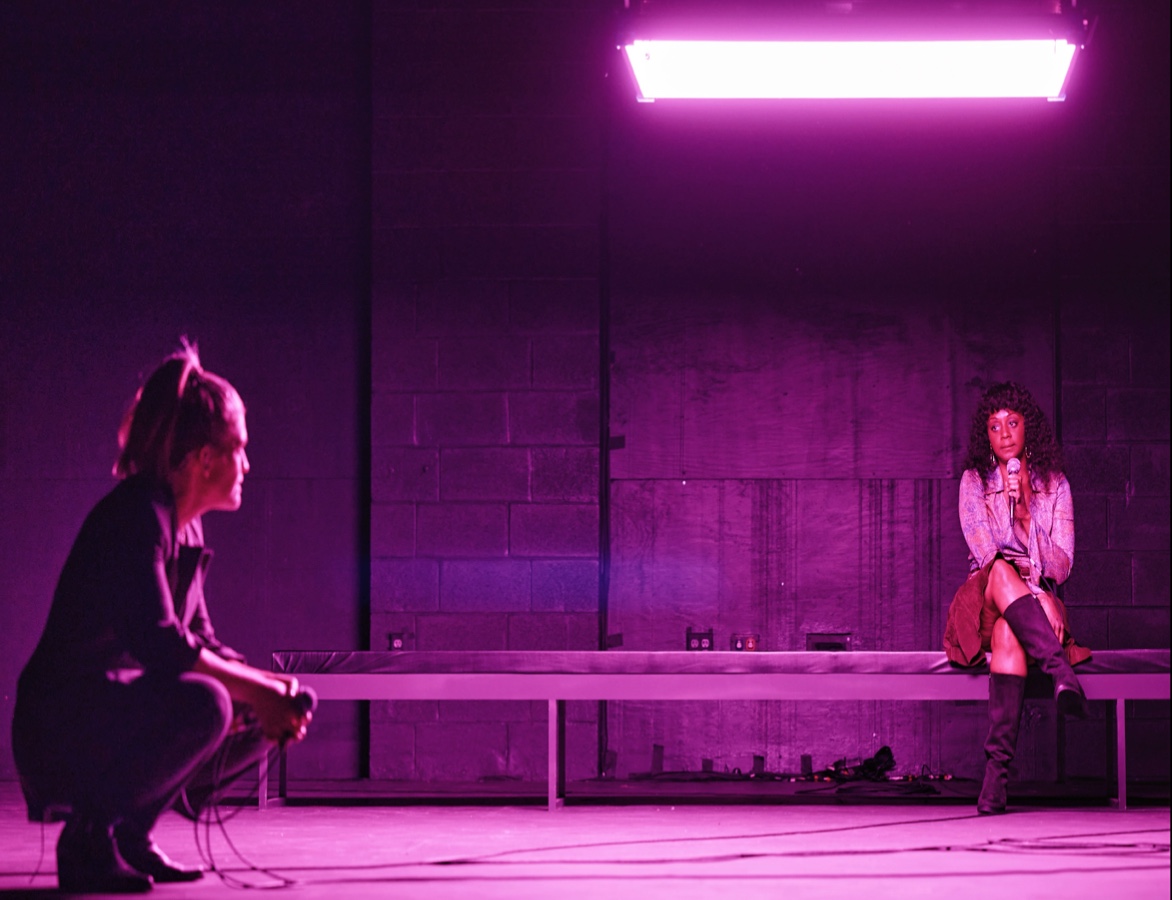 THEATER REVIEW: Unhappy with ‘Most Happy In Concert’ at Williamstown Theater Festival

The happiest in concert
Williamstown Theater Festival in Williamstown, Mass.
Designed and produced by Daniel Fish

“This little pig is the smallest little pig but ab’s fat son hurts the most.”

According to the program, nine singers perform for this particular show on the main stage of the Williamstown Theater Festival, although I can only count seven, as seen in the final photo below. They perform the score to Frank Loesser’s masterpiece, an all-composed 1956 musical based on a 1924 play that had numerous Broadway hits and was made into a film starring Charles Laughton and Carole Lombard. The fat, clumsy and aging Italian winemaker from Napa Valley is played, in this current version, by Mary Testa. In fact, every character in the series is played by a woman, and sometimes by more than one woman, it seems. Director Daniel Fish has produced a most confusing take on this world-class classic. His team, comprising an off-stage group of twelve talented players, works in the darkness of the stage. It’s almost never possible to locate who’s singing, but when you do, you still can’t see her or them or her/they. In fact, when five of them get together to sing the hit standard “Standing on the Corner Watching All the Girls Go By”, the show ventures into the realm of “The Happiest Lesbians”.

The women enrolled in the program are Tina Fabrique, Maya Lagerstam, Erin Markey, April Matthis, Mallary Portnoy, Mary Testa, Nicole Weiss, Kiena Williams and Gwynne Wood. I don’t know who sang what songs, what roles except for Testa who started out as a stage two postman turning into Tony Esposito, an operatic bass worthy of the Metropolitan Opera House. There are four people listed for musical arrangements (Daniel Kluger and Nathan Koci) and vocal arrangements (Nathan Koci and Daniel Fish) with Daniel Kluger listed as orchestrator. What they’ve done is shift the traditional musical settings from 1950s beauty to 2022 cacaphony and disharmony with altered tempos turning exuberant Italian songs into killer chants and ballads into rhythmic swing numbers. , all accompanied by the worst sounds of the orchestra. Five great songs were cut.

Besides not knowing who was singing what roles, or from where in the cavernous Williamstown scene, there were no connectors or narration. If you didn’t already know the show, you’d never know who was supposed to sing, what in the book prompted the song, or what it would lead to in the story. A few cherished musical numbers have been eliminated completely, and except for a brief musical interlude, the dance arrangements and dance music have been completely cut, leaving only one danced number, I believe, by Erin Markey , though I could be wrong, choreographed by Jawole Willa Jo Zollar, who may have choreographed the handheld microphone cords. There’s also a last striptease scene in the dark so we don’t see it, we just hear it.

Set designer Amy Rubin used what appears to be a Las Vegas show curtain as her signature design element. It eventually becomes a cheeky prop that fans singers with exuberance and also becomes the primary costume change for most singers thanks to costume designer Terese Wadden, who clearly understands the pattern when she designs.

The singing is good even when the songs don’t work with the singing voices. Loesser made a major teaching point in his lyrical writing about male versus female lyrics. He used specific sounds and words that he felt identified the songs as masculine or feminine. I believe he would be both dismayed and embarrassed to see his theories so flouted. Thomas Dunn gave us a negative light.

This presentation is neither a good representation of a great musical nor a tribute to its creators, Loesser and before him Sidney Howard. It’s a bold experiment that falters on its stage leaving an impression of nothing good, nothing exciting, nothing worthwhile. And that’s the best that can be said for this musical showcase of talent. It’s 72 minutes were, and are, not worth it.

“Most Happy In Concert” performs on the Main Stage at the ’62 Center for Theater and Dance at Williams College, 1000 Main Street, Williamstown, MA until July 31. For tickets and information, call 413-458-3253 or visit the Williamstown Theater Festival website.

Get the latest news and events straight to your inbox.