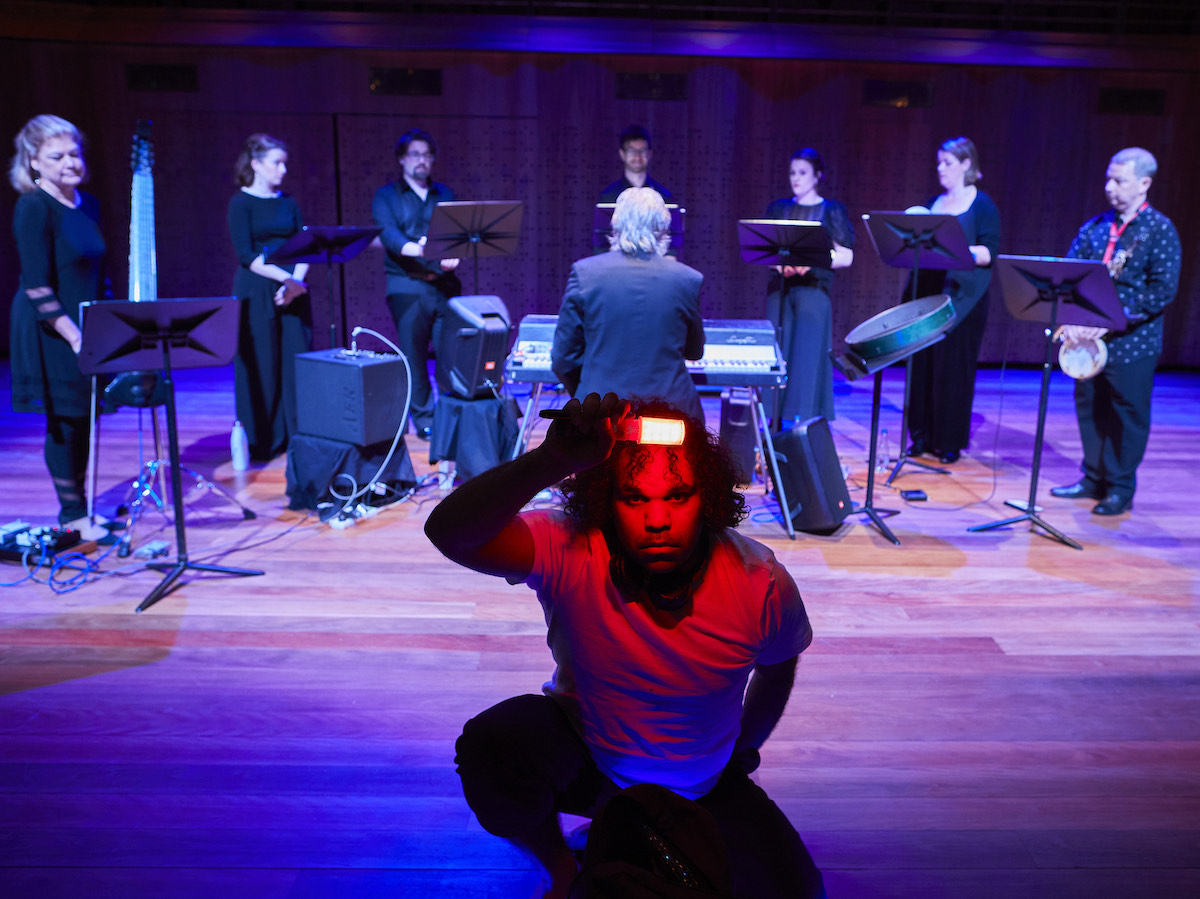 Weapons of Love (The Song Company)

In this new program from its MainStage series, the Song Company performs the seven-part oratorio by Dietrich Buxtehude Membra Jesu nostri patientis sanctissima (1680), intertwined with a world premiere of Chris Williams’ I pray to the sea, and staged with choreography by Thomas ES Kelly (Karul Projects) performed by dancer Neville Williams-Boney. The Song Company is not the only band to juxtapose new Australian compositions with key works from the European musical canon, and to introduce extra-musical elements into its programming. But here the works were not only placed side by side, rather they were intertwined in unexpected ways that highlighted their interrelationships and placed us in the here and now.

The Song Company’s collaboration on this project also brought Jenny Eriksson from The Marais Project and Hylton Mowday from We Love Jam. With their involvement, the continuo part that would be regularly played by a few string players and a baroque keyboard instrument was rendered here by soprano saxophone and electric viola da gamba, with musical director Antony Pitts exploring the timbral possibilities of a Rhodes keyboard. It was radical, but not bad either, as if playing Buxtehude that way might reveal something different than what we might normally hear. Mowday’s bright, vibrato-free tone in the opening movements of the Buxtehude might have misled the listener to the fact that it was some sort of baroque wind instrument that couldn’t quite be put on finger. His playing gradually blossomed throughout the program into the vibrato and portamento influenced sound that we might be more inclined to expect from this instrument. It was partly the concept and the overall design of the program that made it all possible.

In his introduction to the concert, director and ensemble tenor Robert Macfarlane suggested that the movements of Williams’ new piece would “overlap” Buxtehude’s cantatas, rather than be evenly interspersed. And indeed, the ensemble immersed the audience in three of Buxtehude’s cantatas before the opening notes of Williams’ work sounded. Throughout these movements, Williams Boney’s irresistibly supple and sensual dance oscillated between foreground and background as the music alternately drew attention to its motion landscape, then the choreography drawing upon the mime, character work and contemporary and classical Aboriginal dance practices were eye-catching. I found it overwhelming at times – the sound and vision could have captured my full attention, and at times I felt like I couldn’t absorb either. 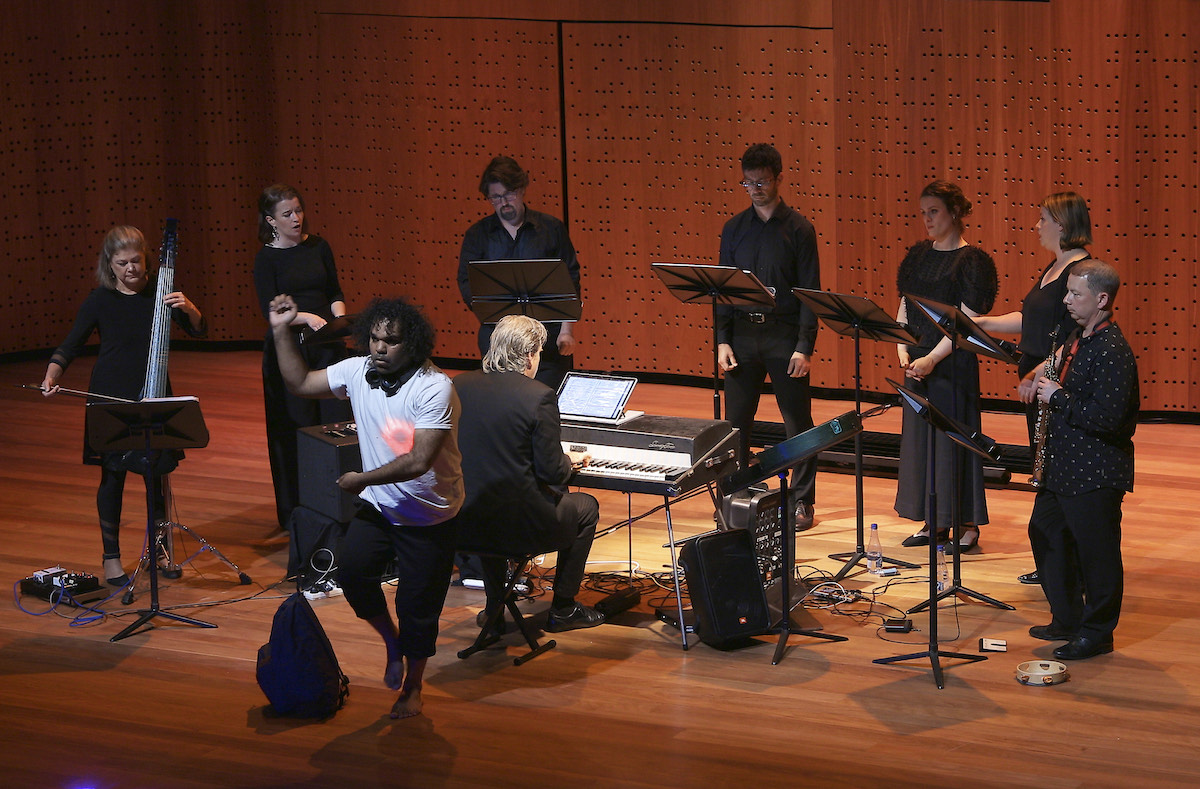 Not only the programming, but also the performances gave meaning to this unusual ensemble and to the transitions between sounds from different centuries and distant continents. Singers savored the dissonances of Buxtehude’s oratorio in a way that seamlessly led to Williams’ exciting new work. In his movements too, I pray to the sea shifted from sustained sections echoing the Buxtehude to more rhythmic movements driven by text and percussion. The sounds of Williams Boney’s feet and breath moving through space that punctuated Buxtehude’s first three cantatas also prepared us for this new world of sound – for the variety of percussion played by Mowday and Pitts, and for the breath percussive and the vocal effects of the singers. It was not a concert of hushed silence in reverence for high art (although not a pin drop was heard from the audience), but rather a concert meant to get us thinking and engaging with ideas as well. only with sound and movement.

Williams’ new work draws primarily on Behrouz Boochani’s text from his award-winning book No friend but the mountains – written while Boochani was incarcerated on Manus Island due to Australian government policy and despite his legitimate legal claim for asylum. The programming of the two musical works as well as the performance of Williams Boney, which he began by introducing himself as a dancer from Wiradjuri and questioning what this country is, put these varied works in relation to the place and time.

The singers (Amy Moore, Brianna Louwen, Stephanie Dillon, Robert Macfarlane and Thomas Flint) were excellent-voiced as usual. Sure tonality and the kind of blend that allows each of the five voices to be heard in their individual clarity and beauty, without ever detracting from the cohesiveness of the whole are hallmarks of The Song Company. Soprano Brianna Louwen was a stunning newcomer to the group, with an almost improbable bell-like clarity in her upper range that both cut through and filled the space, while blending into the whole. The singers were also lightly choreographed, running lights that illuminated different parts of the singing, dancing and performing bodies throughout the performance. I wasn’t convinced of the purpose of the brightly colored lights that Williams Boney used throughout, until two scenes where they produced dancing figures on the wall behind the singers, and then later when the red light formed a heart beating under his white shirt while Ad Cor (In the heart) – Sixth cantata by Buxtehude. Some of the props, backpacks and drink cans remained mysterious staging choices – but as Macfarlane told the audience in his introduction, it was a story, if it had no beginning. , middle and end. 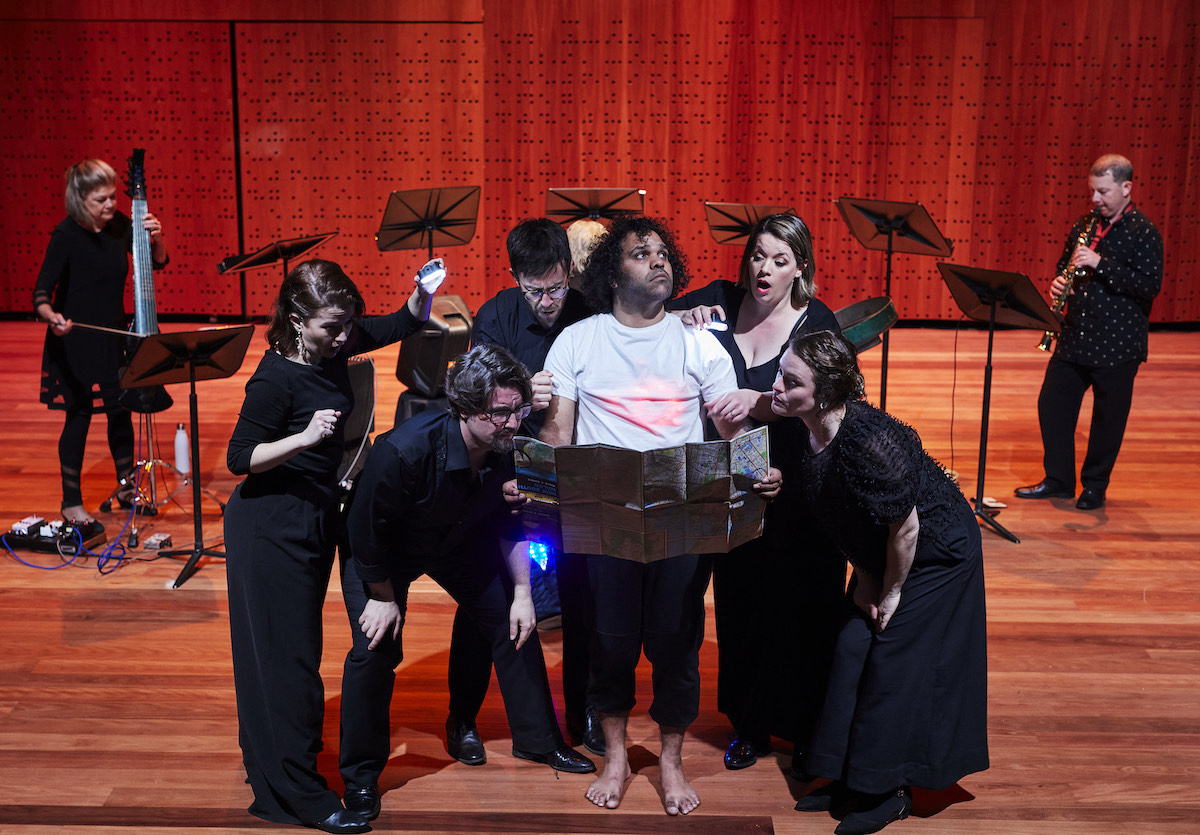 It was the kind of concert that can make us sit up and take notice, in which many stories can be intertwined. The fluidity between centuries, continents, art forms and meanings gave new resonances to each part of the program – inviting audiences to re-hear old works and placing the program in relation to where we we find and the country where we find ourselves.

The Song Company performs arms of love at Abbotsford Convent, Abbotsford, Melbourne on September 4 at 3 p.m.