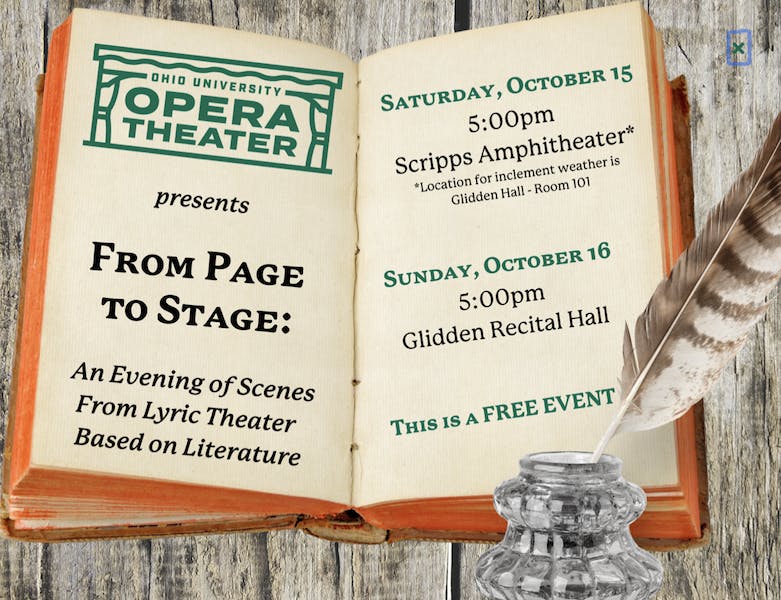 The Ohio University Opera Program presents its first performance of the year, “From page to step“, Saturday and Sunday at 5 p.m. The show will be free at the Scripps Amphitheater on Saturday and Glidden Recital Hall on Sunday.

For those unable to attend in person, the performance will be streamed online and can be found on the School of Music website website and their social media accounts. The show consists of 13 scenes, the longest being between seven and eight minutes.

Daniel Stein is Assistant Professor of Classical and Musical Theater Voice Education at OU. In addition to this, he recently became the coordinator of the opera theater program.

“I was part of college vocal music programs for a long time, but I was never in charge of the opera program,” he said. “It was a new experience for me, but I really appreciate that we were performing in non-traditional theater spaces.”

This performance has been running for six weeks with undergraduate and graduate students working as both performers and directors, providing a unique educational experience.

“We do a program of opera stages every fall that we try to give ourselves some experience,” Stein said.

Benjamin South, a freshman graduate student in vocal performance and pedagogy, will direct and perform in the show this weekend.

South earned her undergraduate degree at the University of Alabama, but finds OU’s graduate program to be much more rigorous.

“Not only do I take lessons, but (I teach) and I also play,” he said. “The workload is much heavier, but it’s really productive and it’s really rewarding.”

Although this program is a lot of work, it seems to be paying off according to Stein.

“To see them put this whole process to work and make more informed decisions and really bring these characters to life and not be themselves for a while is a lot of fun,” he said.

While this performance exists to entertain audiences, it also aims to be a learning experience for actors and directors.

“Part of my job as opera program director is to help them develop their skills on how to be on stage, how to interact with other characters and how to develop the characters themselves,” Stein said.

As an opera performance and an educational experience, there were some learning curves, especially with the show presented both outdoors and indoors. Stein said staging should be adaptable to any performance space.

Doug Grimm, another freshman graduate student in vocal performance and pedagogy, has been performing since 2007, but this will be his first performance with the Opera Theater at OU.

“The outside is definitely different, mostly because we’re not miced, the opera is never miced,” he said. “If we sing outside, you have to be full blast all the time.”

Another thing the show wishes to accomplish is to provide the audience with a true understanding of what opera means.

“Everyone thinks opera is for the elite, and it’s really something that I want to get as many people (as possible) to see that it’s not necessarily (like) that anymore,” he said. Stein said.

For South, the upcoming show offers a more unique experience than other performing arts.

“I think it’s always important to experience the arts, but most of all I think (this show) offers a diverse performance because there’s musical theatre, there’s opera and there’s different languages,” he said.

As for Grimm, opera is more about the effect it has on the audience.

“The audience goes from there saying, ‘I feel rejuvenated, I feel energized, I feel like I can see the world differently,’ and if they didn’t feel that way by the end, then we we’re not doing our job,” Grimm said.

“It would be so much easier for us to sit down and watch a Netflix special instead of going to see the opera, but the opera connects with us in a way that looking at our screens doesn’t” , did he declare. “It’s definitely something not to miss.”